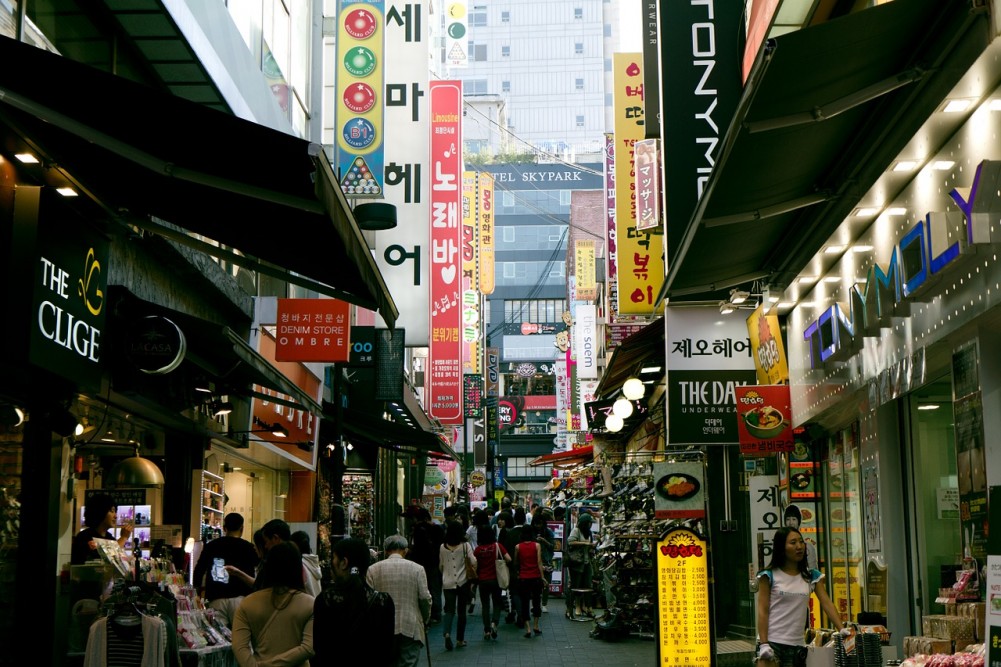 The author speaks about the everyday, simple freedom for women in South Korea, that she feels is sorely missing from patriarchal Indian society.

After a long weekend, the Monday blues shifted to Tuesday greens as I rushed through my morning finishing all the chores and ran to catch my bus.

These days my husband and our son accompany to my bus stop. As always, I was running late, and they left the house ahead of me – hubby saying, “We can’t compete with your Maa in her usual run son!”

True. Every morning, no matter how early I wake up, I end up running to get on to our office bus which stops just a 5-7 min walk from our house. I run to reach it in just less than 2 min. Today, the husband had the camera rolling and recorded my race, running after me with our giggling toddler in his arms. On my way a stranger working at a construction site greeted me with a Korean “hello!” touching his cap and I wished him back. Short of breath, I reached the bus huffing and puffing and sat on the seat next to our lab’s sweeper. We exchanged our morning greetings and I looked out of the window to see my later-than-me-colleagues running too.

It is a familiar morning scene for me. As I glanced at all the Independence Day messages in my FB and Whatsapp account (commuting time-pass), I realized that this every day routine has at least three peculiar liberties which I enjoy here in South Korea, and I wish the same can be done in India too.

Incidentally, India shares its Independence Day with South Korea’s National Liberation Day – 15th August. I quickly jotted down some of the things I look forward to continue when I go back home.

Run in public and nobody gives a dime

As I already mentioned, I run every day so as not to miss my office bus. I run with my backpack in place and my cell phone in hand checking the minutes at every corner. I run through the parking lots of a few buildings, jump over the drains and dividers finding a short-cut to my destination.

But for me, running was a self-prohibited act back in India. I walked faster where I needed to run. Often got comments like Rajdhani express or bullet train on the streets while commuting to and from my college. It all started during my school’s sports day when I first dared to run. Given my tall and lanky constitution (read 5 feet 9 inches) I must have been a sight when I broke into the run. Everybody started laughing and I froze in my track, not able to move one toe. I never ran from that moment on for the fear of people jeering at me, glaring at me, and laughing at me.

When I shifted to South Korea, I was surprised to see people running on the streets. Age no bar, gender no bar, everybody run rather than walk to do whatever they are doing. What was even more surprising was that there was no teasing or jeering from the people around. You don’t turn heads as you run past them on the streets.

Korean ‘pali-pali’ culture is well-known which means “hurry up” or “faster”. The war destroyed most of Korea and left it amidst poverty and political chaos decades ago. But today the country is one of the top largest economies because of its ‘pali-pali’ culture which drove the patriotic citizens to work harder and faster to restore the country and make a mark in the world.

It should not be surprising if I am inspired by this culture and join in the flock. Moreover, motherhood taking away the feeling of embarrassment for a lot of things now, I run like I was born to run. I hope I don’t raise eyebrows if I continue to run after going back to India. “Pali-pali” India.

“Annyeonghaseyo!” is the normal form of salutation in South Korea which can be roughly translated to “please be/to be peaceful” – this is how they acknowledge your presence, whether you are a stranger or friend. You will hear people wishing each other every time they meet throughout the day. I am often reminded of our school days when we had to wish our teachers no matter how many times we see them in a day.

The formal “hello” of Korea is not restricted only to people who know each other. Anybody (read 90% of the people) you make an eye contact with on the streets will greet you with smile accompanied “Annyeonghaseyo!”

Back in India, I would have just ignored the person or might have even stared at him back in anger thinking he was teasing me. But here, it is a way to make everybody feel comfortable. Random people will make you smile by just wishing you a pleasant day. Again age no bar and gender no bar. I am quite sceptical about following this tradition when I go back to India, for I will definitely invite trolling by this act.

Every job is respectable

When I look around myself in the bus or outside, I cannot differentiate between a scientist, a driver, a daily-wage labourer or a sweeper. People are so well-dressed and carry themselves so well that you cannot make out who is who until they are in their workplace wearing their uniforms doing their respective job. At times, my lack of dressing sense added to by the lack of time makes me feel like the odd one out among them.

Most of the cleaning staff consists of women. If anything, the sweepers and cleaners are more respected for they clean the filth we spread. Fondly called ‘Ajumma’ meaning ‘madam’, the amount of respect these people are given irrespective of the work they do is amazing.

Every year, we have departmental picnics and dinners or get-togethers. And the non-differentiating manner with which every worker is treated by everybody earns my respect.

Of special mention and to my great surprise, is the fact that I am yet to meet a male waiter in restaurant, or a male toll gate-keeper in Korea till date. All the toll gates have women carrying out the duties even at odd hours and the drivers passing by the gates behave so well with them that I lose my heart to this country. The waiters or servers are mostly students earning from their part-time jobs and even the regular staff comprise mostly women. It is so heartening to see that their jobs are looked up to and not subjected to demeaning their status. That they are women earns them more respect, and does not make them vulnerable to misbehaviour or entitle them to be objectified.

True, no society is free of all evils. But to a great, and more than great extent, I find this place has created norms which are commendable and worth following. I sincerely wish India too will attain this state soon.

As we step onto the 71st year of our independence and with pride for my motherland celebrating the freedom as an Indian, I thank South Korea for making me more humble and teaching me one of life’s important lessons. Adversities of a nation can be turned to achievements with love and compassion for humanity, taking together people working in every sphere of life, keeping yourself firmly rooted in your origin, and trending the tradition.

A woman who is trying to improve herself as a person, a mother, a researcher,

A Day In The Life Of: Ally Matthan