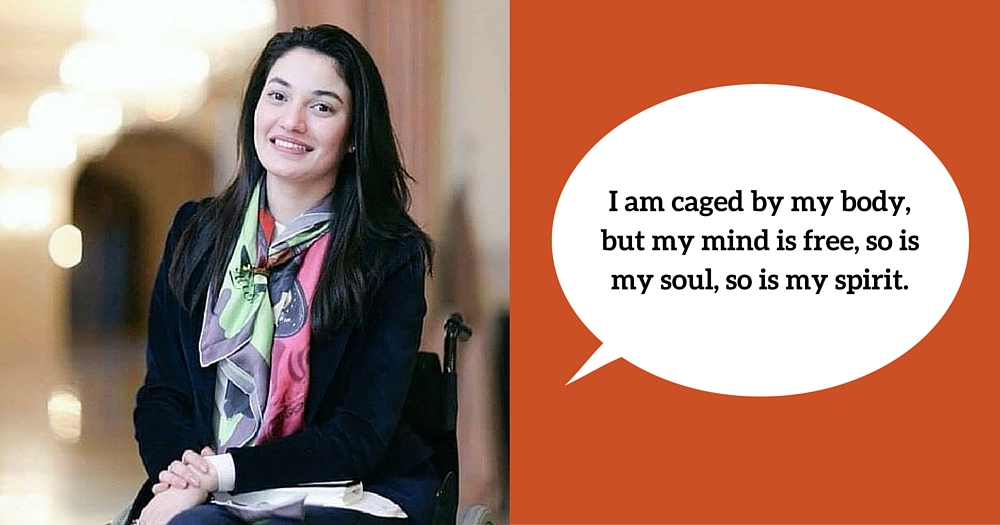 Here’s an inspiring video of artist Muniba Mazari, who experienced a horrific accident as a young adult. Discover how she transformed her life.

Pakistani artist Muniba Mazari was travelling from Baluchistan to her hometown, when her car driver fell asleep. Misfortune struck. The car fell into a ditch. This brave artist received multiple injuries. Three vertebrae of her backbone was completely crushed. And this was just one of the major injuries that she received. After not getting admission in any of the nearby hospitals in and around that area, she finally got admitted to a hospital in Karachi.

An artist was born out of adversity and struggle.

She crossed those painful days in the hospital with much difficulty and struggle. Muniba Mazari almost gave up on life. Later she realized that there was no point whining. She began to paint. Thus her painting journey began. An artist was born. “That’s how I added colours in my colourless life”, she said. Art kept her alive. She gradually began a professional career in content writing. And that gave her financial stability.

There was an advertisement campaign she saw, where a boy suffering from polio was sympathized about by his own father. That advertisement struck a chord deep down in her heart. She felt that this boy with disabilities was portrayed in such a wrong light by the media. And her mission was to change that perception. She believed that a disabled person or an individual bound to a wheel chair can still face the world head on.

Today she’s Pakistan’s first wheelchair bound model and brand ambassador of ‘Body Shop’ Pakistan. She’s one of the few wheelchair bound artists in the world.  Muniba Mazari is the perfect icon for all those individuals who are disabled and challenged in some way or the other. She’s proven that nothing can stop her, despite her disabilities.

She rightly says “I am caged by my body, but my mind is free, so is my soul, so is my spirit.” Enjoy her inspiring video.

Following A New Rhythm Of Her Own: Meet Pakistani Dancer And Actress, Suhaee Abro

3 Simple Stories That Taught Me Some Great Parenting Lessons