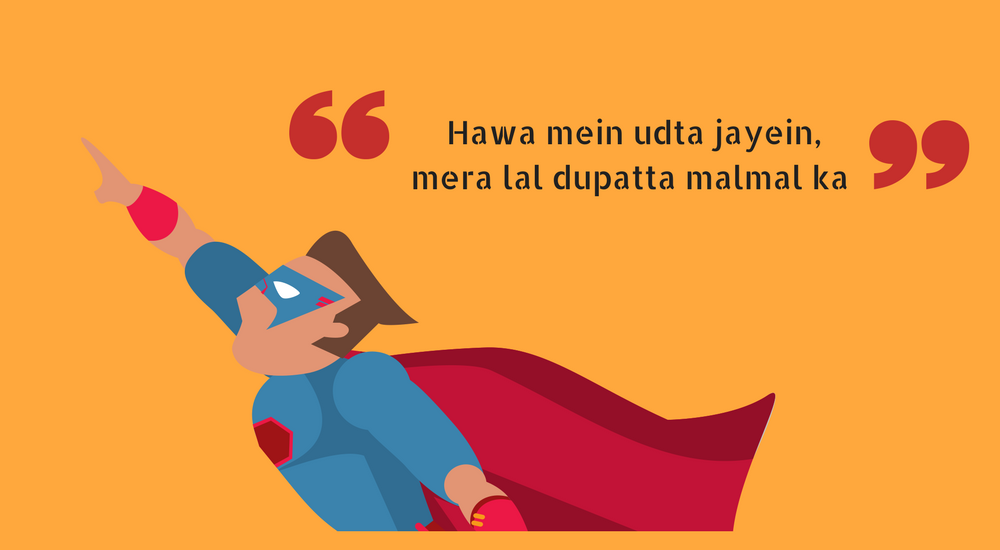 Want To Know Why I Hate The Dupatta?

“Is there some Vedic Age science behind why breasts should be covered with a dupatta?” A hilarious take on one of the oldest and most celebrated piece of Indian clothing.

If there is anything that I hate more than ill-fitting underwear or sleeves with sequins wounding armpits, or the zips in the back poking your skin till it forms a scar, it is the dupatta. This long piece of cloth with no apparent purpose other than to create balancing problems while choking me has become the bane of my existence.

When I was younger, I loved playing with my mother’s heavy dupattas. Double-sided borders and sequins and little somethings hanging on corners, they looked like the perfect accessories. Since I was raised in a household where women covered their heads in front of elders out of ‘respect’, the thought had invaded my mind.

However, when I got married, I discovered a whole new devilish side to this piece of ‘clothing.’ With no expertise in handling a 2-metre cloth, heavily embroidered and tasseled at ends, I failed miserably. The dupatta hated to be on my head unless stuck on with a million bobby pins, from which it groaned and threatened to rip itself into pieces, making my boutique-waali aunty cry in horror saying that I had destroyed a piece of art.

I began to hate carrying a dupatta; it would fall, disgracing me and would keep me preoccupied with having to handle it all the time. Since ‘respect’ is considered to be a female responsibility, men didn’t carry anything on their heads. When I rebelled and refused to carry it, I was reproached and I must confess, it did feel odd not to carry a dupatta, even if I felt uncomfortable with the wretched thing on me, all stuffy round my neck and shoulders.

It also refused to sit on my shoulders, as it was so heavy that it toppled to the ground unless held with safety pins, rendering it useless if I spotted an elder of the family and had to cover my head. I could not fold it to a tiny strip and hold it on my chin as the resultant strip would be so wide, it interfered in my head movement.

I learned to use plain, non-sequined ones, the cotton ones, in which it was easier to breathe. The kind that my mother used as dusting rags. They stayed on the head and could be easily tucked in underneath the chin. However, I was encouraged to bring the middle of the dupatta down so it covered my boobs, and hide, if there was any, cleavage. Which, of course, was useless as the dupatta didn’t hide the fact that I am a woman with a heavy bust.

And, while I tried to delude the world into thinking that I had no boobs, I wondered why? Was this to protect my modesty and thus protect me from any future attacks by molesters, since we all know that women who cover themselves from head to toe are not at all molested, in their house or outside (sarcasm intended for slow learners)? So, this must mean that a woman’s breasts are responsible for such acts, apart from chowmein and mobile phones, so that must mean that women with flat chests, or prepubescent girls, or even boys are safe from molestation because they have no breasts.

And, if the dupatta does protect my modesty, how does it accomplish such a feat? Because in all these years, no amount of my staring back at lechers, or rebuking at them, or even threats of a police complaint could do it. Does it create an iron cast shield that somehow deflects the vision of the molester to patrolling police PCR vans? Or is it electrified to dissuade the molesters, which is somehow not effective on the female wearing it?

Though it sounds far-fetched, I’m sure there must be a sanskaari Vedic-age science behind why covering of breasts and head with dupatta is important. But if I must be frank, carrying a dupatta is quite a a dangerous task. I remember watching actresses on TV were riding pillions; I worried myself sick as their dupattas bellowed in air, threatening to entangle in the blades of wheel and choke the heroine as she fell while the actor drove on lip-syncing to some song as he dragged her body with her dupatta.

Then there were days when I would hear some news when a girl’s hands were tied with her own dupatta and raped. But, that’s not possible, since we already established that women with the dupatta protecting their modesty do not get raped.

Of late, the only purpose I’ve seen of dupatta is in styling of ethnic wear, or to cover your face in extreme heat to prevent tanning, or covering your shoulders in cold, or wiping your hands when you can’t find a tissue, or fanning yourself when there is no electricity, or when you have to cut and sew a shrug out of it and like I mentioned before, using it as a dusting rag when it’s all worn and torn. Ah, I was wrong, there still are a million uses!

Don’t get me wrong, I am not condemning anyone for using a dupatta, whether they are doing it for religious reasons or styling or just because they feel incomplete without it, because I felt the same because of my upbringing, before I felt like ripping the whole thing to shards and burning it while I danced around the pyre dupatta-less in a defying, nonetheless crazy act.

Because, the dupatta has nothing that it would complete us women with. It’s not covering anything that another piece of clothing is not. Maybe it did a long while ago, but certainly not now. It has become a vestigial cloth that we keep on styling and associating with respect and modesty.

To me, modesty and respect are more than just what you wear more out of obligation than choice. They are not some fragrances oozing out of your clothes. So, I can only hope that a day will come when people will stop looking for a dupatta on me or call me ‘besharam’ if I chose not to carry one. If not, one can always use the dupatta to hang from the fan. Oh, another use!

Why Are Men So Afraid Of Breasts That The TN Govt Wants Us To Cloak Them With Dupattas?

Wearing A Dupatta Over My Head Doesn’t Make Me A Bad Feminist, In Fact, It Empowers Me!