Girls and women need to read the news to stay informed and use it for their careers as they step out into the world. 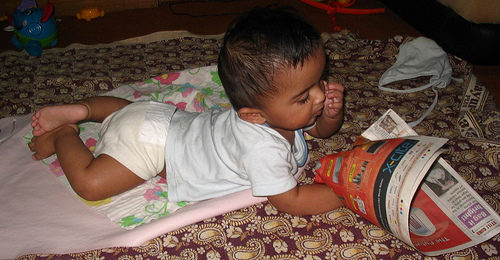 As a part of my professional responsibilities I have conducted several job interviews over the past few years ranging from the positions of  interns who are keen on taking up projects within the organization to candidates who have applied for senior job roles (technology / business). Usually when I start an interview, I spend the initial few minutes in greetings, pleasantries and introductions, which is followed by a few questions to make the candidate comfortable. One popular question which I ask (and I know a lot of the interview panelists ask too) is about one’s reading habits.

A typical conversation goes as below:

Candidate:  “Yes” (I’m yet to come across any one who said that they did not like to read during an interview! Not possible by the law of averages right? Anyways!)

Candidate : “Books.. Magazines.. And the newspaper”

Me: “So what was the latest news you read in the newspaper?”

Candidate Response if its a boy/man (in a majority of the cases) : Very specific news update (usually with strong supporting data) on politics, economics, current breaking news of the state, India or across the globe or sports.

Candidate Response if its a girl/woman (in very many cases) : Stumbles…looks vague…laughs….

NOTE: I don’t intend to generalize or draw any conclusions here. I am only stating facts based on my personal experience and observations.

I wonder why is it that girls/women don’t really know what’s in the news? Or do they just not feel comfortable speaking up?

As I try to find answers, I observed that in many an Indian household, the first thing which the boys/men (read as grandfather, father, father-in-law, husband or son) do as soon as they open their eyes is to get clued and glued into the news  – be it through the print paper, radio, TV, Twitter, Facebook, news feeds or whatever! But that’s NOT the first thing which girls/women (read as grandmother, mother, mother-in-law, wife or daughter) would typically do when they wake up. In fact, many girls/women don’t even know whats in the news till much later in the day. And many don’t even know what the breaking news was a day or two ago! (And I am as guilty as charged here because on some days as a working mother, I just don’t have the time to know what’s in the news!) As I pondered on the BIG WHY, I realized that it probably has to do with the social conditioning of what a girl/women’s role is at home, and the expectations of the people around her (read as family / society). And this lack of timely knowledge on the news was probably acceptable as long as girls/women were confined to the four walls of the house. But with women of today entering the workforce as competent professionals speaking with customers across the globe, taking on challenging work responsibilities and attempting to break the ‘glass ceiling’ , I think it is VERY VERY IMPORTANT to be aware and know whats in the news.

All in all, it does only GOOD to know what’s in the news!

As I conclude, I leave you with a question:

Girl, do you know what’s in the news?

If yes, can you speak about it for 3 minutes?

If No, can you do something about it from today?

Do take the time to KNOW what’s in the NEWS –  especially if you are a girl/woman.. Whatever be your source / channel, make sure you set aside some time everyday to get updated on the current news! In the long run, it will only be beneficial for you!