Let Me Count The Ways

Why do women get praised for multiple roles as though they were only a sum of all these compartments and not a whole person? 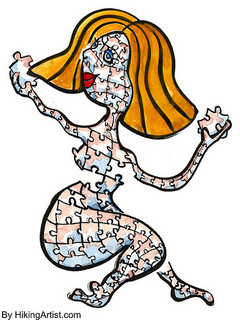 If my rant made no sense, consider this: social rhetoric, media and popular culture frequently collaborate to reinforce the image of a (usually successful) woman playing many roles. “Wife! Mother! Daughter! Activist!”, they’ll exclaim, carving womanhood down to individual parts and a woman’s identity to an assortment of such roles. Further, this is meant to be an appreciative assessment of The One Who Does All This and More, when relational descriptors are simply reductionist labels. Because if you move in closer, you begin to see the fine print about how a wife/daughter/mother/daughter-in-law is defined, when in reality, few or none of those crisply-edited specifications could apply to individual women. Now here comes the confusing bit: But we do manage a whole array of tasks in different capacities, don’t we? Sure we do. Many of us. And granted, a majority of women still undertake the daily grunt work of chores, picking up after their families, running errands, and it is true that additional role expectations increase stress. But would it kill anyone to just see us as PEOPLE instead of peeling apart each act and compartmentalizing it in giant containers labeled with every possible relationship a woman is ever known by?

I don’t even need to highlight how men never get told, “Oh my! Son! Husband! Father! Businessman! Secret smoker on the pot! You do so much!” Every human being regardless of gender enjoys appreciation, and women frequently shoulder society’s thankless, less respected tasks, which makes recognition a wonderful thing, but as a person, please. As a human being who belong to herself: her body, her brain, her volition; not an automaton who goes about life fulfilling her relational tags, no matter how valuable, rewarding and all-consuming they are.

As a woman, I would like to choose my war paint. Don’t plaster me with tags to the point where you can’t really see me. The loss will be yours. And as a civilization, we lose something valuable each time we can’t see the uniqueness in an individual. And heaven forbid the foisting of those definitions becomes a self-fulfilling prophesy and we begin to see ourselves as successful solely within their boundaries, or accomplished because social commentary lauds us in these specific ways. To those fracturing your identity—intentionally or otherwise—say slowly and clearly, “I may do many things, but I am wholly me.” Let’s keep pigeon-holes for the birds, shall we?