Check out our interesting reads this week - politics, personal, and some fun! 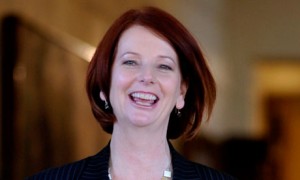 Check out our interesting reads this week – politics, personal, and some fun!

Did you see Australian Prime Minister Julia Gillard accuse Opposition Leader Tony Abbott of misogyny and sexism? The video has gone viral, and even inspired Maquarie Dictionary in Australia to update its definition of the world ‘misogyny’.

Mitt Romney’s remark about the “binders full of women” he consulted while forming his government in Massachusetts inspired this meme! But in all seriousness, Erin Gloria Ryan explains how Romney’s ‘binders’ didn’t actually lead to many women being in government while he was Governor.

LZ Granderson writes about his daily conundrum at his local grocery store – should he reveal his sexual orientation to the cashier while buying flowers or not? People assume that flowers are meant for women.

We’ve seen the statistics for years – in relationships, men cheat more than women. New studies, however, are closing the gender gap.

I read many romances, but as a feminist, find a lot to object to in most of them. Jackie C. Horne lists some things that she gets out of reading romances as a feminist.

And for some fun reading, here’s the latest edition of Cosmocking.