Right to Food: The Indian government is generous enough to distribute subsidized food to the poor, but clever enough to do it cheaply. 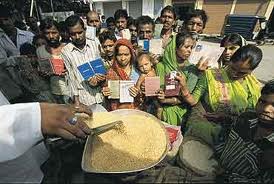 I thought of our basic rights and got reminded of our human right: Right to Food. In Article 25, the Universal Declaration states that “Everyone has the right to a standard of living adequate for the health and well-being of himself and of his family, including food, clothing, housing and medical care and necessary social services, and the right to security in the event of unemployment, sickness, disability, widowhood, old age or other lack of livelihood in circumstances beyond his control.” (FAO, United Nations).

The Indian government is generous enough to distribute subsidized food to the poor, but clever enough to do it cheaply. The ration given to people below poverty line (BPL) mostly includes carbohydrates with rice and wheat. In India, we only have a Right to Food campaign. Why? As far as I’m concerned, Indian men, women and children are just as human as everyone else on the planet, and deserve not cruelty but their basic human rights.

A poor Indian woman manages home with rice and sometimes lentils to feed her family, and knows it in her heart that the food doesn’t help the malnourished condition of either her children, or husband, or her own. A pregnant wife delivers a weak baby because at the time of feeding, the government fell short of protein to deliver in the subsidized rations. This chain of dependence reveals a generation of under nourished/malnourished families, which ultimately stay on the same level – the lowest level. It affects key means for a decent life: education, work and shelter. Ultimately, when poor people are asked for their occupations, some would say scavenging and others would say body picking.

These are people who work at the lowest level of the hierarchy whose generations of poor health has forced them into cleaning the gutter for everybody, and picking dead bodies on the railway tracks to submit for autopsy. These jobs are done by men, women and children who manage to survive amidst the plague of poverty; plenty others die in this process of deceit and profit. What I’ve shown you is how lack of a basic right to food can severely alter the balance of a functional society (ours has not been functional for generations). Not a newsflash. We pride ourselves with India shining and stable GDP growth rate, but where are the numbers and nutrients when it comes to the Public Distribution System (PDS)? The only star of the government is the category of pregnant women and children who are fed midday meals and are involved in the Anganwadi programme. But those are not accessible to everyone, are not always carried out efficiently, and the essential nutrients such as protein and calcium are missing in the mid day meals.

The Indian government should take the first step to give them the basic rights by making sure that the ration includes not only carbohydrates but also covers proteins, minerals, vitamins and calcium. It would be good to have an efficient audit in place to ensure that the subsidized rations are consistently checked for these nutrients. If we get even close to this goal, our community will be able to see people who are healthier and more productive, and if anything, this would only help in nation building with smart brains and tough bodies.