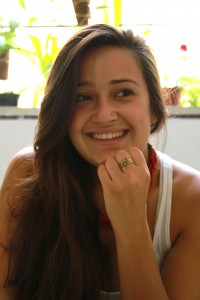 Juliana Britto Schwartz is a Latin American and Latino Studies major, who adds that by night, she is a Latina feminist blogger and activist. She writes at Juliana Britto about reproductive health justice, race, immigration and women’s rights in the U.S. and Latin America, with a focus on Brazil.

I became interested in feminism in high school. I was always involved in social justice, and was somewhat well-known, almost infamous for it. At some point, I felt like I started to develop a bit of a reputation as that annoying girl who is always trying to be PC, and the more that I ran into this, the more I realized how much my gender had to do with it. People listened much more to the young men who were doing this work than they listened to me. That’s when I started to begin working to debunk the traditional stereotype about feminists as obnoxious man-haters. And for the record, there is a feminist club at my old high school now.

What according to you, are the major challenges/issues that impact women in your country today?

As someone with a foot in two worlds (my mother is Brazilian, my father is U.S. American) I think I have a somewhat global view of feminism. I’ve read just as much about the sexualization of the mulata in Brazil as I have about the glass ceiling in the States. However, I think that within both those worlds, reproductive health access and justice are THE most pressing issues. Living in Brazil, I heard as many discussions about access to safe abortions as I have in the U.S., and I think the right to have control over our bodies is the most basic, yet so disputed.

I write as a way of organizing and collecting my thoughts and opinions in one place. Over time, my blog has developed, evolved a bit and I often use it as a tool for activism, spreading the word on issues that I find important. I also love the networking opportunities that blogging can drop in your lap. I’m excited to collaborate more as I continue blogging.

Every once in a while you get an obnoxious comment. I do my best to differentiate between someone who is just trying to provoke me, and someone who wants to have a legitimate dialogue. I respond to the latter, but not the former.

Let’s see. I was particularly honoured to conduct this interview with Dxonne, a fulni-ô woman in the interior of Brazil, and I was fascinated when researching for this post about the Private Immigrant Detention Industry in the U.S. I think one of my most popular posts has been my Manifesto to That Guy on the Street.

Right now, I’m loving Virginia Sole-Smith’s blog Beauty Schooled, looking at the beauty industry in the U.S. In Portuguese, I like reading about feminism in Brazil over at Blogueiras Feministas, as well as keeping up on Brazilian abortion politics at Aborto em Debate.