Unbreakable is the inspiring story of an amazing woman. Mary Kom’s autobiography is gripping and full of action, much like her punches. 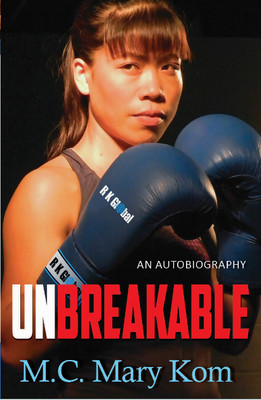 Unbreakable is the inspiring story of an amazing woman. Mary Kom’s autobiography is gripping and full of action, much like her punches.

Unbreakable by M.C. Mary Kom could have been the story of any woman living in rural India. For a majority of Indian women, life is a struggle – a struggle to follow their dreams, a struggle to assert their rights, a struggle to make ends meet. What sets her apart is the sheer grit with which she faces every hurdle, and her determination to not let her struggle go in vain.

Mangte Chungneijang Mary Kom is a woman who has worked really hard to distinguish herself as an achiever. A five time World Boxing Champion, she is the only woman boxer to have won a medal in each one of the six world championships. At the London Olympics 2012, the first time women’s boxing was introduced as an Olympic sport, she won a bronze.

Unbreakable traces Mary Kom’s life from the time she was born, to her sojourn at the 2012 London Olympics. Born in a small village in Manipur, in a family primarily dependent on farming, her attempts to study despite the house-work and farm-work is a story many young Indian girls will identify with. She describes how she discovered her passion for boxing, her initial days of training, even going into details of the politics among sports bodies, both at state and national level. Anecdotes about each of her five World Champion medals are tightly woven with incidents in her personal life – her shift to Delhi, falling in love, marriage, the birth of her children, loss of a parent. The book highlights the maternal side of her as well; her agony at having to part from her children during the long training camps, spending her breaks setting the house in order; making her come across as no different than most other working women of her age. The 12 pages of photographs from her personal and professional life make you feel as if you have known her all your life.

What makes the book a winner is the short and crisp narration. The 140 pages book is clear, to-the-point and full of action, much like her punches. Autobiographies, if not handled well, tend to turn into a rant, but there is not a single dull minute in her narrative. By the end of the book, you feel like giving a standing ovation to this woman who is a role model for millions of women who do not have the means, yet have the dreams and the will to strive for them.

If you’re planning to purchase Unbreakable by Mary Kom, do consider buying it through these Women’s Web affiliate links at Flipkart or Infibeam.