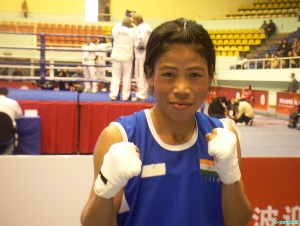 Synonymous with boxing in India (and not just women’s boxing) is star sportsperson and superachiever, Mary Kom.

Five times World Boxing Champion, Mary Kom is among India’s brightest hopes for the London 2012 Olympics. In fact, it is partly her success and example that has led to women’s boxing being included in the Olympics at all – something that had been denied for a long time.

Kom’s achievements are even more special when one considers the tough challenges she has had to beat –  she hails from a very modest family background, and her rise is also a reminder that given encouragement and resources, sport can be an enabler for many more young women and men in India to rise above their circumstances.

– Because she is keen to give back to her state, Manipur, a troubled part of India