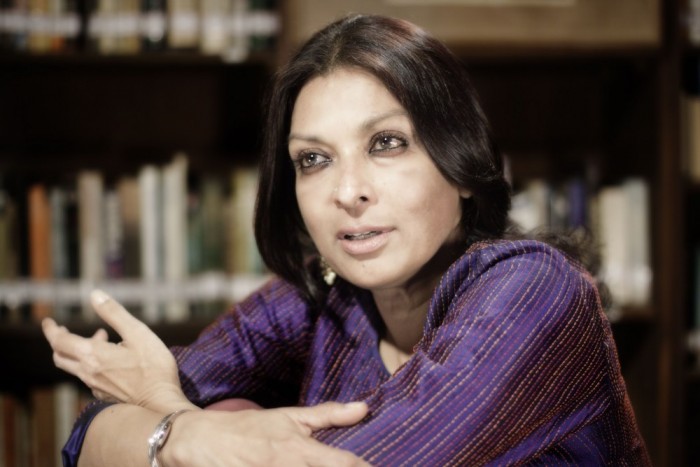 Besides being one of the greatest exponents of Kuchipudi and Bharatanatyam in our times, Mallika is a fearless writer on women’s empowerment and other burning socio-cultural issues, a publisher of illustrated books on India’s arts, culture and literature (Mapin Publishing), an accomplished actress in theatre, an activist, a politician with a difference, and a social entrepreneur.

Her dancing genius straddles tradition and modernity with complete élan. “I love enacting the most classically strict Bharatanatyam and also using a contemporary view or eye in redefining it, rearranging it, re-juxtaposing it,” explains Mallika. This helps her tackle contemporary issues with the vocabulary of classical dance.

In 1989, Mallika conceived and created the first of her hard-hitting solo theatrical works, Shakti: The Power of Women. Since then she has acted, directed, produced and scripted numerous stage productions, which have been instrumental in highlighting crucial social issues and advocating change.

I ask her about her role in changing the concept of dance-drama in modern India. “Perhaps my real contribution to the continual legacy of Indian arts is in breaking down the walls that developed over the centuries within various artistic forms, which kept dancing divorced from theatre, from music, and from story telling. In the very first piece I created, Shakti: The Power of Women, I managed to break down these barriers,” she elaborates, while adding, “Depending on the subject within the piece, I danced, using different styles of dancing, sang, used masks, told stories, used comedy, etc. It was the total theatre that is spoken about in our shastras.”

I ask her about the inspiration behind her becoming a modern institution in classical dance, and also in choreography. “My primary inspiration in dance has always been amma, both for her pristine but strong dancing style and also as much for her content. But besides my mother Mrinalini Sarabhai, many other things inspire me. They can range from a piece of music, a news item, a story, a visual, even something I overhear,” explains the diva.

Mallika shot to global fame after essaying the role of Draupadi (possibly the original feminist character in Indian mythology) in Peter Brook’s nine-hour long play titled ‘The Mahabharata’. She rightly describes herself as a “communicator who is passionate about a just and humane world, and who uses all her communication skills and passion to push ideas into people who don’t normally let themselves question their own values and prejudices.” The latest of her aesthetic endeavours is   performances with her group exploring various facets of displacement, which would be showcased through the 38th Vikram Sarabhai International Arts Festival 2013-14, to be held in New Delhi during 11th-13th March this year.

Mallika, the global citizen, is an alumni of IIM Ahmedabad and has a doctorate from the Gujarat University in Organisational Behaviour. She did her MBA at a very young age of 20, and completed her Phd. two years later, in 1976.

She chose to channelise her expertise in management to manage the Darpana Academy of Performing Arts in Ahmedabad along with her mother, which she has been engaged with for the last three decades. From a small dance academy that was founded in 1949 by Mrinalini Sarabhai and her late husband—the eminent scientist late Vikram Sarabhai — Darpana’s evolution as an internationally renowned institution of performing arts is a reflection of Mallika’s aesthetic vision as well as her management skills.

Mallika has also been a constant source of inspiration for millions of women and men, not only through her potent and socially relevant art, and her equally powerful activism, but also through her candid opinions across prestigious newspaper columns.

“I know a lot of people read what I write because through my writings they get in touch with different perspectives and reality and also connect with the real issues; which expose the PR exercise of the Modi government,” says the power woman, while adding, “I love writing and am doing it more and more, which also includes scripts as well and long essays.”

Mallika is anguished by the emergence of fundamentalism from various quarters of Indian society. Restoring the pluralistic legacy of India is one of the cornerstones of her arts and activism. Her courage and conscience made her take up cudgels against Narendra Modi’s Gujarat government during the height of the Gujarat carnage.

A voice against violence

Mallika is distressed by the growing violence against women and prevalent misogyny in Indian society, and has some radical and comprehensive ideas to counter them.

She thinks stringent and speedy punishment for rapists should be supplemented with their public shaming. “The posters of these depraved creatures should go up in localities saying ‘I am a rapist,’ and this should be done along with meting out rigorous punishment to them,” argues Mallika.

She also suggests that all people involved in honour killings and acid attacks should not only go to jail for life but also must be made to do something which is perceived as demeaning in our society, like say cleaning public loos for five years.

At the same time, she believes that women and girls themselves must be fully strengthened to teach lessons to molesters, and would be rapists, and for that Mallika, a trained martial artist herself, advocates training in martial arts for every woman and girl in India.

“Besides, I think there should be training in gender sensitivity for all public officials which should include police personnel, politicians, judges, lawyers, journalists, etc. across the country to facilitate the process of justice for women facing violence of any kind,” she adds.

“We also need to change the mindset of girls since their childhood, so that they not only achieve social and economic empowerment, but also feel empowered in every way,” explains one of the strongest supporters of women power in India.

Mallika’s activism is not solely directed towards women’s empowerment; she also feels very deeply about  underprivileged men. She laments the lack of willingness among our political class to bring about enduring changes. “I think it is not a question of efficiency, it is a question of intention. Not even the most inefficient ones would have made such little impact on development after 65 years, if they really wanted change,” concludes Mallika.