The love-hate relationship between Karna and Draupadi, his hatred for Shakuni, his loyalty to Duryodhana are all seen through the eyes of his wife, Uruvi. 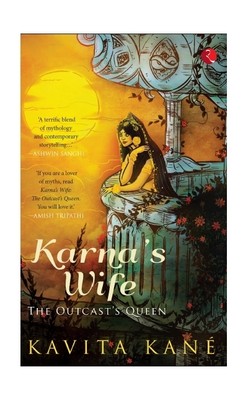 In Karna’s Wife – The Outcast’s Queen, by Kavita Kane, we meet a strong woman, his wife – Uruvi, and see this complex character through her eyes.

Karna’s wife – The Outcast’s Queen, is a retelling of the epic from the perspective of  Karna’s second wife  – Uruvi, the Princess of Pukeya, a kshatriya princess married to a sutaputra. The narrative starts at Uruvi’s swayamvar; Karna is already a part of the dushta chathushtayam (the four examples of evil men),  the others being Shakuni, Duryodhana and Dushasana. He has already faced public ridicule twice – once at the archery tournament in Hastinapur and then again at Draupadi’s swayamvar, for being a charioteer’s son and born in a low caste.

The Pandavas have faced exile once and have now returned to claim their half of the kingdom. From here onwards, the story unfolds through the eyes of Uruvi, who chooses Karna over Arjuna, her childhood friend, at a scandalous swayamvar.

The tale explores, through Uruvi, the multiple facets of Karna, the father, the son, the husband, the friend, the king; the epitome of moral righteousness, who made all the wrong decisions, owing to his loyalty to Duryodhana, to whom he is indebted for life. Duryodhana accepts him and gives him his due recognition, when the entire world chides him. The passage where Karna explains to Uruvi, why Duryodhana is what he is, leaves you wondering whether a person can really be classified as good or bad; “Duryodhana was doomed before he was even born…he was born a child of hatred and lives to hate...” The love-hate relationship between Karna and Draupadi, his devotion and respect for Krishna, his hatred for Shakuni, his loyalty to Duryodhana are explained as never before.

Uruvi, passionately in love with Karna, and with a wit and intelligence to match the stalwarts of the Kuru kingdom, has to reconcile herself to being the “outcast’s queen”. But after the Rajasuya yagna, she is faced with a new challenge – torn between her love for Karna and her own sense of morality, she is unable to forgive Karna for his transgression after the game of dice in ordering  the disrobing of Draupadi and calling her a whore, even when everyone else, including Draupadi,  has forgiven him. Filled with a sense of foreboding, she makes a last attempt to change Karna’s loyalties before resigning herself to face the worst.

Karna’s Wife is a must-read for anyone who likes mythology, and Uruvi’s outspoken and ’ahead of her times’ character is one with which most Indian women today will easily identify.

If you’re planning to purchase Kavita Kane’s Karna’s Wife, do consider buying it through this Women’s Web affiliate link at Flipkart. We get a small share of the proceeds – every little bit will help us continue bringing you the content you like!