The Indian Mom’s Guide To Dealing With The Terrible Twos

Many Indian moms are driven crazy by their tantrum-throwing and stubborn two-year olds! Learn all about parenting toddlers and teaching kids discipline. 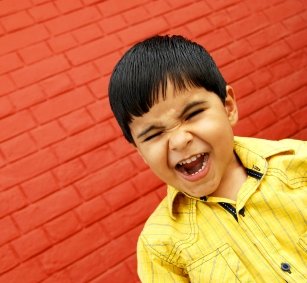 Many Indian moms are driven crazy by their tantrum-throwing and stubborn two-year olds! Learn all about parenting toddlers and teaching kids discipline.

The diapers are done with, potty training is progressing well. The first teething pains are over. He’s walking now and talking a bit in that oh-so-sweet gurgle. You are still the world to him. His wide, loving eyes adore you, he wants to be with you all the time, heck, he wants to BE you. What could possibly go wrong at this time? And yet, so much does.

As many Indian moms discover, this is the time when your little angel turns into a devil at a moment’s notice. When temper tantrums in toddlers are oh-so-common. One minute there’s all sweetness and light, the next there’s dark clouds and thunder. Life can be very, very trying for moms, dads and other caregivers.

My first encounter with the terrible twos

After a particularly nasty vaccination date, I decided to treat my Ashok to a nice new toy. I took him to a swanky new department store that had just opened up on Linking Road (Bandra). What a huge mistake! Right up front on a display stand, was my nemesis – a motorised motorcycle, short enough for a 2-year old, with full lights, true-bike sound, and real battery-powered motion. He takes one look and is hooked. He holds on to the bars and asks for it, politely. I grin but shake my head, no. He goes, “Momma, want. This.” I get more emphatic, “No”. He doubles his emphasis. “WANT. I.” And after a short hesitation, auto-corrects it to “I WANT!!!” repeated loudly a few times. I am embarrassed, but stay firm. I randomly pick up a couple of cars from the shelf behind me, but how can they compete with this big flashy monster?

He clambers on to the bike, goes “BBRRRRRRRRRMMMMMM” and presses the horn and switches on the lights. How the heck does he know these things? By now the salesman is hovering, all eyes and ears.  But. I stick to my corner. There is no way I will buy him that toy. It is not organic, it is not creative, he will sit on it and ride, eat up batteries, and learn nothing. Little bikerider whines, then sniffles, then bawls outright in the middle of the store. Surrounded by shelves stocked with kitchenware, salwar-kurtas and imported candy, the sound is deafening.

Little bikerider whines, then sniffles, then bawls outright in the middle of the store. Surrounded by shelves stocked with kitchenware, salwar-kurtas and imported candy, the sound is deafening.

By now everyone from the manager to the popcorn-popper outside is in on the deal being negotiated on the shop floor, and most of them have placed their bets on the kid. The manager offers a 5% inaugural discount. Nice salesgirl offers a lollypop (to Ashok). Old saleslady offers me advice. But if Ashok is not listening, then I too am Ashok’s mom and I am not listening, either. Suddenly I have had enough of this whole business. I grapple with him to get him off the bike (no easy task), swing him up on my hip (his usual perch) and stalk out of the store.

Much to learn about parenting toddlers

My son goes to Tridha, the Waldorf School in Bombay. Their education is based on the philosophy of Rudolf Steiner and thus on a healthy respect for the child as an individual and a strong commitment to providing what the child needs at every stage of development; it is a great way to bring up kids and I try and follow their philosophy at home too.

The fact is that kids are just realising their own bodily independence around this time. Until then, they never perceived themselves as an entity separate from their mother, or from the environment. As this realisation dawns, they are able to say “I” while becoming fully conscious of what it implies. This is important to understand, because through this we can understand why suddenly, everything for the child becomes centred around “I” – I want, I do it, give to I, I, I!!! This is the constant clamour of a child around the age of 2 up until 3 or maybe 3 and a half.

The fact is that kids are just realising their own bodily independence around this time. Until then, they never perceived themselves as an entity separate from their mother, or from the environment.

So, he is gaining in independence and now wants to make his own choices and do his own thing. Great. Only, how much can he really do? Ashok wanted to do everything I was doing, including cooking and cleaning. So if I was making chappati, I’d plonk him down on the floor next to me with a bowl and atta, and let him mess around with it. He’d let me cook in peace, ploughing away at the atta happily. If the didi was dusting, he’d be happy following her around with a duster imitating her actions. At that stage, the doing is important, the final result really doesn’t matter. So make sure you give him stuff which he can “do” i.e. happily work on. Because when it comes to stuff he cannot do, he will get frustrated and that leads to anger…and so, more tantrums.

Ok, so maybe it becomes understandable (in hindsight), but how do you deal with it? Taking it calmly and smiling is the best way to deal with them at this stage. The best free advice I can offer is, don’t get angry!

When you’re tired, frustrated, exasperated and at your wit’s end — that’s the time you need to gather all your courage and your inner reserves of strength…and not shout. If you’re setting boundaries of behaviour, giving instructions or setting tasks, make sure you are understood – remember the listener is really just a child (yep, sometimes it is easy to forget this). And be consistent – don’t let the child get away with murder today just because you are in a good mood, and tomorrow pile on to him for a small mistake. He should know what behaviour pleases you so that he can repeat it (and believe me, his desire is to please you, even though it might not always seem so).

Be consistent – don’t let the child get away with murder today just because you are in a good mood, and tomorrow pile on to him for a small mistake.

Another very simple technique is to reward good behaviour. If he does something right, if he finishes his dinner without a fuss, puts away his crayons in the box, smile, give him a hug and kiss, or a small treat. He will be encouraged to repeat these actions and get the rewards he seeks. Bad behaviour needs correction, but not necessarily punishment; and it is very necessary to point out that only a certain action is bad, and not the child itself.

Time outs work at this stage, so use them. Keep a specific corner which is airy and cool, comfortable but secluded. It is a place he must go to, to think, to calm down, to reflect on his actions. It is a space for him to be quiet and where he cannot do anything else but sit (or lie down) – no talking, no playing allowed. It can be an effective and very calming way to stop tantrums, bouts of anger. Come a day when he will growl at you and go, “I’m not doing a time out! What will you do?” but that’s another story….