That Glorified Lover You See On Screen Is A Stalker!

Cinema is a strong medium of mass communication, it should be careful about the message it sends out to the people. Can a deep emotion like love be imposed upon someone?

So many times,  I have we seen in Hindi films that the hero stalks, manhandles a woman, in the name of love and even gets the ‘gal’ in the end!

This sounds so 18th century! An era when a woman and her opinion had no value, she didn’t have the right to choose her love and was married off to any suitor who displayed the best warfare heroics.

Stalking is a form of imposition of attention

Can a deep emotion like love be imposed upon someone? Stalking is a form of imposition of attention and love, which is often undesired. And if the love is still unrequited, then attack the woman with acid or physically manhandle her, which leaves her scared for life.

As such is the general mental conditioning of our society, we love to blame the woman for every time she is victimized! Be it stalking, acid attacks and the worst, rape!

The woman who suffers unfathomable pain, both mental and physical, is tainted with remarks on her dressing sense, odd working hours, friends and character.

We, women, face victim shaming, character assassination and are being blamed for the crime that someone else committed.

Cinema creators should be careful about the messages they send

Since cinema is a strong medium of mass communication, it should be careful about the message it sends out to the people. The early 90s saw every other film glorifying the act of stalking to the extent of  machismo and heroism!

And the lady love succumbing to his constant following and harassments and falling in love with him is the icing on the cake.

It’s heartening to see that today’s cinema and audience are much evolved and matured. Such cringe contents are not largely appreciated now. Stalking, be it physical or cyber, is a punishable offence, to the much relief of the victims of such wild obsessions who have to constantly look over their shoulders.

Stalking, harassing doesn’t beget love, it only robs the victim of her self-confidence, freedom and peace. Instead of victim shaming, we should stand by them to punish the perpetrators.

Register at Women's Web to get our weekly mailer and never miss out on our events, contests & best reads! Or - get a couple of really cool reads on your phone every day - click here to join our Telegram channel.
crimemoral policingsafetywomen in cinemawomen's safety 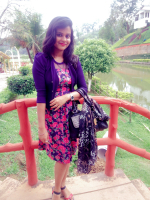 I hail from the mytic hills of the north-east..I am a product of a cosmopolitan upbringing and have always tried to imbibe the best of different cultures and traditions.I love to pen read more...