Growing up, I don’t remember a lot of love being showered, but a series of rules being preached — don’t talk too much or too loudly, don’t laugh out hard! My grandmother was strict!

Two weeks ago, my grandmother, my father’s mother, passed on. When I got the news, I was in a dentist’s chair and anaesthetized for a surgical procedure. I broke down instantly at the shock, even as I should have expected this as she hadn’t been keeping well for some time.

Anyway, the surgeon let me go to say goodbye to my grandmother who I, and then my younger brothers and cousin, lovingly called ‘Maaji’. The anaesthesia did not help with the pain I immediately felt in my gut.

Maaji died at 81. As long as she lived, she was the decision maker in our family. Everyone would seek her approval. She would monitor the groceries and meals in the house even till she turned very old. With not so much more the primary school education behind her, no one could mess with her.

Having her husband who served in the army for the first two decades of her married life and having lost her parents-in-law soon after she got married. She was single parenting five children long before we had a term for it. To make matters worse, she lived in a village where households from our caste were far in between, so there were not a lot of people to call your own.

Rural life in the 60s was not easy

Of course, rural life in the sixties and seventies was physically hard and economically challenging. She would stand her ground and fight if a neighbour tried to occupy our little plot of land. Partly out of her interest and partly from a need to support her family, she taught herself to sew and knit, bought a machine and did these jobs for money. To the best of my knowledge, that was the first time anyone in my extended family did anything entrepreneurial in their lives.

Maaji was a phenomenal woman — so full of life and wisdom. Deeply religious, but not ritualistic at all. She always spoke Hindi and not Haryanvi, I think in my entire clan, she was the first truly urban person. My father addressed her as ‘Mummy’, and not ‘Maa’, as they would usually do in the village. She loved music, mostly devotional, but would also love a beat anytime. She herself was the master dholak player!

Everyone who would meet her would instantly feel a boost up. And she was funny. Once on my dad’s fiftieth birthday, she was visiting us and as we were bringing out the cake on the eve of the birthday, she started laughing!

She told us she hadn’t even gone to the hospital by that time when my dad was actually born! And when she laughed, she really laughed, the kind of belly laugh which babies love.

Patriarchal foundations affect us all

She almost worshipped her husband, who occupied all of her life. In turn, my grandfather adored her, valued her, supported her. Theirs was truly a marriage of equals spread over 65 years. They made the cutest couple ever, always engaging in some banter, looking after each other, leading their lives together.

I am a hundred percent sure that my recently deceased grandmother didn’t think so much of herself, though. She valued her sons more than her daughters, she perhaps loved them equally, but that’s not the same as valuing them equally.

I know she cried when I was born. I was her first grandchild — firstborn of her eldest son — which as I write, I realize is not even correct. I do have a cousin, one year older than me, but that one didn’t count for her because she was born to a daughter. Maaji cried because a girl was born in the family.

Even though my parents didn’t want any more children, they were forced to have more because how can they just have a girl child! Who will continue the family? On the top of it, I wasn’t even fair complexioned, which somehow made the whole thing worse.

Affection is a luxury for the girl child

Growing up I don’t remember a lot of love being showered, but a series of rules being preached— don’t talk too much or too loudly, don’t laugh out hard, wear modest which meant traditional Indian clothes, sit on the floor if you were having your periods and on and on because that’s what good girls do.

There was even a time when I remember her saying that I was highly auspicious for our family. Surprised by this, I asked her why. She said because after my birth, there was no other girl born in our family.

I have two younger brothers and then my paternal uncle has one son, he was not required to have more as he hit gold the first time. Well, that must make a girl very lucky and is obviously great for that girl’s sense of self-worth.

Regardless, I would contend that she herself was a victim of the same gendered society that she was a staunch pillar of. When people in India die after having lived a long, full life, their death is celebrated almost like a wedding. But we didn’t do that for on her final send off.

When I asked my aunt why not, she told me that it’s because my grandfather wouldn’t be able to see a celebration on the death of his wife.

This confused me because I recalled that when my other grandfather died over 14 years ago, there was a big celebration while his wife was very much alive. She witnessed the whole village celebrating her dead husband’s life, while she grieved for her loss. Perhaps she — and everyone around her—  believed that her husband deserved to be celebrated!

While my relationship with my grandmother was never acrimonious, it took a turn for the better when I decided to marry. She was happy that even though I chose my partner myself and that he belonged to the other end of the country, at least he came from the same caste.

Even though by her standards I married very late in life (I was 29), she was thrilled. She blessed me, blessed my partner, and was a picture of joy, drumming, dancing, singing all through my engagement and wedding ceremonies, and ever since.

And to her credit, through the six plus years of me walking this planet having a single girl child, she didn’t bother me to have another one, so I could have a boy this time. She truly values my daughter more than she valued me or my cousins or even her own daughters. Does she value her over my nephew, I don’t know?

Through in the past decade, I realized how much love she was capable of giving, of course now that I was deemed deserving of it. As I became a mother, I realized how strong and big she was. I felt the warmth, appreciated her humour and wisdom, and leaned on her.

She was a woman of a certain age and time and was hardly ever working on her own, but as a stooge of the patriarchal society we all inhabit. Did I unnecessarily accord all this to her? I loved her always, but this bit of a complication may have come in the way of what could have been a much stronger bond.

I wonder how many relationships in our daily lives and families are sacrificed on this altar of societal judgements based on caste and gender and so forth, not allowing us to see the person for who they truly are. 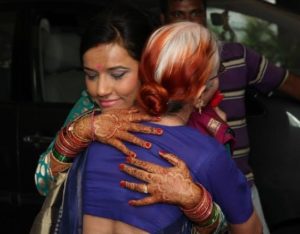 Author with her Grandmother.

Well, that explains why I was surprised that I am beside myself at her death. Perhaps I am not only grieving for the grandmother I had, but also for the time I lost in not having her fully.

After all, as a colleague observed when I was describing my grandmother, it feels like I am a lot like her. Well, that makes me very happy, knowing my jest for life comes from her! Now if only I can get to the wisdom part also please.

Rest in Peace, Maaji. May your gods look after you.