This Mother’s Day let’s celebrate mothers as humans, the ones who need their break, ones who hate multi-tasking, and the ones who should be stretching their feet without guilt.

In our country equating women and more specifically mothers with goddesses and putting them on a pedestal is considered the highest form of respect. But is it really so? Has anyone ever asked the womenfolk what this respect has cost them in life?

Preganews the pregnancy test kit brand from Mankind Pharma has been releasing advertisements or rather “social campaigns” with a message on important occasions like Mother’s Day and Women’s Day since a few years now. The aim of the campaigns has been to empower women, but sadly majority of these campaigns have been tone deaf and have done little to help the cause of women’s empowerment.

Refreshing to see the brand get a campaign right 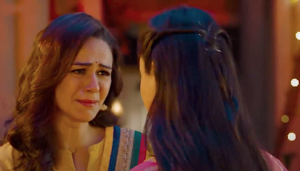 While the issue needs to spoken and made a part of conversations, but not in the insensitive way in which it was done. This honest opinion on this advertisement campaign points out on how horribly wrong the whole rendition was.

Sometime before this in 2020 Preganews released a campaign Sunday is Momday. This was the perfect example of tokenism.

The mother is slogging like crazy managing her home and work and what does her family do, decide to thank her by saying we will give you a free day on Sunday. If only everyone did their share of work every day. What is with this thinking of thanking the mom by taking over her work on Sunday, why are the house chores, the children’s homework the mother’s work alone, on all other days? This campaign instead of changing mindsets was only strengthening archaic mindsets.

As for their campaign on Women’s Day this year, the lesser spoken about, the better. 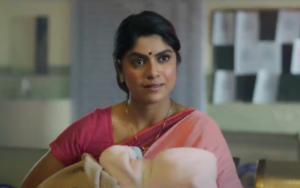 Women’s Day became the perfect occasion for them to further the stereotype of the modern woman being evil and further the idea that motherhood which completes a woman, a woman who differs with this opinion is obviously selfish.

A couple of days back as I was scrolling through my social media feed and came across the new campaign by Preganews and was prepared to see another piece of vile propaganda pushing the stereotype in the garb of empowerment, but this time I was surprised. The campaign has actually managed to walk the talk.

The ad starts with the marketing team of a company preparing for a new campaign. The boss is checking with her employees on their preparation before the meeting. She comes to one of the new members of her team, who is still not sure of the idea she wants to present. The boss calls home to check on her baby, and what she sees a wailing baby and the nanny telling her the baby’s formula feed is over. In the fraction of a second, we see a confident woman become the guilty mom berating herself for her carelessness.

The scene shifts to the conference room, where the ad campaign is being presented. We have the usual drawing of a supermom with several hands projected on the slide and this idea featuring the idea of super woman is garnering all praises.

This where the surprise comes when the not so sure young team member played by Apoorva Singh is the only one who disapproves of this idea of “Super Woman” “Perfect Maa” campaign. 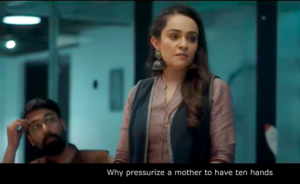 She raises the question why is it important for a mother to be perfect and a perfect multitasker at that, with 10 hands. A question which many mothers across the country must have asked themselves as they are bending backwards at the cost of their mental and physical well being to always be perfect.

A mother is human

Surprised as I was to see this advertisement, I immediately shared this on my Facebook feed. The first person to comment was my mother, who told me how much she loved this and how it took her years to understand that an imperfect mother is fine. A working woman in the 80’s and 90’s, I can totally get that life was a lot more difficult for her, the judgements harsher. Not that it was any easier for her counterparts who were home makers, “housewives” as they were called back then, and all they received for their hard work was thanklessness.

How much has the scenario improved over the years? The electronic appliances and technology may have made life easier but the perceptions and the pressure remains the same.

A few years back, a colleague’s son was prescribed glasses. I could see her berating herself and entirely holding herself responsible for the deterioration in her son’s eyesight. The son was a 9-year-old boy. The reason could have been anything for his poor eyesight, but his mom was sure this wouldn’t have happened if only she had more time to spend with him, monitor him and cook him better food.

If looked at reasonably, can a 9-year-old be monitored 24×7, how much can he be force fed, and should the child’s well being be the mother’s worry alone? But sadly, her family was quick to point fingers, and with the conditioning about mothers being perfect and always responsible the lady was immediately convinced that she had committed a sacrilegious sin. I am sure a lot of moms out there are going to resonate with this.

“Maa devi hothi hain.” (A mother is a goddess). If you are from India, this is one line you are sure to have heard, if not in Hindi, then in any of the other languages. This famous song featuring Rajnikanth from Manan, was a favourite of the 90’s kids. He is singing in praise of his mother, comparing her to all the female deities he can remember. I wonder if the mother would have been less praiseworthy, if she was more human and less ‘godly’.

I know this would anger many of you out there, and you would question me – what is wrong in celebrating a mother and honouring her? Why diss a culture which does that?

Celebrate a mother, no one is stopping you, but in the garb of celebration do not add to her pressures. Putting the mother on a pedestal and celebrating her sacrifices, has only led to unwarranted pressure on woman and bitterness about all that they were forced to sacrificed, just to fit into the mould of perfection.

The time has come for us mothers to accept the fact that we are humans. We chose motherhood because we wanted to experience the journey, and it is perfectly fine to live that journey by our rules; rules that make you happy. There is no need to sacrifice on your favourite food, sleep, dreams, ambitions and life plans to become a perfect mother. We might need to work around the plans, but not necessarily abandon them. Most importantly, it’s perfectly ok to seek help and delegate responsibility. Do not feel guilty about not being everywhere, coz humanely no one can be everywhere. It’s ok if you forget things, and it’s ok to not be a master chef.

Learn to ignore the judgemental barbs

A very important lesson I learnt from my mother is that a mom can’t be available for you 24×7, so it’s important that children are taught to be independent early on, not just for the mother’s convenience, but also for the child’s wellbeing.

“The poor child is home without you all day.”

“What is more important than being available for your child.”

These are some of the many gems that mothers sadly get to hear even in 2022. It is this harshness which makes us believe we can’t let go anywhere. One mistake, and we start berating ourselves, even though the mistake might have been negligible.

It’s time we learn to let things be; we cannot lease the whole world all the time, then why try. The children are happy and accepting of their mothers, just as they are: imperfect and human. So, let’s set them realistic goals and examples to follow. This Mother’s Day let’s celebrate mothers as humans, the ones who need their break, ones who hate multi-tasking, and the ones who should be stretching their feet without guilt. Perfection is a perception, imperfection is real.