We asked the women among our readers in an Instagram post for sexist questions asked at job interviews, and this is what they said.

We asked the women among our readers in an Instagram post for sexist questions asked at job interviews, and this is what they said.

Sexist questions are regularly directed towards women while appearing for an interview. These may be about their life choices or status, or about their families. In several interviews women also tend to receive vague feedbacks about their appearance, or sexist remarks on their communication style.

This disparity on how men and women are addressed in interviews clearly shows how our culture views women at workplaces – not as equal human beings, and not as professionals.

What is with the double standards? Along with sexist questions and comments, women are also considered ‘arrogant’ when they express what they expect from the job, or ask for a higher pay package.

The most ironic part is that women are urged to follow their goals in the name of ‘women’s empowerment’, yet time and again they are reminded by their male counterparts that some occupations aren’t suitable for women.

Here’s a list of 21 actual questions that were asked of women – we asked our readers for sexist questions asked at job interviews, and this is what they had to say.

1) Being constantly asked about marriage plans

2) Having to deal with double standard comments

6) Being told women are less hard-working than men

11) Stereotyping women and reducing them to a mere housewife

12) Moral policing women for being ‘aggressive’ or ‘competitive’

13) Passing comments on women’s looks and objectifying them

14) Penalising and rejecting them for just being a woman 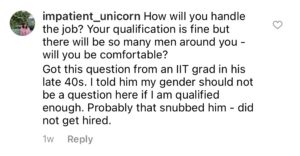 16) Being judged and questioned about husband’s profession

20) Being constantly asked about childcare plans

21) Being considered a ‘maternity risk’