Women in the entertainment industry are expected to 'look young forever', and often shamed by the same fans for eventually 'ageing', as it happened with Konkona Sensharma on an Insta post.

Women in the entertainment industry are expected to ‘look young forever’, and often shamed by the same fans for eventually ‘ageing’, as it happened with Konkona Sensharma on an Insta post.

Newsflash! Everyone ages, and no one has any magic potion to be ageless. So why am I talking about this now?

Actor Konkona Sensharma was shamed for ageing by her fans on her recent Instagram post. She posted a picture with her dog that she adopted last year, named Pepita now. A fan commented, “It’s extremely heartbreaking to see her grow old”. Like, really?!

What drew our attention was Konkona’s witty reply  “Aww, don’t be sad. It’s a privilege to age as opposed to dying tragically young!”

There is a quote by Frank Lloyd Wright: “The longer I live, the more beautiful life becomes”. The fact that ageing actually brings more beauty in life. Humans are way smarter, experienced, and mature with growing age, and that’s the beauty of age.

Fans, your favourite celebrity is just as human as you are

In every film industry we know of, men seem to have a longer innings, even when they are older, and are just considered “classy, silvering”. But women are expected to remain young, and valued more as actors when they look young. This is nothing but objectification, considering women actors as less than human.

With her comment, Konkona has shown that she is more than just a pretty face. She’s human, before being a woman, and ageing is a phenomenon that is going to happen to everyone, including those fans who commented on her post. 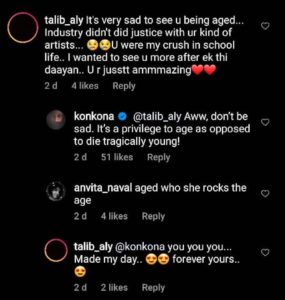 It is often noticed that fans don’t stop commenting negatively on celebrities’ posts. Some actresses even have to turn off the comment section on their posts due to heavy trolling or negative comments. Fans are there to support an actor, not to destroy them mentally. Why can’t we treat celebrities as normal humans? They, too, eat and walk like us and work for their livelihood.

Our grandmothers and grandfathers were once upon a time young too. They get wrinkles, dull skin, white hairs, and bad health with ageing. But we, as fans, accept our grandparents or parents being aged. Then, why is it hard to accept that Konkona is ageing? It isn’t even as if her ‘ageing’ is getting in the way of her superlative acting and directing, as many of her recent on screen appearances prove. Fans need to stop burdening celebrities with their insecurities and expectations.

Why does only outer beauty count in our society?

Looking old is a challenge for women living in a society where beauty and youth are equated and appearance is the primary means by which women gain and maintain status, ultimately losing this social status on ageing. Beauty commercials have dragged us to that stage which only counts clear skin, black hair, and polished lips as beauty.

It’s amazing to watch Madhuri Dixit Nene, Hema Malini, Rekha, Aishwarya Rai fighting with ageing and maintaining their body and beauty actively. But what is not amazing is that they are indirectly setting the bar for women to maintain those standards. Throughout our daily interactions with society, ordinary women like you and me bear this burden of ‘everlasting beauty’.  Some bodies bring white hair and wrinkles, and that’s completely okay. We are alive and thriving, and that’s what matters.

In this context, we must applaud actors like Konkona who accept the ageing, not just off screen, but also in their roles, playing their age.

Women are regularly told that this is an ideal height, weight, color, or size which you have to maintain. Even women’s breast size is a subject to society. We’re however, urged to look at the achievements of men, not their looks. If society is ready to consider men’s inner beauty, then why the double standard for women?

Konkona rescued and adopted an indie dog from the streets in the pandemic year, and has lovingly trained her. Her insta post was about this dog, and the happiness of the two of them together. Isn’t that enough beauty for these fans who’re obsessed with looks?

Bhumika is an English Majors undergraduate at the University Of Delhi and at this moment actively working with an NGO, as a content department associate that works for normalizing menstruation and promotes menstrual hygiene. She read more...

Bhumi Pednekar: Always Wanted To Play Roles Of Women Who Stand Up For Themselves And Society

Maharani Ahilyabai Holkar Of Malwa, Whose Reign Brought In A Golden Age For Her People

An All Women Ola FutureFactory Is What Modern Women Empowerment Must Look Like!

What We Know Of Jhalkari Bai, The Dalit Woman Commander Of Rani Laxmibai's Army

Her Education Stopped Because Of The Fear Of What Her Stalker Might Do...