As a 5th semester Delhi University student I definitely want to read Mahasweta Devi’s 'Draupadi' as well as Dalit authors Bama and Sukirtharini. Put them back into the syllabus!

As a 5th semester Delhi University student I definitely want to read Mahasweta Devi’s ‘Draupadi’ as well as Dalit authors Bama and Sukirtharini. Put them back into the syllabus!

An Oversight Committee of Delhi University has removed a short story by author Mahasweta Devi from the English Honours syllabus, along with two other Dalit writers Bama and Sukirtharini. It has sparked a heated debate, and many teachers, along with students, have criticized the decision.

Under the subject Women’s Writing, there has been a short story by celebrated author, Mahasweta Devi, ‘Draupadi’ which is being taught in the 5th semester since 1999. There have been other two Dalit woman writers that have been in the syllabus, but the Oversight Committee has set them to be removed from the syllabus.

This has sparked a protest as being casteist –  it is not a coincidence to remove all Dalit writers and stories set in Dalit communities at one go. The subject holds 17 writers, Indian as well as across the world, then why did the committee decide that only Dalit writers are not capable enough to give us an insight on Feminism?

If this has been a true ‘oversight’ from the Oversight Committee’s memory, let me remind you that Mahasweta Devi is the winner of the Sahitya Akademi Award, Jnanpith Award, and Padma Vibhushan from the Indian Government. Isn’t this also a reason to hold onto her?

As a student, I am very interested in her style of writing, as well as the reasons she has received such prestigious awards.

M K Pandit, the Oversight Committee’s chairman has called the protests and allegations against him as ‘unreasonable’. He stated, “There are many authors who deserve to be taught, not just one.”

If that’s the case, I’m curious why the other authors didn’t get replaced too and a new one introduced in their place. Why, for example, has the committee not removed another short story by Charlotte Perkins Gilman The Yellow Wallpaper and only found a Dalit writer as worthy to be dismissed from the student’s syllabus.

Further, he said, “I don’t know the caste of authors. I don’t believe in casteism. I don’t look at Indians as belonging to different castes.”

Sir, do you want to imply that you’re being ignorant of casteism in India and by removing Dalit authors, you want the students to do the same? Do you admit that you absolutely do not care about the hardship of the Dalit community?

The world, of course, still exists even if we shut our eyes. Only those from oppressor communities who are not affected by caste can afford to say things like “I don’t believe in casteism”. This statement altogether invalidates the plight and oppression of Dalit communities.

Another statement from his side says, “I can read English, you can read English. If something offensive is written somewhere, we don’t need a Ph.D. in literature to understand that.”

Reading about the Dalit community and the brutality they have been experiencing for centuries is essential for students to have an insight into the oppression. Yes, it surely is ‘offensive’ to those who oppress the ‘lower castes’ and can’t bear the fingers pointing towards the ‘upper castes’. There is a long history that shows how Dalits are silenced, as the committee is also doing by claiming that the Draupadi story or the writing of the other two Dalit authors, Bama and Sukirtharini, is ‘offensive”.

What does the Academic Council have to say?

There has been an Academic Council at the University of Delhi that participates in such decisions and pitches the defaults in the ongoing decisions. Now, the Academic Council is accusing OC of being unfair in suppressing such voices from the youth’s academics.

AC member Rajesh Singh has notified the OC that it has no right to take decisions on updating the syllabus. There has already been a Committee of Courses that gets approval from Faculties and the AC itself. 14 members of the AC have signed a dissent opposing the decision to take down the renowned story, which portrays women as egregious victims of war and conflict, which needs to be told, retold, and preserved as narratives.

Other members have accused the OC of being prejudiced against minorities, the underprivileged, and women since always. The OC does not have any Dalit member who can understand the rooted issues with this decision, and stand for and with Dalits. There are also accusations of the OC removed content like this from other subjects as well, including History, Political Science, and English itself earlier.

The University Of Delhi has released an official statement without admitting the fact that the decision is casteist. Even if the University doesn’t support such a mindset as the statement says, showing solidarity to the OC and saying  “syllabus has been passed through a democratic process” is not Ok. It has been clearly stated by the AC members that 14 members didn’t support the decision, so how is it democratic? 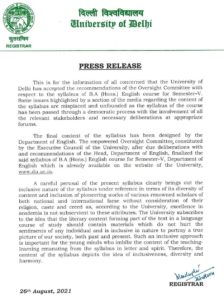 It looks like DU knows the fact that eliminating ‘Draupadi’ is unjustified so it needs an official statement, and yet justified it by releasing the statement in favour of the OC. The statement has mentioned that “the course of study should contain materials which do not hurt the sentiments of any individual,” but terminating Dalit content all at a single time has already hurt the sentiments of many ‘non-casteist’ people. Now, how will you mend that?

I will read it anyway

It is like the Oversight Committee wants to eliminate every text from the syllabus that focuses on minorities, riots, the queer community, women’s issues, or that against their own ideologies.

But this really isn’t about OC vs AC. It’s about the quality of education that the University of Delhi is famous for, which is now being degraded. If the youth won’t be aware of India’s history, how will the changes be brought? And if you agree, that our youth should also live in an orthodox and casteist society, I conclude this as your unhealthy mindset.

If the DU is removing the story for the stated reasons and in such a way, that certainly implies that it is definitely something worth reading. I am going to read it as soon as I finish this writing. Also, I will recommend the same to my juniors, whether it is kept in the syllabus or not. Eliminating a story does not mean we can’t read it; we certainly can and we will.

You read it too, here.