Yoga trainer Elodie has started a petition to make rape laws in India gender neutral. Here's why we need the amendment in the IPC.

Yoga trainer Elodie has started a petition to make rape laws in India gender-neutral. Here’s why we need the amendment in the IPC.

Trigger warning: This post contains details of sexual assault which may be triggering to survivors and certain readers.

In the last few years, there has been an increase in demand for the laws about rape and other forms of sexual assault to be made gender-neutral. People have criticised the gender-biased nature of these laws which don’t seem to protect everyone in the nation.

This has yet again gained momentum after a French yoga trainer Elodie filed charges of rape against Divya Dureja. Dureja who is an LGBTQIA activist and mental health advocate was arrested the day after the charges were filed. However, she was soon released on bail.

A copy of the first information report (FIR) uploaded on Elodie’s Instagram account shows the charges that were filed against Dureja. Dureja was charged under Section 342 of the Indian Penal Code (IPC) for wrongful confinement and Section 354 for sexual assault.

However, she wasn’t charged with rape by the Goa police. Section 375 of the IPC 1860, clearly states ‘man is said to commit rape’ and the victim is specified as a woman.

Why wasn’t she charged with rape?

In her Instagram post, Elodie says that she was subjected to immense emotional and physical pain by Dureja’s actions. She talks of Dureja ‘introducing her hands into the vagina’ of the survivor. The reason Dureja wasn’t charged with rape was that the IPC doesn’t recognise a woman as a perpetrator of rape.

This incident led Elodie to start a petition to make rape laws gender-neutral in India. 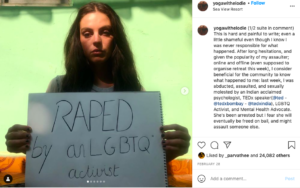 Elodie states in the petition that the section ‘defining rape as the act of a man puts at stake the sexual integrity of many.’ The petition seeks protection for everyone from sexual predators, irrespective of their sexual orientation, lifestyle choices, gender, or social background.

Elodie’s petition rightfully seeks for the psychological, physical and sexual integrity of every individual within the territory of India. It further states that every person should be guaranteed under the law of the land.

The petition needs attention and support

If the petition were to garner the support and momentum our legislators would have to consider the viability and prepare the road to make major amendments to the IPC. Specifically, sections relating to rape, sexual assault and other forms of sexual violence currently are framed only to protect women. While discussing and debating on a sub-judice case is not justified, the subject of the said public petition requires attention, discussion and support.

Most dictionary definitions of rape make it clear that it is an act of sexual intercourse or penetration committed by one person on another without obtaining consent. The gender of neither parties to the act has been taken into consideration.

However, the Indian Penal Code defines rape with clear gender demarcations. It’s 2021, isn’t it time the perception of rape by India’s legal system underwent a change, to ensure justice is delivered to every victim irrespective of their gender?

The Act remains gender-biased even today

The reason behind the gender-specific interpretation of the perpetrator and victim could be due to Section 375’s original specification. It considered the act of sexual intercourse with a woman under specified coercive circumstances as rape

This was amended through the Criminal Law (Amendment) Act 2013, also known as the Nirbhaya Act. Here the definition of sexual assault under Section 375 of IPC was more broadly defined to include penetration of the penis into the vagina, urethra, anus or mouth. Or penetration using any object or any part of the body to any extent, into the vagina, urethra or anus of a woman or making another person do so. Even the act of applying mouth or touching the private parts of a woman was specified to constitutes the offence of sexual assault.

However, despite this amendment, the perpetrator of the act was defined only as a man and it could be committed only on a woman. This has resulted in condemnation towards the amendment for it being biased to a specific gender.

The Supreme Court in its judgement of Navtej Singh Johar vs. Union of India Ministry of Law and Justice decriminalised consensual carnal intercourse. However, the issue of non-consensual carnal intercourse remains dicey as the same has not been equated with sexual assault or rape unless the act has been committed by a man and the victim is a woman.

The law needs to be gender-neutral to protect everyone

This is where the necessity to make rape laws gender-neutral comes into the picture. In fact, the 172nd law commission suggested that Section 375 of the IPC be made gender-neutral.

Justice JS Verma Committee constituted to strengthen laws against sexual violence. The Committee made the same suggestion and acknowledged that sexual assault can be committed against a man, transgender person, homosexual person or a transexual person.

Despite this, the Central Government said such an amendment would not be possible as “globally, offences like sexual harassment along with other offences like voyeurism or stalking are predominantly perpetrated by a man on a woman.”

Statistically, numbers do prove that majority of the victims of sexual violence are women. However, this has not prevented several countries from making the laws gender-neutral. The United States of America, the United Kingdom, Canada, Finland, Ireland and Australia are some countries that have gender-neutral laws for rape and sexual assault.

Anyone can be a victim of sexual assault!

By keeping the laws for sexual violence gender-specific, the Indian legal system seems to be denying justice to sections of its residents? Male victims of sexual violence often don’t report the crime due to skewed societal perceptions.

If despite all this,  a male victim were to gather the courage to seek justice, all avenues for the same would be closed. Simply because the law not recognising anyone other than women as the victims of sexual assault. This only acts as a further deterrent for the male survivors of sexual assault.

The more important aspect to be pondered on is should a female perpetrator of the crime walk away without being brought under the law? And the bigger injustice meted out here would be to the persons belonging to the LGBTQIA community.

On the one hand, homosexuality is no longer considered a crime under the IPC. However, on the other, coming out in the open and gaining acceptance from society for their sexual orientation is still a struggle for people from the LGBTQIA community.

Under such circumstances taking away their right to seek justice for sexual assault solely due to their or their perpetrator’s gender identity is injustice. The victims in such cases could be women too, as the case filed by Elodie describes.

Isn’t the amendment long due?

There is a section of legal experts who argue that making rape laws gender-neutral would lead to men making wrong use of the laws to further suppress and victimise women. While there could be a possibility for that, this is precisely why we have law enforcement and investigative agencies.

This reason doesn’t justify the victim being denied justice and protection under the law. The severity of the trauma of sexual violence remains the same, irrespective of gender, hence the legal recourse available should also be equal.

We all strive to see the day when society would be bereft of gender discriminations. Aren’t laws aimed at protecting only one gender from sexual assault or rape also discriminative? Don’t you think an amendment to the Indian Penal Code is long due?