Maha Navami this year falls on 24th October, which is marked as Women’s Day Off in the global history of the women’s movement – the day that got Iceland its highest gender equality in the world.

It may be sheer coincidence that this year Mahanavami is being celebrated on October 24th but it’s really interesting to celebrate the festival on this particular day, because both the days are connected with empowerment of women.

Superficially, they are quite different from one another, as the first one is a religious festival and the second one is known as a day of protest. But in a true sense, both are connected with empowerment of women and that makes the festival more interesting this year.

Mahanavami and the story behind it’s celebration

In a way, Navaratri is a festival that hails women power. And it’s not wrong to say that this is the only country where feminine power is worshipped so much. In every nook and corner of the country, Navaratri is celebrated with great fervor and there is no doubt about it.

But have we taken the festival in the right spirit or has it become a mere ritual? Let’s see the facts.

We should be ashamed of the plight of women in a country where female deities are worshipped from ages.

In a country where the deities of power, wealth and knowledge are Goddesses (Durga, Laxmi and Saraswati), it’s natural for anyone to assume the women in the country to be powerful, wealthy and educated. But unfortunately it’s not true here.

Ironically, women in our country are expected to be submissive, most of them are financially dependent, and are deprived of their right to education. In a country where the powerful Maa Durga who killed the chauvinist Mahishasura is worshipped, women are looked at as mere objects. If this is not irony what else?

So it’s not wrong if we say the Navaratri celebration ( which is symbolic of feminine power) has become a mere ritual and lost it’s true spirit.

While this is the case of Mahanavami celebration, let’s see the story of October 24th in the context of the global women’s movement, Women’s Day Off.

In today’s world, Iceland has the best gender equality in real terms, but this did not happen all of a sudden or without any protests. The women of Iceland fought for their rights and earned them.

One such protest which was more significant happened in 1975 on October 24th. This is known as Women’s Day Off or Long Friday in the history of Iceland.

At that time majority of women could not go to work due to household responsibilities, and those who worked also did not get equal pay with the men. So the women in Iceland wanted to protest against these two things.

Women’s organisations gave a call for the protest and almost 25,000 women (of the nearly 60,000 in Iceland at the time) participated in this protest. They quit their respective work at 2pm on October 24th. Even the womenfolk who did not hold jobs and were homemakers did not cook or attend to any house hold chores, and almost the nation came to a standstill. At midnight they called off the strike and everything came back to normalcy. 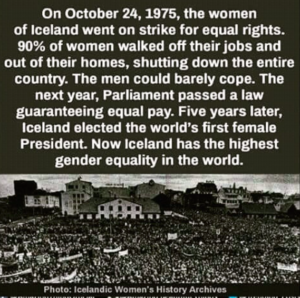 As a result of this laws were passed for equal pay and work opportunities for women. And that’s the story of true empowerment of women.

After reading these two stories, now let’s decide whether we just want to be part of rituals, or should we fight for our rights and become empowered. It’s for us to decide. Hope this Maha Navami brings a change in our thought process and makes us courageous enough to raise our voices for our rights.

Image source: a still from the film Kahaani and Með Johannes Jansson/norden.org, CC BY 2.5 dk, Link

Home maker at present. Worked as English teacher. My short stories and poems are published