In a very recent article, we talked about the interwoven nature of women’s hair and India’s culture. What happens when a lady doesn’t just chop her hair but shaves her entire hair off?

It is an indisputable fact that our hair forms a huge part of our personality, our outlook and our self-reflection. Who doesn’t feel great, confident and pretty on a ‘good hair day’? But why let our hair possess such power? Why let our hair define us in terms of beauty?

Let’s hear the stories of some women who decided to shave their head during this lockdown. And who are confidently flaunting their bald head regardless of what the society expects from them.

If it’s presentable and neat, should the rest matter?

“I think as long as you look presentable, neat and professional, the rest of it shouldn’t really matter”- Piyusha Vir 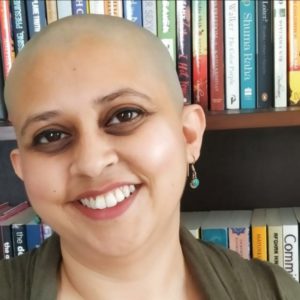 For a long time, Piyusha wanted to donate her hair to cancer survivors. So, in the month of June as soon as the salons were open, she made a snap decision to shave her hair for the

She says, “It was difficult for me too. Maybe that’s why all these years, I didn’t actually do what I wanted to. I only mustered the courage now.”

Piyusha belonged to the hotel  industry where appearances are given utmost importance and she definitely believes that appearances do matter. But, she doesn’t agree with the opinion that appearances are everything. “I think as long as you look presentable, neat and professional, the rest of it shouldn’t really matter.”

Talking about the society’s beauty standards for women, she says “Unfortunately, as a society we focus too much on appearances and beauty. We need to consciously fight against that.”

After shaving her hair, Piyusha thinks she has become bolder, more uninhibited, more confident of her looks and less dependent on products. She recalls how her barber was stunned when he realised that she wanted to shave all of her hair.

“So you’ll wear a wig?”, “Oh, so you’ll wear a scarf?”, “Then you’ll keep it like this?” She says that the idea of women being bald is too alien to people.

The ‘wow WHAT’ factor of bald women

“Growing up, I too was fascinated with bald women.”-Aparna Goyal 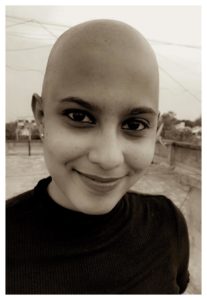 Aparna had been planning to shave her head for the last five years. And this lockdown provided her with the opportunity to smoothly go ahead with her plan.

Aparna says “There’s always a certain “WOW WHAT?!” factor associated with girls going bald. Growing up, I too was fascinated with bald women.” She further added, “For women who are hosting lovely long goldilocks, shaving their heads off is a bold move. There’s a certain amount of gumption and self-confidence that goes into making that decision, and living with it.”

While the majority of the people admired her new look, some people also posed awkward questions and weird glances. Aparna says that she answered people’s questions by saying ‘Oh it’s just for hair health,’ ‘It’s better for growth.’

According to her, prescribed feminine standards are only as fluid or solidified as we make them. “If we don’t push against these standards who will?”

For her, it has been a process of self-discovery and change. She says, “My perception and awareness of myself picked up twice as fast after the event. I couldn’t be happier about the decision.”

Embracing your flaws and focusing on yourself

“We should embrace our flaws, focus on body positivity and remember that there’s more to a person than their exterior.”-Vanshica Nahar

Vanshica didn’t have any concrete reason for going bald. “It was just something I wanted to do,” she said. “The society has laid down unrealistic beauty standards which are introduced to females at a young age through various means. This makes them insecure and uncomfortable in their own bodies.

“We should embrace our flaws, focus on body positivity and remember that there’s more to a person than their exterior. It’s high time we realise that these standards are nothing but marketing propaganda.”

Vanshica says she feels bolder and empowered after this decision. “Obviously a new haircut isn’t a huge change, but now I feel more confident about my decisions, even of the ones which aren’t expected of me.” She recalls how most of the people were surprised and many were curious to know her reason behind it.

But she’s grateful to her female friends who showered their support and appreciation. “I was surprised to know that everyone deemed it an act of courage, for a woman shaving her head.”

My identity and my hair

“I feel like a lot of my identity as a woman seemed to hinge around my hair.”-Hema Gopinathan 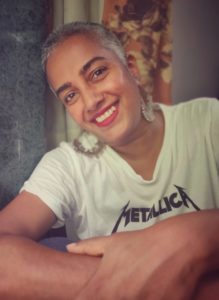 “I wasn’t fighting misogyny or patriarchy or the artificial standards of beauty while shaving my hair. It was partly because of how I would feel about it. It was to challenge that aspect within myself that will I feel any differently? And it was like giving up on some aspect of you which you cherish and deeply value. I feel like a lot of my identity as a woman seemed to hinge around my hair.”

Hema thinks that her hair is an embellishment and baldness is a sort of nakedness. “Without the hair, that’s what you actually are.” she said. While shaving her head, Hema felt like she was commemorating her mother who died due to breast cancer.

Talking about the society’s beauty standards for women, Hema said, “In Tamil Nadu where I come from it’s very important to have long hair. But you aren’t supposed to leave your hair open. It means your character is not good. The moment a woman has a haircut, judgments start flowing free and fast. Why did she have to do that? She had such lovely hair.”

She recalls how her stylist recoiled with horror when he realised that she wanted to shave her entire hair off. The only reason which convinced her stylist was that she was shaving her hair because of a mannat. “I was very apprehensive of what I would look like with a bald head. Emotionally I felt much lighter but physically I felt very heavy for the next couple of days.”

Recalling people’s reactions, she says “People responded very favourably.  Everybody loved it, particularly women. A couple of them told me how I inspired them and they got their hair shaved. Within every woman with long hair resides a woman who wants to shave it all off and become bald.”

Small acts like these help us fight patriarchy and misogyny with one step at a time. These acts may not seem mighty, but are revolutionary in itself. Let’s pledge to fight all kinds of gender bias, big and small, one step at a time!

Picture credits: Provided by the interviews