Enola Holmes is not your run of the mill story. With lovely performances, it is a nuanced take on a feminist unafraid woman.

Enola Holmes is not your run of the mill story. With lovely performances, it is a nuanced take on a feminist unafraid woman.

After a painfully long wait, Netflix finally released ‘Enola Holmes’ on Wednesday. At 7 pm sharp, I wrapped up my professional commitments and readied myself to watch it as attentively as possible.

After all, a detective movie, especially one based on Sherlock Holmes’ sister calls for undivided attention, lest you miss clues or important details!

Helmed by Emmy winning Harry Bradbeer, the movie is based on the book series by Nancy Springer. Although, essentially a sleuthing story, Enola Holmes combines a multitude of elements that make for a great watch.

Set in the backdrop of Victorian England and the Women’s Suffrage Movement, it is a refreshingly feminist movie through and through. It is a powerful tribute to fearless women who are often termed wild or uncouth by society and who dare to change the world. Women who do not shrink themselves to appease spineless men who feel ‘less than’ when faced with confident women.

At the very outset, Enola – played by the exceptionally versatile, Millie Bobbie Brown – points out that her name spelt backwards is ‘Alone.’ And therein, the two central themes of the movie are revealed. The first being abandonment issues and the second, solving puzzles.

She surprises you with her courage and attitude

As a child, Enola had experienced abandonment from close quarters. Her father had died long before she could know him. Her brothers – Sherlock (Henry Cavill) and Mycroft (Sam Claflin) leave shortly after, leaving her no room to get to know them either. 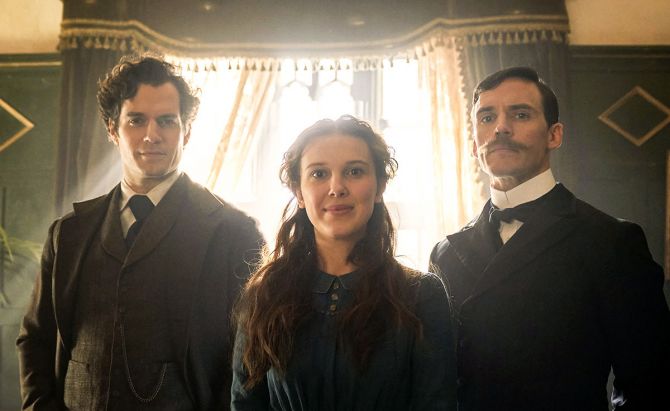 One would assume that having encountered grief at such a young age would make a person bitter and cynical. But, that’s where Enola surprises you! You will not see her bemoan her challenges or cry about the mammoth losses she has faced in life. Instead you see her fight back with unflinching courage. She refuses to be embittered from past experiences and chooses instead, to find humour in every situation.

Her relationship with her mother is beautiful

Growing up with a single parent, without the presence of a prominent male figure, Enola’s world revolves around her mother Eudoria (Helena Bonham Carter) With Eudoria, she becomes accustomed to an unrestrained way of life, an oddity in those days. Together, they are free to be as whimsical as they please.

It translates beautifully onscreen as they are seen playing tennis and practicing archery indoors, breaking several decorative artefacts. And sometimes even injuring themselves. But, nothing deters them from living full lives, thwarting society’s ideals of the same!

But, Eudoria, although immensely indulgent and protective towards Enola, had a secret life which she kept away from Enola. She would often have private meetings with people – meetings Enola wasn’t privy to. Until one day – on Enola’s 16th birthday – Eudoria vanishes without a trace, leaving Enola with a series of riddles disguised as gifts.

Enola’s brother tries to tame her but in vain

The disappearance of their mother prompts Sherlock and Mycroft to come back home. Horrified to see baby Enola replaced by an untamed wildflower, Mycroft takes matters into his own hands. And he decides to send her off to a finishing school to turn her into a ‘young lady.’

He argues that going to the school would train her to become an appropriate wife for someone someday. An indignant Enola vehemently protests against wanting a husband. What follows is a heated exchange between the two with Mycroft contending, ‘that is another thing that needs to be educated out of you.’ Which is a sly, sarcastic jibe at their mother.

But, would our rebellious little Enola concede defeat and comply with her brother’s demands? Oh, hell no! Disguised as a boy to throw her brothers off her scent, she sets out to London on a quest for her mother.

On the journey she meets Lord Viscount Tewksbury (Louis Partridge) and gets embroiled in another mystery. Initially, the introduction of this character seems unnecessary. However, as the story unfolds we realize both stories are deliciously intertwined.

How two people on largely divergent paths unite over a common goal is intriguing to watch! Sterling performances and excellent coming timing propel the movie forward – even though it falters at certain points.

A sister of a towering figure, yet always her own person, Enola is a beautiful reminder to be your own self everyday. She is never once overshadowed by her brother’s reach. In fact, in this particular movie Henry Cavill’s dapper Sherlock, is reduced to a mere afterthought in comparison to Millie Bobby Brown’s Enola.

Enola Holmes is not your run of the mill story. It is a nuanced take on a woman unafraid to take on a patriarchal world. Of a woman who refuses to bow down to society’s yardstick of how a proper lady should behave. And of a woman who defies a life chosen for her by others.