Malayalam movie stars (women) have been hashtagging #yeswehavelegs and #womenwithlegs with their pictures in shorts. Apparently, a whole bunch of mallu men took offence at the actor Anaswara Rajan putting a pic on her Instagram wearing SHORTS. The kind that girls in my son’s school wear in Bangalore (his school does not have a uniform) and what my colleagues wear outside of work and what I wear daily at home.

So in short, Anaswara was showered with the vilest of misogynistic abuses in Malayalam for wearing what girls and women in most cities across the world wear every single day.

Badass answer – by Anaswara Rajan as well as other women

Which is what brought out the rest of the women posting pics of themselves showing their legs off with these hashtags, like the a story this instagrammer put up with #womenwithlegs.

Hats off to the women for supporting her, and especially Anaswara who followed it up with ANOTHER pic of her in shorts and a badass caption. 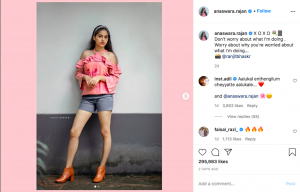 I don’t care if you argue that these pics might be giving men exactly what they want to see because these men clearly don’t want to see their favorite actresses ‘exposed’ but wouldn’t mind watching Shakeela or Silk Smitha or Sunny Leone with far fewer clothes.

Clearly, we have a ‘kulastree’ category among film stars too?

To give credit where it’s due, for every ten misogynistic mallu male trolls, there are nine broad-minded men who now stand with women. Small mercies.

But do we really, in this day and age, need to get so worked up about a pair of shorts?

This is the problem in Kerala…if this one misogynistic mindset is cleared, it would indeed be a paradise for women. As of now, it is not. I still don’t have the courage to flaunt shorts outside home in Kerala.

Why was this a problem? Let me explain

I recently saw a video by a YouTuber whose video was blocked because it showed ‘nudity’ by YouTube’s standards, when in reality she was just trying out new clothes. In response to that, and to test YouTube, she made a video with her male friend trying out the same clothes but that video was not blocked when you can clearly see his body much more than you could see hers. Why?

Female bodies are always sexualised, which is why there’s always either an attempt to cover them up or expose them. Its always an extreme, never in the middle.

The answer is, because society is patriarchal. It is (straight, cis-het) men who have made the rules for generations. It is these men who hold positions of power in government and media houses (again, enabled by patriarchal structures). So it is these men who get to decide what women do with their bodies, from the clothes we wear to our sexual and reproductive choices.

Men can dress or undress any way they want., because these cis-het men don’t get turned on by male bodies. Hence no sexualization of male bodies.  But they do get turned on by female bodies. So they want the woman being sexual only on their terms. It’s a question of ‘control’. They want to dictate and design and choreograph how she turns them on. If she decides to do it ON HER TERMS, then it’s a problem.

Men are afraid of women they can’t control

This is exactly why Cardi B got into trouble. Why Rehana Fatima got into trouble. Why women are shamed if nudes, taken by them, get leaked but there is no shame in men leaking out those nudes. Why women on screen in skimpy clothing is okay but not your own daughter wearing shorts. Why an actress on screen wearing a bikini is okay but her putting up a bikini pic on her Insta is not okay.

But you can’t control your own self so you think it will be easier to control her. So you police her dressing so that you don’t get turned on again and don’t have to feel ashamed of yourself again.

In short, men control women because they have no control over themselves.

I feel the root of this problem is the shame that is associated with sex, with sexual desire, and sexual feelings. If it was considered normal, you would just indulge in it (by yourself or consensually with another) without feeling guilty.

Would we have so much of policing around women’s bodies if that was the case?

This is why Anaswara Rajan was abused for her integral picture in shorts. She was looked at as a ‘good’ girl suddenly gone rogue, out of these men’s control. And no, they could not digest that.