My Identity As A Homemaker

A woman, specifically a homemaker or a mother, who enjoys her motherhood journey gets pinch at some point of time by the word “Identity.”

The Initial phase of motherhood involves being around the child and his development. Reaching all the baby milestones in the prescribed timeline is the basic project of a mother. Once the child becomes independent enough to manage his activity to some extent, the mother starts searching for her identity. This is the heaviest term for any woman as it may lead her to either happiness or depression. Many women leave their professional career and become a full-time mother but few of them start repenting later in life.

What does “identity” mean?

The dictionary meaning of identity is “who you are, the way you think about yourself, the way you are viewed by the world and the characteristics that define you.”

But we interpret identity as the one who is earning and has a social status. So, if a woman or mother is not earning, she has no identity of her own. We mothers need to change this interpretation and try to think in a different approach.

A mother’s identity is her own individuality. History has exemplified many influential mothers as we know, who have brought reformation by their upbringing. There are endless names. Many famous personalities reached the limelight because they were backed by a talented mother.

A mother can make her unique identity by following her dreams and passion by stepping again into the professional world. If she is skeptical regarding joining back, then she can aspire many hobbies on various platforms. Painting, dance, music, gardening, baking teaching, blog writing, cooking, to name a few.

Her hobby becomes her passion and blooms her life with self-confidence. Don’t restrict these hobbies to self, rather spread it out to friends and community. Start exploring it on a higher level. Be your own competitor and achieve your target. A hobby of yours can land you to an earning and make you famous, like we often get to see on the television and internet.

I am a homemaker, not by force but by choice. I am a mother of 2 beautiful souls, a teacher who takes tuition ( a hobby which provides with an earning), a blogger, dress designer and I have a lovely social circle. I have made my identity as a multitalented mom, and so can us all. 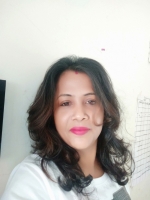 Sagarika Sahoo has done MBA and M.Com and pursued her career as a lecturer.

Penguin: Keerthy Suresh’s Powerful Performance As A Mom On A Quest For Her Missing Child