Do You Know The Untold Stories Of The Women Who Fought For Both India’s And Their Own Freedom?

Amma’s Daughters by Meenal Shrivastava is an awe inspiring look into the lives of freedom fighter women who fought both colonial rule and patriarchy.

In telling us the story of her grandmother, Prakashwati, through the eyes of her daughter Surekha (the author’s mother), Meenal Shrivastava outlines how the women who fought for independence had to contend with outright misogyny and casual sexism, and in doing so offers a glimpse into some timeless facets of feminism and activism.

“Amma did not regret that she had confronted that sorry individual and given him a fiery lecture on the role that ordinary women had played, beginning long before Gandhiji became the leader of the movement. She had rattled off the long list of names of women who had, with her, participated in protest rallies and courted arrest during the civil disobedience movement. She questioned his notion that any political activist could function without the active support of mothers, wives, sisters and other women in their families. Some men, she pointed out, had only served the nationalist cause after they were shamed into it by the women of their families.” ~ Excerpted from Amma’s Daughters, by Meenal Shrivastava.

Quick, name five women who participated in the Indian Independence Movement. It would not be surprising, if most of the names you came up with as a layperson, were of wives/ daughters/ sisters of prominent male leaders of the struggle for independence.

It is easy to assume that women who were not drawn into the movement by their male relatives, didn’t contribute much to the movement. After all, even today, women in India are not exactly encouraged to participate in politics and activism. Back then, it would have been even more likely that most middle class women, stuck close to tradition, stayed home and tended to the kids, while the men went out and fought against colonialism, right?

The truth is that the names of too many women and their stories have been erased. As Meenal Shrivastava writes, in the preface to Amma’s Daughters, “of the more than eighty thousand people arrested during the civil disobedience of 1930-31, some seventeen thousand, or better than one in five, were women.”

One amongst this seventeen thousand, was a twelve year old girl, Shanti, who was later given the name of Prakashwati (the titular Amma).

Amma’s Daughters, is the story of Prakashwati, and her daughters, Abha and Surekha, written by her granddaughter, Meenal. Interestingly, Meenal has chosen to write this memoir in the voice of her mother, Surekha, whose life long, and unfortunately unfulfilled dream it was, to write down her mother’s story.

It is then, a story, not just about one woman, but also the story of a family, of a nation, and of women and feminism, in this country.

Women today, are still waiting for their freedoms

Through various incidents in the book, Meenal shows how the women who participated in the freedom struggle had two parallel fights to win. One, like everyone else, they participated in the freedom struggle itself. And two, they fought against patriarchy, and pushed the boundaries drawn for them by society. Some women, like Amma’s friend, Lalita, defied their own families, as they stepped out to participate in the freedom movement, and found themselves disowned. Others, found that that their contributions were discounted, and ignored, even though they had put in as much sweat and blood into the work as their male colleagues.

From an incident in which she is shamed by a local party leader, for “remaining outside the folds of family and marriage,” to how her desire to remain unmarried and serve the nation is discounted, even by Gandhiji himself, many incidents in Amma’s life bear a striking resemblance to some of the issues faced by  single women even today. No matter what they have achieved, or what they want for themselves, a woman today is still looked down upon, if she is not married.

Finding one’s individuality even within a family

Amma’s objections overruled, she is married off to a man who is just as uninterested in family ties. The result is a highly unconventional family.

Both Amma and Babu are highly principled, and they endeavor to pass on their idealism to their daughters. They educate them and speak to them with respect instead of infantilizing  them. In current times, when many of us are having conversations about how to raise children who are socially responsible, this is a heartening example of how to do so.

Amma doesn’t let marriage and the responsibility of raising children distract her from her goal of women empowerment. She isn’t a helicopter mom. Instead she raises her daughters to be independent, and does not hesitate to leave them with friends and relatives, while she goes away for days on end.

She isn’t the ‘perfect mother,’ and the book doesn’t attempt to portray her as one.  If you judge her for that, then you must judge her husband too, for he disappears without a word, for years!

This too, Amma takes in her stride. In fact, one could say that she is the sun around which the family revolves. It is she who is the real breadwinner and the emotional core.

Even as the author highlights the idealism and social consciousness of Amma and Babu, she also doesn’t shrink away from presenting them as flawed people. For example, she acknowledges the fault lines in their marriage, and points out how Babu, in his vehement opposition to some of Amma’s beliefs would engage in verbal abuse.

The role of privilege in society

In many places, the book highlights how privilege operates in our society. For example, Amma points out how the wives/sisters of prominent, upper caste, male freedom fighters who were jailed, received better facilities and treatment than women who did not have these connections.

Even for Amma, the lack of a family becomes a stumbling block. As opposed to Babu, who has the privilege to give up his family ties, for her, as a woman, that became a signal to society that she is ‘unclaimed.’

Babu’s family is a zamindar family. Amma protests the ‘relentless feudalism’, and ‘exploitative social norms’ ingrained in their lifestyle but she does not outright reject the family ties as well. Babu, on the other hand, tries to avoid his family completely. Irrespective of how much distance they keep, however, both Babu and she, receive the benefits of their social (class and caste) background. Unfortunately, this does not get acknowledged enough in the book.

Amma has a strong sense of sisterhood, as evidenced by many incidents narrated in the book.

To raise her children, she leans heavily on the women around her – her neighbours, and her sister freedom fighters. The trust, camaraderie and sisterhood between them is a pleasure to read about. They each have their own problems in life, but the way they are there for each other is heartwarming.

While Amma is a strict and demanding mother, she is also a loving and supportive one. The strikes the right balance between discipline and allowing her daughters freedom. 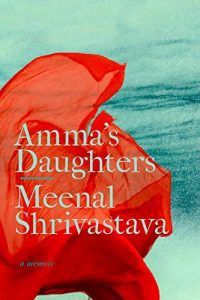 When her elder daughter, Abha, ‘rebels’ against her principles, and wants to marry into a family that goes against everything Amma stands for, she is understanding. She reminds her daughter that, “you do not have to wait for pallbearers to rescue you from a life you do not want. Just one phone call to your mother, and she will come running to protect you.”

If only more parents had that attitude!

An equally tender moment is one in which she speaks to Surekha about beauty and identity. “But there are no shortcuts, my dear daughter, in defining yourself. What anyone else sees in you is extremely subjective, ever changing with time. What matters is what you discover and rediscover within yourself,” she says, echoing the sage advice that every daughter wants to hear from a mother.

Equally touching is the relationship between Abha and Surekha. Sisters by blood, of course, but also by circumstance. How these two women, so different from each other, become each other’s biggest support, is something that anyone who has had a sister will connect with.

Just for these explorations of women’s relationships with each other, Amma’s Daughters is a must read.

In all honesty, I could go on and on about all the ways in which this book touched me, but that would do a disservice to other readers who want to experience the book for themselves. And this is a book that everyone should read.

There is much wisdom and inspiration in these pages, much that is relevant even today. Reading Amma’s Daughters has been a revelation. While I can trace how much we have come forward, thanks to the work done by our foremothers, it also brings into sharp focus how much hasn’t changed in all these years. However, that is not discouraging.

On the contrary, Amma’s Daughters makes a strong case for women’s participation in social and political causes. This is not the time to sit and wait, but the time to speak louder and lead from the front.

If you would like to pick up a copy of Amma’s Daughters by Meenal Shrivastava, use our affiliate links at Amazon India, and at Amazon US.

Image source: the book website that has a free downloadable version of the book, book cover Amazon

I Want To Confess To My Guilt, Daughter, Before I Die

At 15, The Fiery Saraswathi Rajamani Was The Youngest Spy To Join India’s Freedom Movement