New Female Tribes by Rachel Pashley offers us many clues as to why women make great leaders, leading from the front during the Covid-19 pandemic.

With the world’s ongoing battle with a pandemic, it is waking up to many incredible realisations. One such realisation is that for some mysterious reasons, nations with women in positions of power are doing comparatively better.

Well, the answer to that mystery might lie in the book, New Female Tribes by Rachel Pashley.

This is a non-fiction book that documents the largest conducted female insight study done within the advertising industry by J. Walter Thompson, that they called ‘Female Tribes’. What an interesting name!

Not a book review

The moment I started reading this book I knew that I would not be able to review this book because it deserves more than a two-paragraph review; it deserves a complete article at the very least! Not only because how important this book is, but because of the amount of information it covers. 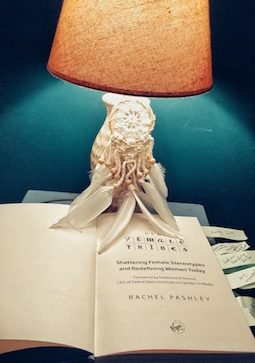 This book is a documentation that contains research conducted with 8000 women, aged 17-70 years, across 19 countries over the span of 5 years.

The book categorises women broadly into three types: Alphas (the money-makers, goal-diggers, matriarchs), Hedonists (the pleasure-seekers, beauty-enhancing, self-developing tribe) and the altruists (the givers, social change-makers and creative artists seeking to make the world little better), and then it explores them with insight and without judgement.

I genuinely hope this book becomes a part of university gender studies courses someday because this is a Pandora’s box of women’s issues ranging from the economic roles they play in small communities, to sexual upliftment of women across the globe.

Apart from extensively talking about the barriers women have to face and overcome in all walks of life as compared to men, this book also sheds light on the existing stereotypes about seemingly ‘liberated’ Western women v/s their ‘oppressed’ Asian, African and Latino counterparts, and how glaringly wrong many of those are, without being derogatory to anyone. 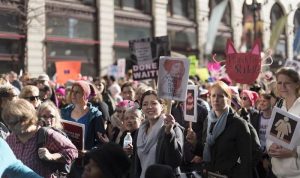 Let’s look at shattering a few of these stereotypes.

Every time someone defends movies with horribly-written female characters or with no female characters at all saying, ‘it’s just a movie!’, let them know it’s more than that. Especially so because the portrayal of women has remained regressive for decades now and it’s begging for a change. Whether we like it or not, what we see on celluloid makes a cerebral difference. This study echoed the same, with one out of four Brazilian women who took part in the study admitting to have found the courage to leave an abusive relationship after seeing a strong on-screen female role model.

Photo by Ian Kiragu on Unsplash

The entire continent that has been ravaged for its resources by Western nations – which continues even today – has seen a tremendous rise both in terms of its power status in international forums as well its economic boom. A lot of it can be attributed to the women of the continent who are taking charge from the forefront, politically speaking. Eleven African nations have managed to attain 30% of political representation in lower houses of parliament which is 11% higher than in the US. Not just that, 42% and 43% of seats in parliament in South Africa and Senegal respectively are held by women. (See photo of book above)

According this study, sub-Saharan women are the most entrepreneurial group among all women in the world. So, safe to say, it’s time for Africa!

Contrary to the popular belief, the women of Latina communities hold a lot of power within their communities. Interestingly, the Latina matriarchs are aware of that and use their power to spread goodness around, owing to their sense of collective responsibility. 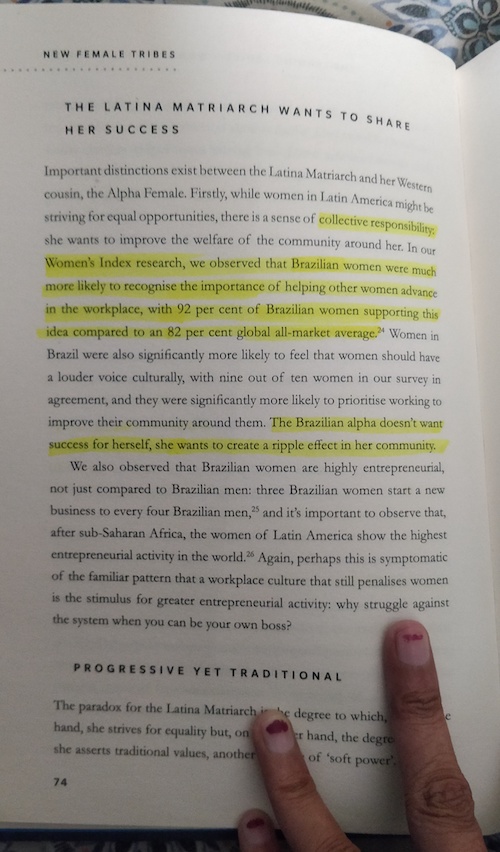 Indian women have to battle and shatter a lot of stereotypes both at home and on international forums. This book includes several of those shattered stereotypes about us, one being women are ‘bad with money’. 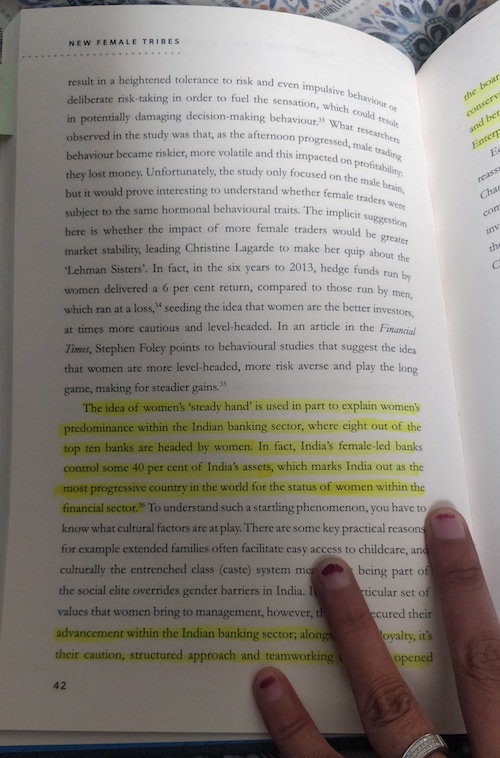 As of 2018, 8 out of 10 top banks in India were headed by women and many of those banks under female leadership initiated several programs to help women like financial literary classes, concessionary rates for women, etc.

Photo by Jyotirmoy Gupta on Unsplash

A staggering 92% of Indian women use technology to feel and be more empowered and around 59% of Indian women don’t mind postponing their marriage and childbearing in order to focus on their careers. 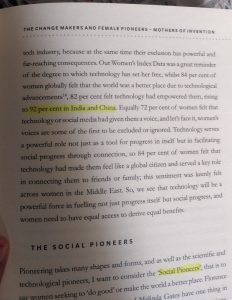 And with maternity policies and work from home options in place in big corporate companies, even motherhood has become less of a hindrance for the urban Indian women. ‘Mumbai Millennials’ is another term used in this book to categorize the Indian, urban, Alpha women focused on succeeding in their careers. Honestly, I have mixed feelings about that name but that’s for another day.

This book doesn’t demonize men or attack them in anyway. It only focuses on the struggles, achievements, patterns of development of women and because of them the society at large. The primary purpose of this book was to gain more insight into them so advertising industry can change their perspective and brands can rethink the way they market their products, but the research became too big and important in the process and their findings turned out to have great social relevance far exceeding their initial goals.

There are thousands other things that I can write about the information covered in this book, but then why would you want to read the book right?

So, I stop here and urge you to get a copy as you as can and give it a read; and more importantly, pass it on to the next person once you are done. 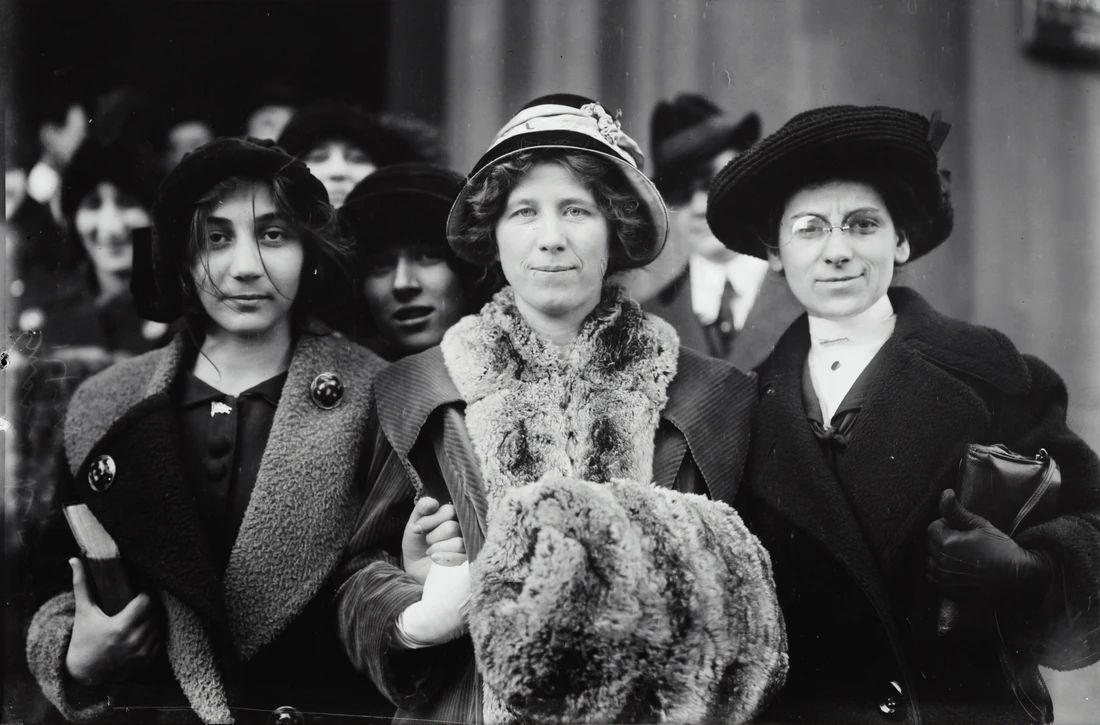 Top image via Wikipedia, and all other images with sources as provided by the author

Why Refugees Need To Be Seen As Whole Human Beings, More Than Their ‘Victim’Hood