Women’s needs are never considered essentials, so no one, including the govt, realises that sanitary supplies are critical for a woman’s menstrual health.

Today, 28th May is Menstrual Hygiene Day, and this is an essential conversation to have.

Recently when celebrity chef Vikas Khanna took the initiative of arranging and distributing food to the migrant labour in the lockdown period, he also gave free sanitary napkins to them.

Some of the men among these accepted the food items, but threw away the sanitary napkins. Disturbed by the attitude of these men, he posted a tweet expressing disappointment on such behaviour.

Think about when lockdown was first announced in March. When essentials were decided upon so that they were available in stock, no one thought of the one essential need of women (most women, except the trans women) – that of safe and hygienic menstrual care. Sanitary products were absent from ‘essentials’.

Women irrespective of caste, colour, religion, country, bleed every month, a fact that every adult knows. The process is completely natural and imperative for the species to grow and develop. But as it concerns and happens only to women, is not considered a primary need.

The use of a sanitary napkin to maintain hygiene during the regular cycle is as essential as having a balanced meal every day. But what we consider as important is not so for the menfolk. Why? Because they haven’t undergone it, so they would never understand it.

And we still don’t talk about it as much as we should with the boys and men. In fact the whole discussion about periods is still a taboo for many. It’s an issue spoken of in hushed tones, behind the closed doors.

We women have silently borne the pain associated with this regular cycle and also at times withstood the stigma and the taboo hiding the stained clothes, something the menfolk are often ignorant of.

In another case when the celebrity Divya Aggarwal shared a post about undergoing periods on her social media account, she was trolled and shamed for sharing such private details, but she came back with a fitting reply. 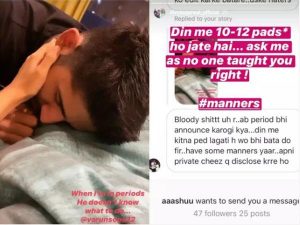 Yes, these are private details, but something publicly known.

But not giving the freedom to talk about it is another sort of discrimination women face.

The fact is that until this issue is not openly discussed in families in the presence of fathers and brothers, the men will not understand what we go through every month.

For the men folk to understand the importance of sanitary napkins, the issue needs to be openly discussed within the family, making the process as natural as eating, drinking, or attending nature’s call.

An education that is needed

The real problem is the lack of proper education and information about the process. The men in question knew the importance of food and consumed it. If it would have been excess, they would have happily taken it with them for use in some time, then why not with sanitary napkins.

So now if they knew the importance of sanitary napkins for their women counterparts, they would have kept them or returned them to the distributor with due respect.

Thanks to Mr. Vikas Khanna on voicing out our concern that sanitary napkins are as essential as a food item, which the government failed to recognise when formulating guidelines for GST.

The need of the hour is the acceptance of periods being a natural cycle and no taboos or restrictions being attached to it.

Talk about it, understand the whys and hows, and if you still don’t like it, don’t shame another for sharing it.

Women’s Web is leading a fundraiser for providing sanitary supplies to female led households in underprivileged communities through community outreach. You can donate here.

Writing started on an impulse as a means to vent out emotional distress. Now it

Sanitary Pads Essential For Women, Not On Initial Essentials List For Govt?

My Experience With Distributing Sanitary Pads During The Pandemic