A blond girl, a suitcase, a road and in the end, a waiting car. The hand that rises saying goodbye to her beloved dog that she will never see again. Has this been the origin of her thought?

“For some nomads any place is their home, for others, no place is home and I was one of them.” Robyn Davidson

“When there is no one to remind you what the rules of society are, and there is nothing that keeps you linked to that society, you better be prepared for some surprising changes.” And the magic really appeared in strange and unexpected ways.

In 1975, an Australian named Robyn Davidson decided to leave the city where she lived to embark on a journey that would take her from Alice Springs to the Indian Ocean, through the great Australian desert. For two years she worked for a camel breeder and learned everything necessary to handle the animals and survive in the desert.During this training period she met Rick Smolan, a photographer for National Geographic. And so, in 1977, with four camels : Dookie , an adult male, Bub, a female named Zeleika and her baby, Goliath- and her beloved dog Diggity, Davidson embarked on a life-changing adventure… the compass would always mark the west. She didn’t tell anyone why she was going, and really what she wanted was to be left alone. But she also needed money, so Smolan (known photographer of Robyn) helped present her to the National Geographic editors who offered him funds in exchange for her story. In turn, Smolan, 28, was assigned to photograph her trip to the magazine. Davidson just wanted him to leave. 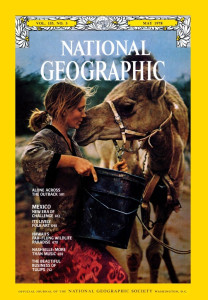 After that first stop that served as a training base and in which she learned how the animal thinks and feels, but that was actually somewhat frustrating since the commitment to give her two wild camels was not fulfilled. They were 8 months of intense work as a pawn to leave with practically empty hands.But … the road was giving at every step its compensation.An experienced Afghan camel driver, whom she met walking the desert, gave her a very well earned opportunity to continue training and learning and of this way, at the end of her work, to be able to count on the camels to continue the journey. One day, while still there, she saw a car loaded with people arrive. They were her dearest friends who had managed to find her asking around if they seen the “woman of the camels”. With that data, it was not difficult to find Robyn. For someone in love with the purity of the desert, the open and quiet spaces and in favor of the idea that “when you stay too much time in one place, it is best to throw a grenade and jump. And pray”, this visit was like dying. 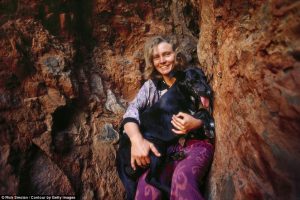 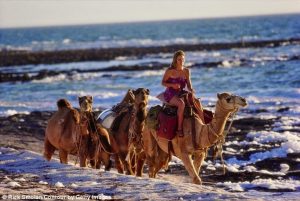 Conversations raging on her part, insistence that she abandon the idea on the part of her friends and an offer of Smolan to take pictures of her trip and publish them in the National Geographic magazine, in exchange for getting her the necessary funds to finance her dream. Robyn accepted not with much enthusiasm on the condition that they were only three meetings, not more than that. Last place she had contact with friends and acquaintances and a farewell letter:

“I know you enough not to ask why you do this or why you want to do it alone. I guess if you have a good reason, it’s fine for me. Anyway, record a tape for your trip, a friend told me that you used to listen to it until dawn. Whatever you look for Roby, find it and come home.Yes? In case you change your mind: Jack Lister. National Geographic Magazine.

And it was time to say goodbye between Robyn and the old cameleer. There was really affection between them. He gave her advice for the road, a warning for when she arrived at Uluru, better known as Ayers Rock, the largest solitary rock in the world and that it has a history that goes back to the beginning of time. He told her that this site is sacred to the Pitjantjara and Loritja tribes for more than 10,000 years and that she would find several sacred places as well as customs that would be vital for anyone to know how to respect. Besides, a necessary gift and a warning without turns: a rifle that should use in case of encountering wild camels. “If you see a wild camel do not think about it and shoot. Just do it.” It was necessary to do it on one occasion and saved her life. With her four camels, her dog Diggity and her compass always marking the west, undertook the journey.A first surprising paradise as an oasis in the middle of the seething nothingness offers a well of water perfectly furrowed by stones that seemed to be specially prepared for her.After joining forces, it was difficult to leave the place to follow.

Every so often, the presence of Smolan with his photos. An annoyance that she could not even want to hide the invasion and made it impossible for him to even achieve a smile. “They say that the best photos are the product of human feeling” he said with his best patience trying to change her mood but only managed to enrage her even more. It was never very well known if this unconditionality was due to loyalty to her or to National Geographic. In the case of Robyn, she felt uncomfortable and at the same time bad with herself because she thought: “Dealing with vulgar people is easy. Dealing with good people is difficult because how do you say you want to see them dead? He got her money and at the same time was part of the problem. But … unexpectedly, after having endured a kind of simun together and having reached the limit of patience and the annoyance, the romance. A kiss that neither of them imagined and an intimate encounter. At dawn, the cold farewell and a “see you in five weeks”, as if nothing had happened.

The magic of the second oasis with a different water mirror and a flock of hundreds of white birds brought Robyn the company of an old native guide, Mr. Eddie, a Pitjantjatjara man. In principle, he was only going to accompany her for two days, but in the end she stayed at her side for three weeks, traveling about 200 miles of her trip. She said: “I still think of our three weeks together on the road as the heart of my whole trip” -They didn’t speak the same language, just a few words in English but two very well learned: “Women don’t break the rules” and “Good luck.” That was what he said at his farewell, giving Robyn a sacred stone as an amulet. Again the road alone and a destination that came closer and closer to each step. Fire and camels sitting next to it, Robyn in her makeshift bed hugging Diggity and a song still playing on the radio. Tragic instant. Her dog, in one of the night outings, had drunk poison from an abandoned jar. There was no return. The rifle served once more but for a heartbreaking end. Everything seemed to have lost meaning from that moment. She recognized herself alone, was touched by herself missing him and needed to hug Smolan when they met again, as a consolation that she couldn’t avoid. The photographer was her “invisible”and unconscious support until her final destiny.

As the day is born from the darkest night, an immense stretch of white and endless dunes gave way to an Indian Ocean as blue as you can imagine and even more so for Robyn’s eyes, and finally, a dive that led her to stay for a few moments suspended in depth as if she had belonged there all her life.
“Camel trips don’t start or end, they just change shape.”

Due to the attention that caused the article published later in the magazine, Robyn decided to write a book, entitled “Tracks” (which won the Thomas Cook Award for travel books, among others), where she detailed her experiences in the desert.

That long road inside opened another door: contact with aboriginal tribes, an experience that marked Robyn for the rest of her life. A life dedicated to traveling and studying nomadic peoples from half the world. Years later he repeated experience in India and collected her experiences with the nomadic peoples of the Asian country in ‘Dessert places’. “I continue writing and traveling a lot, particularly to India, which was my home for 20 years. I lived there with nomads and I see them periodically again”, she explains. Of course, she has made her “base in Australia”, the place where she was born and where it all began.

“You are as powerful and strong as you allow it. The hardest part of any effort is to take the first step, make the first decision.”

I love design in all its forms,photography,books,writing and cinema as much us