From that famous phrase thought exclusively as a tribute to define “the best adornment for a woman is silence” until today, a long road has been traveled. From the moment in which women decide to take charge of their own individuality without complexes or taboos, luck was cast.

This feminist impulse has awakened the senses of women in all cultures by naming behaviors that were assumed to be “normal” and accepted with passivity and resignation in the slightest and everyday cases and with despair and claim in the most violent. There are some cultures in which feminism must fight much more complicated battles to find a channel of expression because the contexts in which they develop present extreme violence as a result of firmly rooted patriarchates. In other societies taken a big boost but is equally resisted in some of its manifestations although with other characteristics leaving in evidence the complicity of a cultural, artistic and even Governmental environment that allows certain practices. 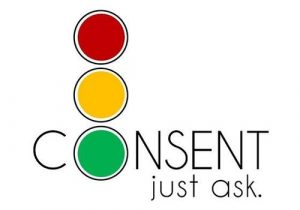 The issue of consent has caused in women the desire to regain their individuality, their power and the need to approach their being. Thinking about its meaning, we see that it practically encompasses everything since it implies the fact of admitting, accepting, tolerating something.

It appears as an almost totally feminine verb within a context in which women demand themselves and suffer the requirement of allow or not something and men permanently seek their consent. The consequences of accepting or refusing, with all the nuances that may occur, fall only on women. In the animal world for example, there are also intelligence, affections and forms of communication through an instinctive consent that obeys its own nature and the chemistry of the body that makes, for example, the female only receptive when her biological cycle allows it, an insurmountable barrier , even for the wildest and most aggressive male.

However, that rejection does not imply any violent or deadly reaction towards the female. It is a natural occurrence for both of them and they know it. In many cases you can agree to have an intimate relationship but not really want to do it.It may happen that you accept for fear of your anger, for the desire to please the other, to take care of the love bond, etc.

The body does not feel violated but the will is not present in both equally, that is to say in consent, the will is linked but not implied, one thing does not imply the other.

Beyond the intimate moment itself, as it comes to it is also a matter of personal choice, of individual freedom: where it is performed and characteristics of the environment, undressing or desire to veil the body when there are certain parts that , for some reason ,embarrass or bother, use or not of a condom, protect or expose sex, subversion or submission, etc. Even so, despite being all agreed, the need to suspend for some reason may occur and should also be accepted without any violence.

I remember a movie in which the protagonist had suffered the removal of one of her breasts as a result of cancer, being compromised intimacy with her husband as a result of this. At one point she meets a man with whom a relationship begins and, since the first moment, it went beyond the physical attraction. There was a feeling of real affection in both. When the first intimate encounter occurred, she not only kept her torso covered but did not allow even a touch in that place. In the successive meetings, it was already impossible to maintain that attitude without any explanation. A sincere dialogue resulted in the miracle: a consent completely reciprocated by her will and a total response from her partner, loving and wishing her especially for her lack above all else, getting a full sex-affective relationship.

When this situation was discovered by her daughter, she felt, I don’t know if the need or duty, to rebuilt the relationship with her husband, trying an intimate encounter in which the consent was compromised but on the part of the man. It was a consent but without a will. The condition of his wife, the lack of a breast, was a limitation that he did not allow a return in the relationship. He had the intention to do it but his whole body and mind said no. And he couldn’t. Two men faced with the same situation, two completely opposite answers: consent versus will (husband), consent plus absolute will (lover).

Literature has also taken care of this issue. An example is the book “With the consent of the body. Diary of a future mother” by Marie and Therese Bertherat and Paule Brung. The author explains to her daughter Marie, pregnant, the game of forces that come to life inside and proposes 14 movements that will awaken in her, her sensitivity to subtle sensations and the will to inhabit his body in all corners, with tenderness, respect for himself and her unborn child so that do it in freedom. This point is reached precisely, only with the consent of the mind, heart and body. In every being there is the will to admit that condition.

As a result of this, there may also be the possibility of having an intimate consensual relationship in which the will is implicit but to find an unwanted result such as a pregnancy. In this case there would be a non-acceptance of the body to that new condition, which would lead to the dangerous dilemma between abortion yes, abortion no.
Vanessa Springora unleashes a cultural scandal in France with her book “Le Consentment” (Consent)

The editor opened Pandora’s box of pedophilia and her frequent apology between a certain artistic and intellectual elite in her country. She tells her relationship with Matzneff, a controversial and provocative writer, when he was 49 years old and she is 13. Now is the time for debate with the sudden change that the issue of consent in general has gained worldwide with the feminist impulse, which it still finds a lot of resistance in France, especially when some believe it takes American parameters.

This is an autobiographical book in which she mainly reflects on the inequality in sex-affective bonds and the socio-cultural traps that enable these relationships.

At the time of the encounter, she was a puber recently abandoned by a violent father, full of insecurities and romantic ideas. At a dinner with friends of her mother, she was watched by a man with attention and desire for the first time in her life and she was captivated.This man of almost 50 years and a youthful air enveloped her with secret and lit messages.A few weeks later she was living an intense and deep, forbidden and epic love.The relationship lasted two years but at the few months it was transformed into a nightmare of manipulation and control, losing the little self-esteem that remained, ending completely destroyed physically and psychically. The whole world was aware but nobody cared too much.

To herself, the consent is not the time to say yes but rather a land in which you can get bogged down. Despite her 14 years, she was not completely devoid of common sense and also, until today it is difficult for her to put herself in the victim’s place because it would be to deny that what she felt was real, that her desire was legitimate, not just the manipulation of a psychopath.

Each person encloses a universe in itself which makes the examples of consent present thousands of daily manifestations, if there is the possibility, to a greater or lesser degree, of deciding on the body itself. Different is the case in which male supremacy and women’s lack of power result in the impossibility of free elections, which leads to generally impracticable consent since a NO surely would end up in a extreme and horrible situation such a rape.It is necessary to bear in mind that sex without consent is rape, which happens in couples much more commonly than it is admitted.

Too many theories are exposed daily, many sayings  there are about it but, when two free wills aware and practicing what respect for each other means are found, the “how things are”, “how things should be” and “how they should not be”, they decide in the moment in which the door closes.

I love design in all its forms,photography,books,writing and cinema as much us

What Is Indian Culture Anyway?

Bollywood, Your Double Standards Show You Up With ‘Sanju’! #SlowClap