In the '90s, the Ramayana series brought to the fore our latent Savarna values of honour, and a longing for a Hindu rashtra. I do hope that doesn't happen this time.

In the ’90s, the Ramayana series captured the nation’s imagination – and changed society in ways that were not all good. Let’s hope it is better this time around?

We have entered into the first weekend of the nationwide lockdown. The fear of COVID-19 entering into the dreaded ‘3rd stage’ (Into denial that it already has!) bringing a widespread community transmission has kept most of us holed up into the comfort – or discomfort of our homes. And yet, whether out of necessity, ignorance or simply arrogance, people are seen violating the lockdown and venturing out of their homes in steady numbers.

When the police baton and the pleas of the medical experts and (for-a-change) hapless leaders do not work, a novel idea to make people stay back in their homes is recently being tested. Popular mythological show Ramayana which had become a household name in the 1990s is being telecasted on the national public broadcaster Doordarshan once again. The announcement was made by Prakash Javdekar, the Minister of information and Broadcasting on ‘popular demand’. The first episode was aired today.

A throwback to the late 1980s and mid 1990s when it was aired on television, the Ramayana show held a reputation for stirring the people from their mundane household duties and work and transfixing them to their TV screens. Streets were deserted in the time when it was aired, and people who happened to be out, rushed to their homes for the viewing episodes, uninterrupted.

An ominous side effect

Around the early 1990s, when the first round of Ramayana was over on Doordarshan (it was aired two times again after periodic intervals), LK Advani led the Ram Rath Yatra (political and religious rally) across the length and breadth of the country, appealing to the Hindu brethren to join in the re-construction (as it was believed) of the Ram Mandir in the place where a century old Mosque stood.

We all know what happened after that. The demolition of the Mosque by the kar sevaks, the riots that it caused, the blasts that followed soon after, the violence, the rapes, the bloodshed. Incidents that refuse to be wiped out from our collective memories even after so many years.

The timing when this, Hindu religion’s oldest epic, Ramayana was introduced to the Indian masses through a visual representation was thus perfect. People – men particularly from the upper caste Hindu households revelled in the values of honour, sacrifice (of the other!), and annihilation of the enemy which lays their eyes on your women that Ramayana seemed to stand for, in their eyes.

Completing it was the idea of masculine role model that leads the way towards the Ram Rajya, and many followed by giving their money, muscle and tactical support.

A fear of new catastrophe

Cut to the present times. My first thought when I heard the announcement was that it was a very good decision. If it is mythology, not science that is keeping people safe in their homes, so be it. As I saw the first episode however, an old discomfort stepped in.

The fear came to my mind, that the serial which had created such influence over the minds of the people back then, would again be a catalyst – albeit small – for history to repeat itself. And here I am talking about the mass hysteria part, not small damaging ways in which it will seep in patriarchal values of honour and propriety back in families again, which is of course another of my fears.

We have recently proved that we are still prone to superstition and unscientific thinking, not to mention herd mentality (the banging of thalis to generate cosmic urja that will chase away the virus!).

After the pandemic passes, whether or not we manage to evade the mass deaths, the recession and the unemployment will inevitable. People will already be up to each other’s throats for money and food.

NRC and CAA are waiting our doorstep. Amidst the chaos, Shaheen Bagh will be revived, with new potent fears of being deprived from basic necessities, along with being stripped off their citizenship, which is anyways there.

Riots may ensue again, prodded by leaders looking to play the old games again. The state dividing on communal angle, just as the class faultlines are widening and cracking, and will have severe repercussions for all of us, over and above the damage the COVID-19 will cause.

And the role of Ramayana, again?

And in this will be the people who had been watching Ramayana in their homes, dreaming once again of the glories of Hindu Rastra, and the Ram Rajya it will bring that would wipe fear, crime and greed from the society. In the pursuit of that faux ideal, that nobody but they themselves are standing in way to, simple manipulations by the right wing leaders would suffice to incite people over again.

Once again Ramayana will be used to justify and support the people who set forth to eliminate the ‘other’.

Maybe I am exaggerating. Maybe the news of death, illnesses and lack of resources to handle the situation that keeps playing on every damn media is playing with my mind too, making me anxious for the future. I do think that in spite of flawed characters, Ramayana is a beautiful, timeless story of love and longing. I do understand that people also need a break from the news and want to steep in the old era of simplicity, faith and family values to reduce their stress. All that is granted and accepted! Only if we promise to remain scientifically focussed, rationally motivated and more loving & giving after we step out from our homes. Pay heed, the Ramayan preaches the last in abundance! 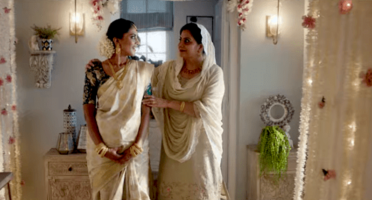 Would The Tanishq Ad Have Been Spared If These 'Buts' Were Taken Care Of?