An interesting excerpt from Shanta Gokhale’s empowering memoir One Foot On The Ground: A Life Told Through the Body, that won the Crossword Book Award in the English Non-fiction (Jury) category at their 2019 edition.

Those days Sindhu Maushi, my mother’s sixth sibling, born a few minutes before her twin brother Sudhakar, was staying with us for her college education. She was slim, built straight from shoulders to feet with no curves in between. The only curve in her body was in the nose. The story went that she had once fallen on her face and broken her nose. It had never healed properly, leaving her with a bump on the bridge that made her look like Julius Caesar in profile. The other notable thing about her nose was that she could touch its tip with the tip of her tongue. Her twin brother Sudhakar, not being identical, couldn’t do the tongue-to-nose trick; but he could wiggle his ears without moving any other muscle in the vicinity.

Sindhu Maushi had a temper. She came to Bombay from Dahanu, bag and baggage, after a quarrel with Ghanashyam Narayan Behere or Anna Mama, to whom Nana, King Lear-like, had handed over the running of his rice-mill manufacturing plant lock, stock and barrel. Sindhu Maushi was running a high temperature on the day she arrived. Anna Mama later informed Mother in a long letter, written in his beautiful handwriting, that he would henceforth have nothing to do with Sindhu Maushi. So she was now the exclusive responsibility of Gopal Gundo and Indira Gokhale of Lalit Estate, Bhandarwada Road, Shivaji Park, Dadar. But being their responsibility didn’t stop her from losing her temper with them. Father, who delighted in pulling people’s legs, once bent curiously over a piece of embroidery she was working on and said, ‘Those look like horns, so that must be a bull.’ He was referring to the antennae of a purple butterfly she was embroidering in satin stitch on a pink poplin table-cloth for which Mrs Purohit, her embroidery teacher, had congratulated her. Sindhu Maushi’s nostrils flared and she didn’t speak to Father for a fortnight.

Sindhu Maushi went to SNDT college, following in the footsteps of her older sister Naloo Maushi, who had also stayed with us during her college years, and my mother. I became Sindhu Maushi’s tail. I followed her everywhere like Mary’s lamb and grew to know and get fond of all her friends, a jolly group of girls no more than a few years older than me. She even took me to her college a couple of times where she introduced me to the canteen manager Ramaswamy who made the world’s freshest, crispest sev-puri.

Sindhu Maushi played a competent game of table tennis or ping-pong as she called it. She also played a vigorous game of ‘Ring’, known semi-formally as ring tennis and formally as tennequoits. Vanita Samaj, of which she became a table tennis member, was a brisk ten-minute walk away from our house towards Dadar beach. In those days it comprised one big hall under a tiled roof surrounded by a verandah with a kitchen attached, where the ever-smiling, gruff-voiced Leelatai Limaye supervised the making of foodstuffs that rendered two sets of social service simultaneously. It gave employment to women who needed it; and it supplied quality-guaranteed flours and eats to the club’s middle-class members who did not have time to make them. Years later Vanita Samaj added an indoor badminton court behind the main building and, a few more years later, an auditorium with bad acoustics on the side. The auditorium soon became the desired wedding venue for upwardly mobile Marathi families. On Friday afternoons, Vanita Samaj members were entertained to talks, music, dance, drama, mimicry and magic shows arranged by the club’s entertainment committee. On all other evenings, a table-tennis table was set up in the middle of the hall.

This is where I went with Sindhu Maushi and learned to play my first indoor game. While I picked up the game pretty quickly, what I most looked forward to was watching the club’s champions Ms Angre and Ms More play each other. Their forehand and backhand smashes set the goals I wanted to reach. I played the game with much love and dedication and even reached a point where I could do the Angre-More smashes. But then I discovered badminton which was to become the love of my life. Nirmal took to table-tennis later and, as with every game she played, excelled in it, reaching University and State competition level.

The one thing Sindhu Maushi failed to teach me was mounting a bicycle. Sudhakar Mama, who had joined the Victoria Jubilee Technical Institute for a diploma in automobile engineering, lived in its hostel and spent many Sundays at our house, also tried and failed. I desperately wanted to learn and he could hardly refuse to teach me with Mother’s excellent lunch as reward. So he would push the bicycle we hired from Babu Cyclewala’s corner shop to Shivaji Park, put me on and watch me go. ‘Now try and get on yourself. I’m not going to help,’ he would say. I was all eagerness. But the attempt always ended with the cycle and me on the ground. Sudhakar Mama couldn’t figure out what my problem was. The problem was that mounting a cycle involved the briefest moment of being ungrounded. You ran beside the machine with your left foot on the nearside pedal; and even before you were sure it was secure, you threw your right leg over the seat to catch the rotating pedal on the other side. So for a fraction of a second, both your feet were ungrounded and you were wobbling. That sent me into a panic. Mother called it my one-foot-on-the-ground syndrome. One foot had to be grounded before I would lift the other. Mother had once dreamt of flying. A dream like that would have been my nightmare.

The month my periods began, Sindhu Maushi and her friends had organized a picnic to Vihar Lake. I was invited. Vihar Lake, created by damming the Mithi river, was the city’s first piped water supply scheme and a very popular picnic spot. Powai and Tansa Lakes came later. The Vihar Lake picnic happened to be on the eleventh day of my period. Mother said don’t go. I said but I’m not leaking. Just spotting. It’s so little, I’m not even wearing my harness. Mother sighed and said, then go. So off I went with Sindhu Maushi and Shashi Gangal and Kala Kolhatkar and the rest of the group. They were all in saris. I went menstrually unprotected in a pair of cheerful red dungarees and a yellow T-shirt. Mother had made the dungarees and I was very proud of them. 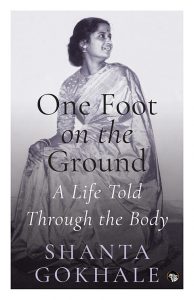 By the time we sat down to our picnic lunch, I had begun to feel strangely sticky down there. I whispered my suspicion to Sindhu Maushi. She walked me to a cramped enclosure of corrugated tin sheets and a hole in the ground that served as an improvised toilet for picnickers and asked me to check out the state of things. The state of things was bad. Sindhu Maushi told me to stay put in the ‘toilet’. Since there was no roof to the shelter I could peer over the top, which I did. One of Sindhu Maushi’s friends whipped out a towel from her copious bag. She was one of those people who carried pills and plasters, cotton thread and needles, clips and pins, empty bottles and boxes even to picnics—‘just in case’. Sindhu Maushi handed me the towel over the top of the toilet. I shed my dungarees and undies and wrapped myself in the towel. My dungarees and undies vanished over the top. Another friend carried them to a trickle of water, source unknown, to wash. Meanwhile, other friends of Maushi’s made a jock-strap out of handkerchiefs tied together. More handkerchiefs were gathered into a wad. My harness was ready. ‘Get into that and come out,’ Sindhu Maushi said with a sigh. She was kindness itself. Her friends too behaved as if fitting out young girls with an improvised sanitary harness was routine.

Stepping out of the toilet in my towel and T-shirt, I felt a little like our local narielwala. The only thing missing was the basket of coconuts from which I could pick one out, shake it at my ear to make sure it was full of water, put it on my thigh, shave off the top with a slicing knife, and hand the open fruit with a flourish to eagerly waiting hands. How often had I watched this refined performance with awe. And now I was in the right costume but with no props to make it meaningful.

We didn’t do much picnicking after that. My dungarees lay drying on a rock and were ready to wear only when we were ready to leave. Meanwhile Sindhu Maushi and one of her friends sat with me playing paanch-teen-don. I lost as I always did and still do at card games. The others had wandered away to have a good time. We could hear them singing and shouting and laughing. Tricked out in a towel and T-shirt, playing a losing game of paanch-teen-don, I remember thinking it was no fun being a girl. But the takeaway from the picnic was my first precious experience of sisterhood.

Shanta Gokhale is a novelist, playwright, translator, cultural critic, columnist and theatre historian. She has written two novels in Marathi, Rita Welinkar and Tya Varshi. Both won the Maharashtra State Award for the best novel of the year and have been translated by her into English. Apart from several plays, she has also translated Smritichitre: The Memoirs of a Spirited Wife by Lakshmibai Tilak and the novel Kautik on Embers (Dhag) by Uddhav J. Shelke. She has written and edited several other books on theatre, including The Scenes We Made: An Oral History of Experimental Theatre in Mumbai. In 2016, Shanta Gokhale received the Sangeet Natak Akademi Award for her overall contribution to the performing arts.

Excerpted with permission of Speaking Tiger, an extract from the chapter Menstruation from One Foot On The Ground: A Life Told Through the Body by Shanta Gokhale, available at bookstores and at Amazon India, and Amazon US