Why are women the only ones shamed for being financially independent and falling in love with an older man? De De Pyaar De gives a refreshing take on this.

Recently, my mother and I watched the movie De De Pyaar De. And the first thing she said was, “Nowadays, all these weird things have become a trend.”

That comment of hers really annoyed me since that was not something I would expect from the woman who always supported my independence. So at that very moment, I asked her which character she thought was the one I could relate to? Was it the 26-year-old independent, non-conformist, career oriented girl? Or the responsible home-maker turned entrepreneur, Tabu?

Immediately, she said, I was like the younger and charming lady- strong headed and determined. And then she gave the crux of the movie which is a romantic comedy based on the life of a 50-year-old man who faces disapproval from his family and ex-wife for falling in love with a 26-year-old woman.

Why are rules laid down only for girls?

The next thing I asked her was why did she make the comment she did. To which she said, the age difference and the living in, the smoking and drinking, all this doesn’t ‘suit girls.’ I was shocked and dismayed. Though Bollywood has become slightly more progressive, our society, still hasn’t.

In no way, am I supporting smoking or drinking but I do have an issue with these rules being laid down explicitly and only for women and girls.

A girl who drinks, smokes, is financially independent, wears what she wants and has a mind of her own is frowned up. At the same time, a girl who always obeys her parents, wears traditional Indian clothes, does household chores without complaining, while also balancing work and home is an ideal!

She has to discuss, but he doesn’t!

Despite calling ourselves ‘progressive,’ we expect our daughters to keep her family in the loop about her whereabouts. We tell them not to demand too much of their husband’s attention or his time. They are expected to discuss each and every decision of theirs with their family members and have limited financial independence. Doesn’t this make us a regressive society?

In case there is a conflict with the in-laws, the men rarely support their wives. They either keep quiet or worse, claim that if their mother is fine with the rules of the house, why is the wife making such a hue and cry?

Most Indian men grow up watching their mothers do certain things and believe that it is the right way to be. Men, whose mothers have a career, often see them do the household chores and managing a work life as well. And for them, independence comes from having these superhuman qualities of balancing home and work while also conforming to the social norms set for women.

Marriage is not the end-all anymore

We need to understand that today, for a financially independent and strong willed girl, marriage does not add anything exclusive to her life. Gone are those days, when girls looked for financial security through marriage. The days when marriage was simply a trade where the male earned the bread and the female managed the house.

We aren’t living in those times. Today, I am someone who contributes equally in running the house- both financially and physically. My husband does the same. We are both responsible for everything equally. So the privilege to equality is my right and I need not put too many efforts into getting it.

What feminism means to me

I believe that feminism isn’t JUST empowerment, it is also about equality. We don’t need anyone to walk an extra mile for us when we can walk hand-in-hand on any path we choose.

If the men are not expected to do the household chores, give up their career, change their lifestyles, the same need not be expected of women either.

At the same time, if the woman gives up her career, by choice, adjusts to having her in-laws around, the choice needs to be respected. Given how it is her choice, it need not be seen as regressive. On the other hand, if she chooses to not take a break from work, or doesn’t want to give up certain aspects of her lifestyle, she shouldn’t be called selfish. We cannot put women in such boxes. Women, just like everyone else, have the right to live by their own choices.

Why I liked the movie

The movie really struck home with me as it did not go back and show us the impractical happy reunion of the couple who was separated for 25 years. Neither did it revolve around the blame game where the husband and wife keep pointing fingers at each other for the divorce. It dealt with the issue rather sensitively.

The second half of the movie is definitely intense. It is here that Tabu points out to her husband that the divorce was never one person’s fault alone. It needs to involve both the people and no outsider can understand the gravity of it the way these two people do. She also points out that if the age difference didn’t matter 30 years ago when parents made that choice for their daughters why does it make a difference now? Didn’t parents force their daughters to marry older grooms earlier?

The film also shows how divorce should never be looked as a taboo. Sometimes jumping out of a sinking ship is the only way out we have. Who knows, by swimming you probably have a second chance at life.

The best part is De De Pyar De is just not a rom-com, but it attempts to have a progressive view for our society. And with so many contemporary series around, we must say Bollywood is doing good work. 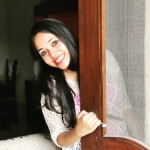 An SAP consultant by profession with a wanderlust driven soul, I find happiness in penning