While only 9 women won in the recent Jharkhand elections, it's interesting that they all have no criminal records. High time we have more women politics?

While only 9 women won in the recent Jharkhand elections, it’s interesting that they all have no criminal records. High time we have more women politics?

A report was published by the Association of Democratic Reforms (ADR). The report noted that a total number of 237 candidates stood for the elections. Out of these, 208 candidates were men forming the dominant 87.8 percent, while women candidates were only 29 in number forming a 12.2 percent.

Of the 29 women candidates, only nine women won the seats from their respective constituencies.

Pushpa Devi is a candidate from Chattarpur constituency. She stood for the Bharatiya Janta Party. The result for Chattarpur was declared and she emerged victorious. At the age of 46, she is primarily a housewife. Her affidavit does not disclose details of her educational background apart from saying “literate.”

45-year-old Sabita Mahato stood from Ichagarh constituency. Her profession was declared in the affidavit states social service. She stood for the Jharkhand Mukti Morcha (JMM).

While We Wait For Delhi Elections Results, Take A Min To Note The Low Percentage Of Female Candidates! 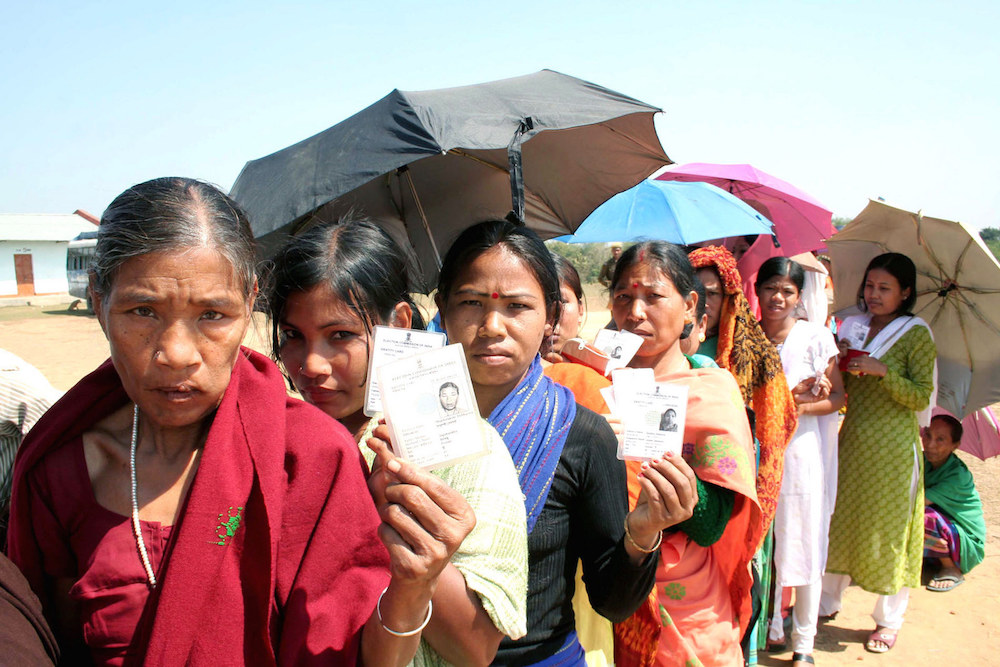 As a candidate for JMM she stood from Jama constituency. Jama has seats reserved for candidates belonging from the Scheduled Tribes. Sita Murmu is 44 and works as a political and social worker. She studied till higher secondary from the Jharkhand Academic Council.

A Congress candidate, she stood from Jharia constituency. She is 34 and is a housewife. Purnima Niraj Singh is one of the few MLAs who has done her post-graduation. She holds a degree in Advertising and Marketing from Amity University.

From the constituency of Koderma, Dr. Yadav contested as a BJP candidate. Dr. Yadav is 48 and a social worker who has worked with the Jharkhand government at one point. She holds several degrees, including an M.Com and a B.Ed from Ranchi University, and a PhD from Vinoba University, Hazaribagh.

From the constituency of Mahagama (Godda), she contested for the Indian National Congress (INC). She is 44 and a media consultant and social worker. Deepika holds a B.Sc Biology Honours, a PG diploma in Information Management and a LLB degree.

Jharkhand politics is incomplete without the mention of Joba Majhi at least once. She contested from Manoharpur for JMM. At 55, agriculture and legislation is her primary occupation. She is a 10th pass but her educational qualification is no match for her work.

At 50, she contested from Nirsa (Dhanbad) for the BJP. She is a politician and has studied up till class 10.

From Ramgarh constituency, Mamta Devi stood for the INC. She is 34 and is primarily a housewife and a social worker. She holds a B.A from Vinoba Bhave University.

What’s interesting is that most of these women have listed themselves as homemakers and have studied only up till high school. However, despite all that, they have all won elections earlier as well for their respective parties.

They have done work in their respective constituencies and that must have made people put their trust in them again. An interesting feature is that most of the women MLAs here in the list have no criminal cases against their name.

It’s interesting that despite their clean criminal records, only nine women were elected during this elections. Isn’t it time for political parties to start taking in more women?

Draupadi Murmu: Jharkhand’s Ex-Governor Is The Face Of Tribal Feminism In Modern India

Draupadi Murmu, a formidable bosslady, whose absence creates an undeniable hollow in Jharkhand, could usher a new era in Odia rajniti (politics).