It was the Diwali week, the week of great Indian festive season, I called my bosom friend to wish her the greetings of Diwali and check if she had gone for the medical check-up she was supposed to do.

Though she is my childhood friend, I was a little hesitant to ring her up for the fear of disturbing her super busy schedule. It only happens in India where men celebrate the festivals whereas women of the house are supposed to cook, clean the houses and fulfill other festive duties forgetting their health and other awful things happening to them.

She sounded tired, so I asked her, “How are you, Aanchal, did you go for your health checkup? What do the reports say?”

“No, yar, Diwali ne to diwala nikal dia hai mera! (I am screwed up in this festive season!) Forget the checkup, I don’t even have time to get enough sleep,” she complained.

“But health comes first, no! Should I request Jija Ji to take you to a specialist?” I worriedly asked.

“No, no! Don’t even mention this to him. He takes good care of me, and that’s why he has got me medicines from a local doctor.” She tried hard to show her husband’s concern for her.

The excuses she was making are not new to me. She always treats them like they are true if I ask her about her health. Annoyed, I asked her, “But, aren’t you supposed to reach out to a good gynaecologist? Anyways, what did your doctor say about your irregular periods? Why has your body and stomach got swollen?”

“The doctor feels the swelling is due to a lack of hemoglobin in my body. But what’s troubling me the most is I don’t fit into my old dresses. Everyone confuses my body swelling with a weight gain that supposedly signals I am getting ‘healthier’. It’s not their fault as well because they are supposed to believe only what they see.” This is how she further covered up the inhumane behavior of her family towards her.

I felt extremely annoyed after disconnecting the call. Anchal is 30 and has been married for 9 years. She a mother of 2 kids now, lives in a very small town of  Uttar Pradesh with her husband and in-laws. Also, she has been facing some health issues for the past 2-3 years and is still forced to do household chores singlehandedly (without complaints) with her ailing body.

During festivals, and family functions, her health condition gets more pathetic. Neither of her families (parents and in-laws) bother about her poor health condition. I often feel who is more responsible for her condition, her parents, or her husband and in-laws?

Women’s health not being taken seriously

It is not only the Anchal who is being deprived of getting proper healthcare, but it’s the story of every other Indian woman across the country, especially of those who are living in the far-flung areas of U.P, Bihar, and Rajasthan. Many Indian women face gender and geographic discrimination every day and feel victimized when it comes to their wellbeing.

A study conducted by experts from India and Harvard University reveals that Indian women suffer from gender bias while accessing health care. Getting medical help is still a distant dream for women in India. The gender-discrimination is leaving a bad impact on their health. Experts found that out of 2 million patients, only 37% of women could get access to healthcare as compared to 67% of men.

Like Anchal, both families (parents and in-laws ) of women don’t bring them to specialized hospitals because it means spending a lot of money on travel and hospital expenses. Apart from irregular periods, Anchal also has been suffering spinal health problems past 2 years which she never got the proper treatment for. She also faced many side effects due to seeking care from unqualified providers.

Mindsets that prevents women from voicing their health problems

Women, even in educated families, are often taught to prioritize everyone’s needs over their health since their childhood. The onus of responsibilities and these gender stereotypes prevent them most of the time to pay attention to their well being. They often keep silent about their health issues.

Patriarchy plays a major role in the poor health of women of all ages. Girls in rural and suburban parts of the country are married off at an early age, and once they fulfill their purpose of giving birth to children, suddenly they and their health are not important to anyone. This patriarchal structure of society leaves a very negative impact on the minds of women regarding their position of less importance in the family. Once they start feeling inferior, they hesitate to speak about their health issues as well.

Undernutrition and obesity in women co-exist in India

Although malnourishment and gender bias in access to healthcare among women is widespread in India, even as the prevalence of obese girls and women is increasing at a fast pace especially among urban, educated and wealthier families, a recent study has found.

While Indian women don’t get the right to meet their daily nutritional needs, the recognition of the increasing population of over-nutrition, overweight women is astonishing across the country. And this problem is not only prevalent among the urban and educated sections of the society, but the over nutrition is also rising even among women and girls living in rural areas, and belonging to the uneducated and poorer households.

The prime cause of both problems (overnutrition and undernutrition in women) is their vulnerability to all forms of malnutrition and micronutrient deficiencies. The unhealthy diets, lifestyle, and behaviors result in gaining unhealthy weight, diabetes, cardiovascular and other serious diseases.

In rural areas and poor families, women are not educated enough about the diverse diet they should take. Women’s health rules say that women need fewer calories and more nutrition, but most women often end up taking more bad calories from edible oils, sweeteners and other junk foods which contributes to developing obesity in them. The excess of bad calories and less nutrition make them obese and unhealthy.

Women have special nutritional needs as compared to men because of their different roles as conceivers, breastfeeders and child bearers. During the time of menstrual periods, their body tends to require specific nutrition.

According to researchers, the Indian education system does not prepare women to tackle their various health needs. Most of the time they do not eat as per their body composition. In general, they need to consume around 1,200 calories per day fewer as compared to men. For this matter, a woman should pack their calories with a lot of nutrition.

In contrast, most women in India (both in urban and rural) derive higher calories from foods that are less nutritious. This is because of the common belief in India that eating ghee and other oily foods would make them stronger.

During and after pregnancy, they are supposed to consult a dietician and get a proper diet plan, but do not do this. Most of the time, it is due to the shortage of healthcare in small towns and villages. But even if this healthcare is available, families, and even women themselves do not avail of it for the fear of spending on travel expenses and high fees of hospitals.

A little self-care and awareness can help

The Indian government has made efforts to alleviate gender discrimination and provide healthcare access to women, but lack of proper implementation is still a roadblock even though more awareness about nutritional practices and the healthcare facilities may help improve the women’s health condition in India.

Since ages, women have been kept deprived of getting medical facilities for various reasons such as unavailability of female health care providers, gender bias, geographic bias, mindsets, patriarchal society. I have seen my mother overlooking her health for family responsibility. She usually did not seek medical help for her health issues until someone noticed it and get her to the doctor.

But isn’t it a high time women should take charge of improving their wellbeing by themselves? Whether it’s your mental health, menstrual health, or physical health, isn’t it your responsibility too to take good care of yourself? If you don’t overlook your responsibilities towards your family, husband, and children, even if none gives you the credit, then why do you need to get approval for your health rights from them?

A little self-care can do much. A common protective factor for both kinds of undernutrition is a better quality of diverse diets. Give proper nutrition to your body, make yourself aware of what is good for your health. Educate yourself about your nutritional needs. Raise your voices to speak about your health issue. 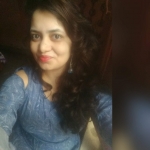 Srishti is a mental health and wellness blogger at TrendToFit. Her articles about fitness, wellness,

Give Me My Due – As A Homemaker, I Refuse To Work For The Peanuts You Toss Me!