On 18th of October, 2019, astronauts Christina Koch and Jessica Meir became the first two women to complete a spacewalk together, an inspiration to future generations, and also a tribute to all who have come before them.

Providing guidance to the astronauts from Mission Control was another woman — astronaut Stephanie Wilson, who has spent 42 days in space over 3 spaceflights.

Whether one would call today’s spacewalk an ‘all-female’ spacewalk, depends on how nitpicky one wants to be.

As Mary Robinette Kowal, author of the award winning and highly acclaimed Lady Astronaut series puts it, two women may be performing the spacewalk, but the crew assisting them from inside the ISS were men (Luca Parmitano was the robotic arm driver for this spacewalk).

There is no denying however, that it was a historic moment.

The astronauts began the space walk outside the International Space Station at about 7:50 a.m. to make an urgent repair to its power system. They concluded the spacewalk 7 hours and 17 minutes later, just before 3 p.m.

They successfully completed their mission — replacing faulty battery charge/discharge unit (BCDU) that failed to activate earlier this month when new lithium-ion batteries were installed on the station’s exterior. In fact, when asked if they could continue working, they responded with a “yes” and extended their scheduled five and a half hour walk to a total of seven hours and seventeen minutes, completing some ‘get ahead’ tasks as well. 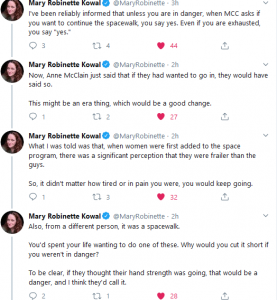 Why is this event important?

President Donald Trump spoke to the astronauts during their space walk. It’s the first time since the 1969 moon landing that a sitting president spoke directly to astronauts who were physically outside of a spacecraft in space, according to the White House.

President Trump, of course, did not have his facts right, and said that they were, “This is the first time for a woman outside of the space station.” This is untrue, because the first woman went outside of a space station in 1984. Meir politely corrected him, saying, “First of all, we don’t want to take too much credit, because there have been many other female spacewalkers before us,” she said. “This is just the first time there have been two women outside at the same time.”

She further responded to his comment that Koch and she were “brave people” by saying that it was just their job. “”It’s something we’ve been training for six years,” she said.”For us, it’s just coming out here and doing our job today. We were the crew that was tasked with this assignment.”

At the same time, she acknowledged the importance of the spacewalk, saying “we recognize that it is a historic achievement and we do of course want to give credit for all those who came before us. There has been a long line of female scientists, explorers, engineers and astronauts and we have followed in their footsteps to get us where we are today.”

She hoped that they inspired everyone who had a dream, not just women, “To everybody that has a dream, that has a big dream and that is willing to work hard to make that dream come true, something that all of us that have made our way up here have done all throughout our lives. And I can tell you, the hard work certainly did pay off.”

“In the past, women haven’t always been at the table”

In an earlier interview on NASA TV, Koch answered a question about their accomplishments are viewed in terms of being female, thus, “In the end, I do think it’s important because of the historical nature of what we’re doing and in the past, women haven’t always been at the table. And it’s wonderful to be contributing to the human spaceflight program at a time when all contributions are being accepted, when everyone has a role, and that in turn can lead to an increased chance for success. There are a lot of people that derive motivation from inspiring stories from people that look like them and I think it’s an important aspect of the story to tell.”

The all-female spacewalk was first scheduled for March this year, but had to be cancelled because for the simple reason that there were not enough spacesuits available in a particular size. Following the heavy criticism directed at NASA for this, they have since confirmed that the International Space Station is now equipped to make four complete spacewalking suits, with two HUT (hard upper torso) components of the same size to be available at any time.

The other reason why this spacewalk is significant is because it is an important milestone in NASA’s attempt to put the first woman on the moon by 2024 with their Artemis program.

Today's #AllWomanSpacewalk is a milestone worth noting & celebrating as we look forward to putting the first woman and the next man on the Moon by 2024 with our #Artemis program. Tune in to see @Astro_Christina & @Astro_Jessica work in the vacuum of space: https://t.co/2SIb9YFKsH

The optimist in me cannot help but hope that she will be a woman of colour.

Why Isn’t There A Single Fast In Indian Culture For The Long Life Of Daughters Or Their Safety?