Kahan Hum Kahan Tum Is A Breath Of Fresh Air From Saas-Bahu Dramas!

If you’re tired of watching saas-bahu dramas, there is a new soap in town! Kahan Hum Kahan Tum breaks stereotypes, one episode at a time!

Recently, I came across a few articles that talked about how women are not allowed to carry the Ganesh idol during Ganesh Utsav. It was rather saddening to read that on the one hand, we are trying to communicate with Chandrayaan’s lander Vikram. And on the other, we are still reading about gender discrimination.

And there is the Hindi TV, we all love to watch, despite claiming that we don’t! When the Friday episode ends with a cliff-hanger, we are eager and excited to see what unfolds next week. Saas-bahu dramas, misunderstandings, re-births, tragedies and what not, we watch each activity glued to our TV screens.

In such a time, Star Plus’ serial Kahan Hum Kahan Tum is like a breath of fresh air. It is a no-nonsense daily show with no cunning saas, no conspiring bahu and no plastic surgeries (so far).

Moreover, Kahan Hum Kahan Tum subtly breaks a lot of stereotypes of our society. Before that, let me give you a brief of the characters:

The protagonist  of Kahan Hum Kahan Tum, Sonakshi is an independent TV personality (in fact, she is a TV actress acting in one of those saas-bahu soaps). She knows how to gather herself and move on from a bitter past.

The male protagonist Rohit is a heart surgeon. He, too, has a bitter past and hasn’t been able to move on.

Men can cry too!

Men can cry, can’t they? They, too, have emotions which sometimes are too complex to handle. Some times they are the ones who need a shoulder too!

The heroine saves her man

Rohit gets himself in a mess quite often. He tries to contact his ex but in vain. He then gets drunk and roams on the streets. On the same night, Sonakshi escapes a scandal all because of her quick thinking.

In such a situation, viewers would expect the ‘hero’ to save the woman and get her out of the trap. But, in fact, it was the ‘heroine’ who saved a wandering man from the streets.

And now coming to the Ganesh utsav. It was Sonakshi who carried the Ganesh idol for sthaapna before her brother did. In fact, she even played the drums on the occasion of Ganesh Visarjan. 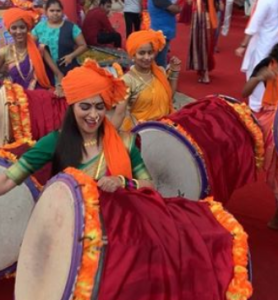 And the most beautiful part is, this serial never talks about gender equality or anyone going on a naari morcha. They include these things into their story without focusing on any social issue we are fighting.

Do we still think all serials are backward?

Why don’t we just learn from the little things some serials teach us in the most subtle way? 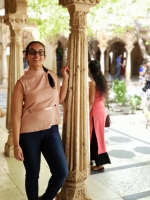