The Perfect Backdrop For Her Dream

Her lips curved into a smile when it dawned on her that she had indeed fallen for him. And he is the one she wanted to be with.

Everybody including her waited for the update on the website. Anytime soon, somebody in a group, a little away from her, mentioned. None around her seemed to concentrate on their work as the news about the promotion was to be declared.

She twisted her wrist to get another look at her watch. 5.51 pm. She had to collect some books from the library while on her way back to her home, she reminded herself. Her eyes fell on him who seemed to be engrossed in his work. Was he really working? She wasn’t sure.

He had stared at her, had fixed her with his steady gaze he never knew would sweep her off her feet. And his actions in all the ways were clear that he was interested in her. His genuine concern about her was gradually moving her closer to him. Glancing down at her phone, as she stole another look at his chiseled features, she skipped her heartbeat. His kind gestures added elegance to his handsome built. How could she even pretend to ignore him sitting right next to his cubicle, she wondered.

Her lips curved into a smile when it dawned on her that she had indeed fallen for him. And he is the one she wanted to be with.

The scream brought in some commotion and then silence followed for a while. Each one busy checking their emails. And there her email popped up the new message. She was promoted. Things were in her favor.

Turning towards him, she smiled. The glow on her face did not go unnoticed by him. He understood that she is aware of his feelings for her. Amidst the chaos around, the two hearts were in sync, beating for each other, ready for a commitment.

Her pulse raced as she waited for his answer.

How would my life be with him? How would he react after I confess my love to him? Thoughts gushed.

Came in with a loud yawn and stretch.

Wasn’t it a coffee? Or Tea? Her half woken self struggled to realize that it was her dream. As believable as it felt, it was unreal.

Two pair of eyes stared at her pleading for the morning tea, as she opened her eyes. Wishing the dream wouldn’t have ended and could have continued a little more, she turned her side and smiled at her silly self. Oh, she smiled! A genuine smile! And the fluttery heartbeats!? The newness she sensed was a welcome change in her boring routine.

Basking in the warmth of the unfeigned emotions, she chose to lay in her bed for some time trying to unfold what had been holding her uptight depriving her of the feelings she was experiencing at the moment.

What have I turned into? Who am I? She questioned herself.

Tasting her the flavors, life passed by her, snatching her from herself and she, aware though, had become a silent spectator to the ever-fleeting moments.

I am what I am, she answered making peace with her self. The dream became a perfect backdrop for the impending day as she readied herself to tend to the needs of her family. 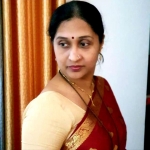 A mother, a wife and a woman defines me. I became a homemaker by choice