With more than 460 million internet users in the country and with real safety concerns, we need to understand what internet governance means. Ananya, India’s NextGen Fellow, explains.

Hi, I’m a 19 year-old girl living and studying in India – a country that has witnessed a sea wave of change in the global internet users’ atlas in the recent years.

Internet and what it means

Although the conventional and technical definition might say that the internet refers to a global network of interconnected computers/networks, in the recent times, for women especially, the internet has meant ’emancipation, education, enlightenment, employment, and entertainment’.

It is a port to ship & sail ideas and movements, campaigns and commitments, thoughts and actions – a channel through which the world that until now was hidden and silent for suppressed and under-confident women, to explore a little more about themselves while also being in fascination of their ‘yet to be explored’ facets.

The internet, thus, connects not only computers, but also women’s low-pitched voices to their high-pitched revolutionary ideas. There couldn’t have been a greater gift and a better scientific advent than the internet!

But what I’ve always been curious about is – how does the internet work? Who owns it? Who rules it?

In a rapidly evolving internet-reliant and internet-addicted world, it is important to understand how the internet should be governed in order to make its access universal, unconstrained, and unconditional.

These are what drew me to the arena of internet governance (IG). I made a very humble debut as a member of the Delhi Chapter of the Internet Society in 2018 and somehow managed to grab the opportunity to participate in a variety of Internet Governance-related programs. One such program was [email protected], Paris in 2018.

I was elated when I found out that I’d been selected for the 2nd Phase Evaluation for YIGF. It was during this that one of the mentors, Mr. Muhammad Adan Abid, encouraged me to apply for ICANN64 meeting. While I applied I never thought I would really get selected for something as big, bright, and brilliant as an ICANN meeting.

My experience at ICANN64

But in November 2018, an email from Ms. Deborah Escalera wiped away all my fears and doubts. An email that lifted my spirits as it informed me that I’d been invited to be a part of ICANN64 in Kobe, Japan.

And in March 2019, at 19, I, probably was, the youngest person in the crowd, as I stepped into the spellbindingly spectacular Hall of the magnificent Kobe Portopia Hotel as a NextGen representative of India. 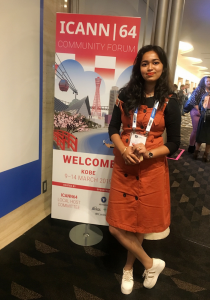 When the meeting was inaugurated, in the first hour of the meeting, I was extremely afraid and apprehensive. I didn’t know if I fit in. But I was kept highly motivated by all the participants – my questions or points were never discarded because I was young and still lacked experience.

This was the best thing about ICANN meetings – they didn’t count your experience in years, but in insights. I became friends with people almost thrice my age and had absolutely intelligent exchanges of ideas with people who were moguls and magnates in their respective fields.

And it was during one of my exchanges with the supremely intellectual crowd at ICANN that an idea hit my mind – Project Safe In Surfing (SIS) – to incorporate a compulsory Skills Enhancement Course (SEC) on Digital Defence Techniques (DDT) for young girls in the school and university curricula throughout India.

It will redesign the cyberspace as a sandbox for secured and smart web-surfing for young girls, assisting them to become “informed digital citizens”. Project SIS will encompass a cyber clinic to diagnose the online threats challenging young girls and a cyber crèche to impart digital defence/rights training to young girls.

Project SIS will render the role of a sister – that of being a friend, a counsellor and a guide to her siblings.

But this idea that took birth during an ICANN meeting could metamorphose only after I got selected as a Young Fellow for the She Creates Change 5.0. There were over 3000 applications from all over India and I’m glad to have been chosen as ‘the one who can create change’. This program is sponsored and hosted by the Change.org Foundation, and requires the fellow to be a part of their Lab for one long year to develop their projects.

Why is this project important?

This is the 21st century, and dangers are no longer just on-ground; they’re online too!

This campaign idea and its task come at a time when more women are going online. The National Commission for Women witnessed a surge in cyber crime related complaints registered at the Commission in the past three years.

Plus, the Indian Prime Minister has been particularly vocal about his vision of manifesting ‘Digital India’. So, this makes it inherently important to ensure that women become equally active participants in our fast growing digital economy.

In 2018, Facebook entered into a partnership with National Commission for Women (NCW) to launch a digital literacy programme aimed at training 60,000 women in universities across major cities on differentiating between credible and questionable information. These included cities in Haryana, Delhi-NCR, Manipur, Sikkim, Meghalaya, Maharashtra, and Tamil Nadu.

However the loopholes here are glaring –

Google joins in for internet safety

In 2017, Google enthusiastically started talks with 4-5 states in India (for example, Goa) to introduce internet safety as a part of the syllabus.

Just like Facebook, Google too limited its approach and coverage to one particular state, thus, limiting its impacts and benefits. Additionally, there was no credible data confirming if the program was actually implemented in all the schools and if it benefited all the students.

Indian education systems not yet clued in

We are in 2019, quickly evolving towards a digital economy. But while the CBSE and CBCS system (recommended by UGC, India) offer courses in Financial Literacy, none of them seem to have emphasised or put forth any effort to introduce ‘Digital Literacy and Digital Rights’ as a part of syllabus.

You might counter-argue that CBSE offers ‘computer science’ as a subject to its students starting from class 4.

But the question is – “what is included in the curriculum”?

Teaching a student “this is a mouse and that’s the keyboard, this is oracle and that’s how you write in a Microsoft office word file” DOES NOT arm a student to survive and fight back cyber bullying, stalking, picture morphing, and online harassment of any sort.

Laptops given to students; what to do with them?

Almost all state governments in India are known for giving laptops to bright students (with special consideration for girl students). But what is the use of a computer/laptop, if they don’t know how to use it and/or they don’t feel safe using it?

Best time for this discussion

And now since the National Education Policy is already being debated, what could be a better time to pitch in the need of a “Digital Literacy and Digital Rights” course for women (the most vulnerable in and the least aware about the cyber world) in particular?

The internet is going to be a pillar of future societies

Although we all go around talking, writing, discussing, and campaigning a good lot for the realisation of the Sustainable Development Goals, in reality we’ve failed to infiltrate/relate the ‘noble idea’ and its essence to the future level stakeholders of the society by ignoring a very important pillar of our future economy and future world – the internet. How can we even imagine something sustainable without involving the ‘future base of our everything’ – the internet – in it?

CANNOT be attained and/or will remain infeasible in the long run if the internet is not governed with proper care.

What the HRD ministry needs to do about it

Therefore, it’s high time that the Ministry of Human Resources Development of India takes ‘Gendered Internet Governance’ seriously and not only considers but also implements a nation-wide policy to impart Digital Defence Techniques and Digital Rights as a compulsory and gradable part of the syllabus in all the educational institutions of India.

Making it compulsory and gradable will make students pursue it seriously and thus, derive some actual ideas about Internet Governance. This will pave way for the long neglected and almost absent issue of internet governance and women’s online space and cyber entitlements in the policy debates and public discourses of the world’s largest democracy – India. A small step could ACTUALLY lead to landmark legislations.

How it will impact people worldwide

I’m glad that my involvement in this crucial issue will not be limited to only India and/or Japan but also to Russia because I’ll be representing India and the students’ community in Vladivostok, Russia as a Fellow for the Asia Pacific regional Internet Governance Forum (APrIGF) 2019.

And I must mention that none of this ideation, creation, or negotiation would’ve been possible without ICANN. It’s the body that transformed the way I used to view the internet.

How it helped me understand internet

It further helped me develop my understanding of the internet and its ecosystem while improving my comprehension of the current global Internet Governance issues. It also helped expand my interaction and engagement with the broader Internet Governance community.

Thus, helping me deliver more meaningful impacts at the local, regional and global levels (where I represented my country/organisation). It also gave me the confidence to speak up at regional and international fora.

Now, when I look at the internet – I view it as a ‘common resource’ that must be both affordable and accessible to all, regardless of disparities in region, religion, race, etc.

And as an economist-in-making, I strongly opine that the internet is in fact “the most non-discriminatory, non-exclusive, non-rivalrous commodity” on Earth which we “all” must take maximum advantage of to pursue “our” collective vision and mission of creating a stable, scientific, and strong world. 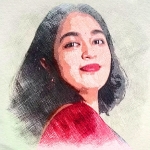 The Other Gender Gap: We Need To Talk About The Digital Divide

The Tiktok Ban Points To A Larger Issue: How Do We Ensure Teen Safety Online?