Women entrepreneurs in India believe strongly in the power of female communities and mentors. The new Women's Web survey has many such insights for you.

Women entrepreneurs in India believe strongly in the power of female communities and mentors. The new Women’s Web survey has many such insights for you.

If the fundamental definition of an innovative entrepreneur is someone who identifies a problem and solves it in a better/faster/cheaper way, then one cannot ignore the element of risk involved.

The reality is that most entrepreneurs need to take on some level of risk, whether it is that of wrong assessment of a market problem, shifting technologies or changing customer needs and preferences. Perhaps due to this risk element, even until recently, entrepreneurship was considered a man’s arena. Women who ran businesses, were considered as useful contributors to the household income, but not really true entrepreneurs.

All this is changing today.

According to the Sixth Economic Census released by the Ministry of Statistics and Programme Implementation, women constitute around 14% of the total entrepreneur base in India i.e. 8.05 million out of the total 58.5 million entrepreneurs. While some are accidental entrepreneurs due to the lack of other work opportunities, many others are driven by a specific mission or goal.

The average employment in women-owned enterprises is only 1.67 people per business.

The majority entrepreneurs that we surveyed had started their businesses between the ages of 25 and 35. 51.2% of women fall under this criteria. Another 19.6% of women started their business between the ages of 35-40. This leads us to infer that a majority of urban women entrepreneurs do have some work experience before starting their own ventures. Only a small number (11%) had started before turning 25, some possibly very soon after finishing their education. A similiar response was also seen on the question of education. Around 72% of women who answered the survey are post graduates. 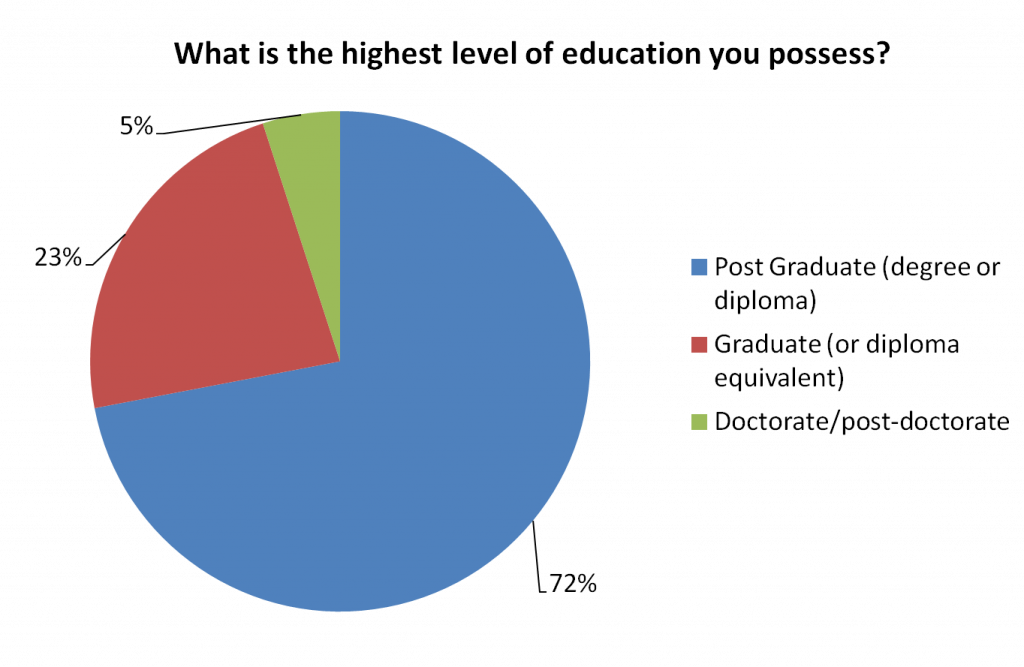 The largest number of women took the survey were based in Mumbai (30%) while the NCR region and Bangalore accounted for 15% each. Among all the metropolitan cities Chennai had the lowest turnout in the survey with around 3%. 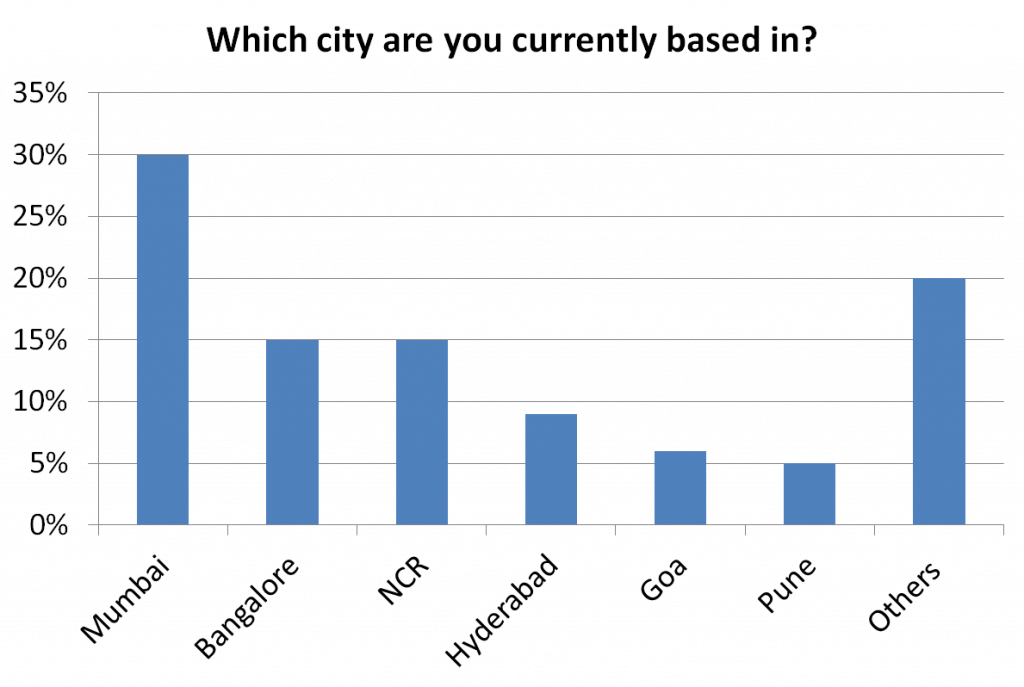 Industry wise, the largest segment of women entrepreneurs (16%) belong to the Creative Services category (Writing/Design etc). The second and third position is held by Health & allied and Apparel & accessories respectively. Apart from that about 30% belong to the other sector which includes Travel and tourism, Manufacturing etc. The largest chunk of women entrepreneurs belonging to the creative services field is possibly because this sector has relatively low entry barriers – these are professionals capitalising on an existing skill they have or one they have acquired, and does not need significant capital besides a computer and a mobile/Internet connection for the most part. On the category of business size measured by the criteria of Revenues and No.of employees, the majority of women-owned businesses were likely to be micro-enterprises or small businesses, with 68.5% reporting a revenue of under Rs.10,00,000 (Rs. 10 Lakh or 1 Million) in the last financial year. Another 23.7% reported revenues of between Rs.10,00,000 and Rs.50,00,000 (Between Rs.10 Lakh and Rs.50 Lakh/Between Rs. 1 million and 5 million). In accordance with these revenue findings, a majority of enterprises that is 90.2% had under 10 employees in their firm. It is important to note that while some women build large and scaleable businesses, many more are in the micro-business area, and need support of a different kind than start-ups would; for e.g. raising funds from investors is not usually a concern for micro business owners, but smart working capital management could be a priority. The scope of becoming more creative is what drove most women (27%) to start their own business. 20% were inspired by the feeling of being one’s own boss and another 18% started due to the presence of a specific idea that they wanted to take to market. 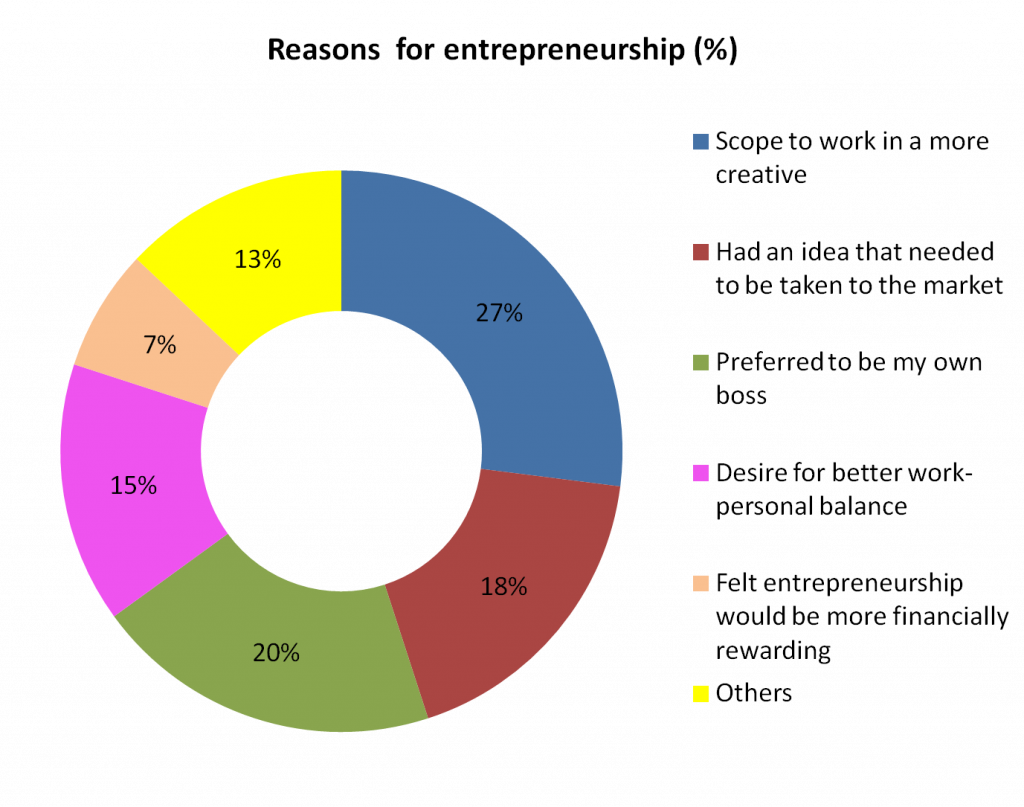 Start-up capital for the business

In the majority of cases women entrepreneurs (91%) used personal funds and savings as the source to start their business. This ties in with the fact that the majority of women are micro and small business owners. 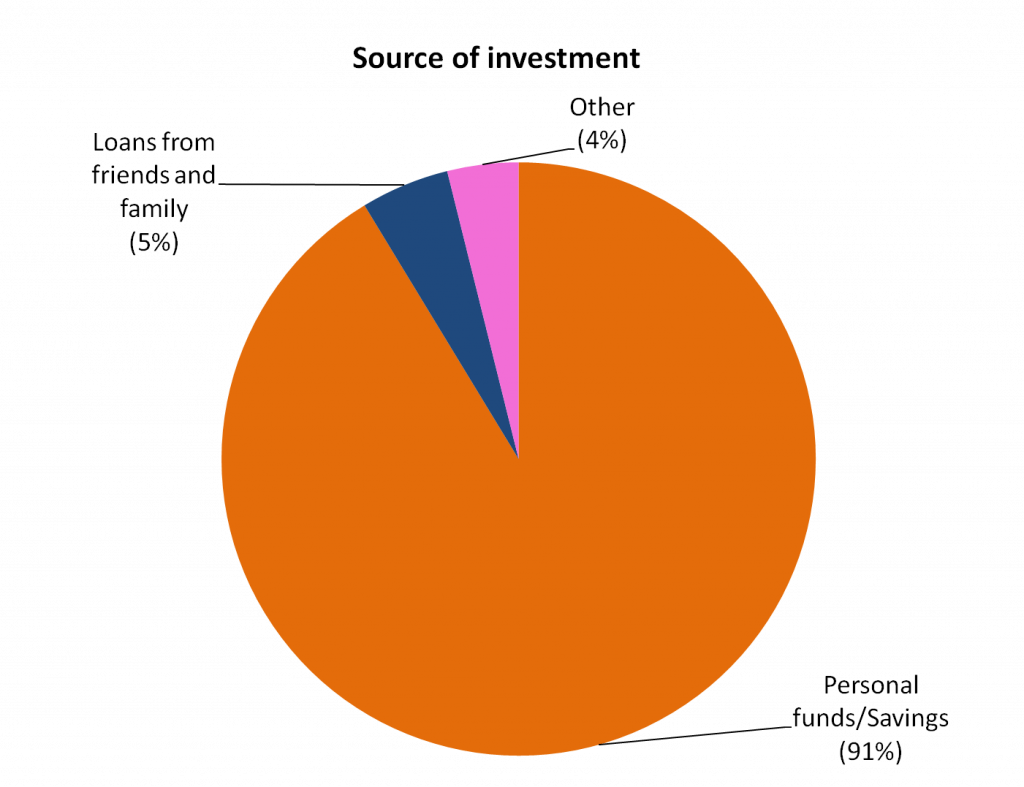 While when it comes to Key Challenges at present majority of women entrepreneurs choose Financial and Marketing related challenges (28 and 26% respectively). In multiple researches too, most small business owners cite cash flow management, growing the business to a medium sized business, and acquiring consistent new customers are the major challenges, and these are no different for women entrepreneurs in India. When asked about what were the things that would aid them in achieving their major goals in next 3 years then most of them ( 18%) responded by selecting scaling up and better marketing skills and support.

While ‘scale’ may be relative, it is clear that most women entrepreneurs need better marketing skills such as better go to market strategies, stronger customer retention skills, and digital marketing and data management skills. 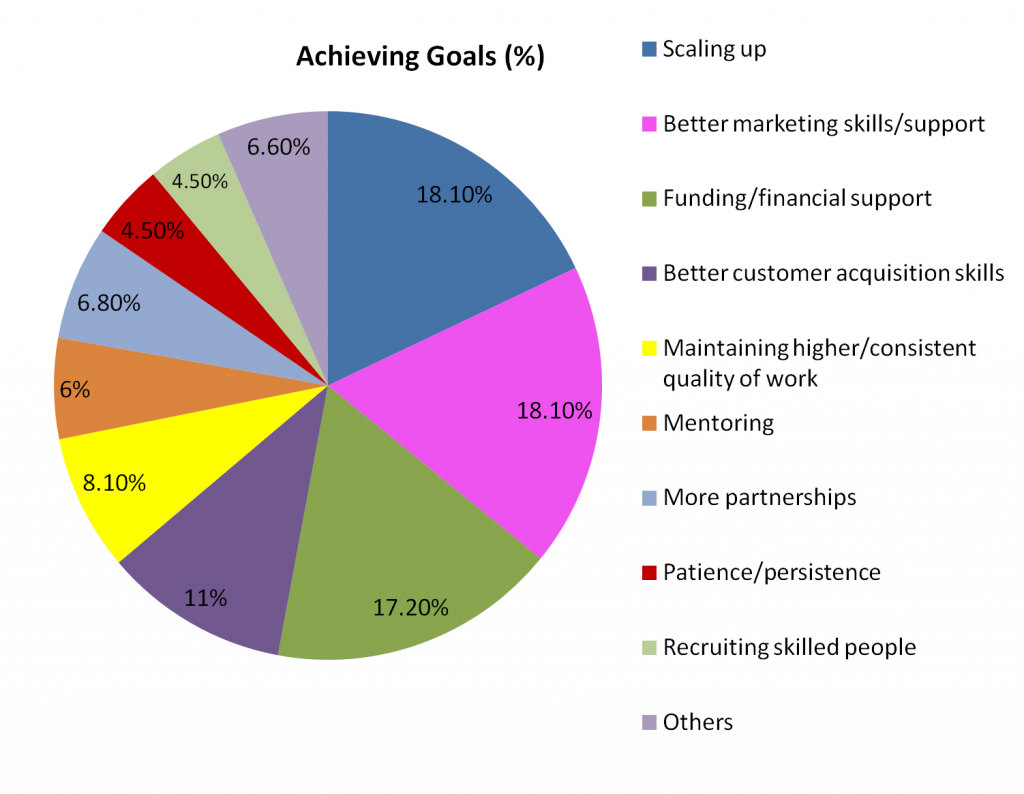 How gender impacts their work

In this particular survey, we also asked women entrepreneurs some crucial questions regarding the social environment in the workplace in India. 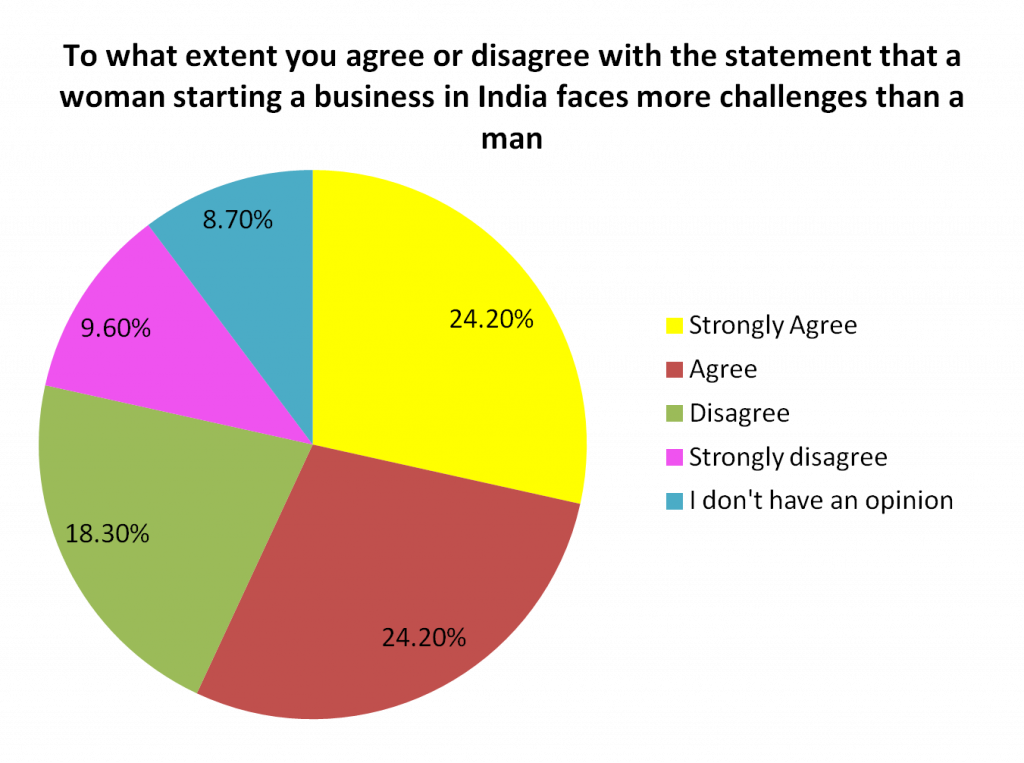 When asked about that how much do you agree that a women starting business in India faces more challenge than a man then around 49% women strongly agreed agreed with this statement – this illustrates that women do perceive gender as an important factor that adds to the challenges that they face. 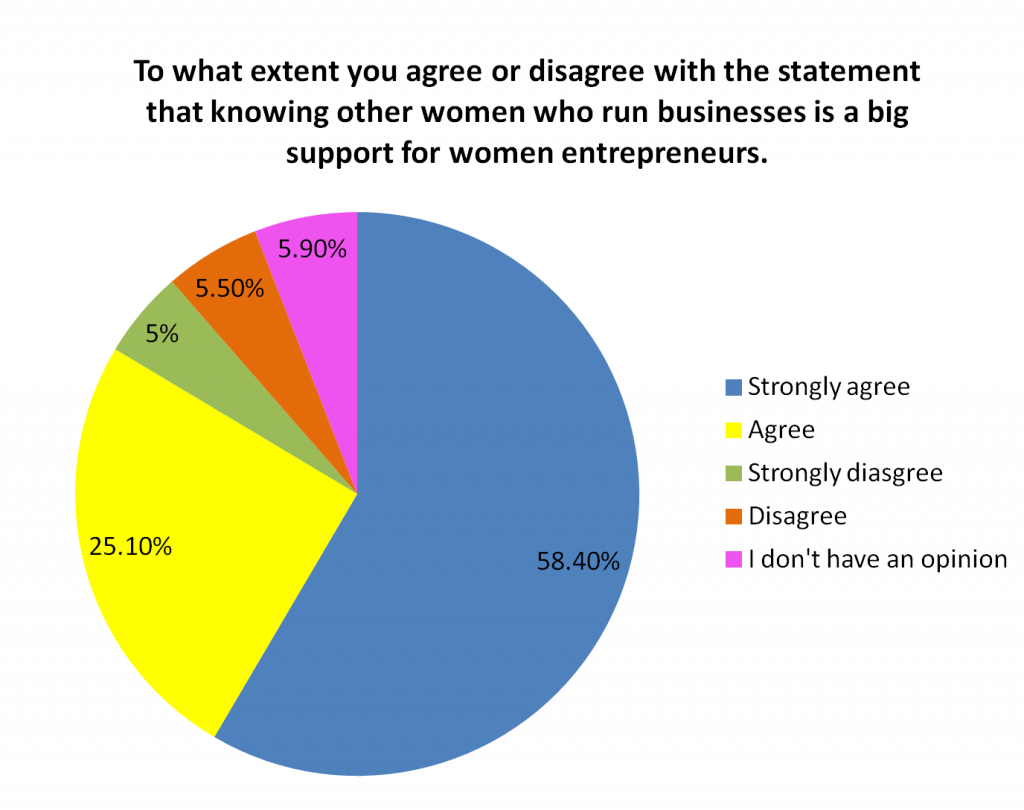 About 58.4% women strongly agreed and another 25.10% agreed to the statement that knowing other women who run business acts as big support for emerging women entrepreneurs. This clearly smashes the very stereotypical notion that women don’t support each other. Given that work life challenges disproportionately impact women, knowing other women entrepreneurs helps women navigate such challenges better. It also gives them the inspiration and reassurance to do better and aim higher. 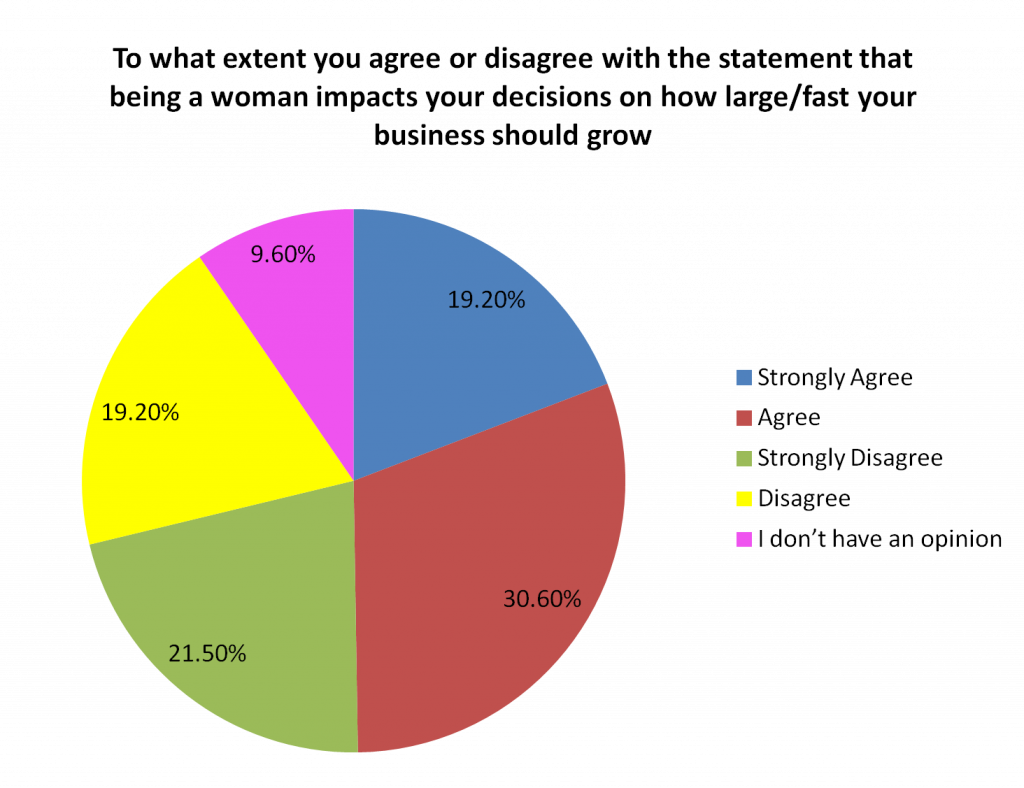 When asked that does being a woman impacts the growth of your business then about 52% women surveyed either strongly agreed or agreed to this statement. This makes us ponder upon the gender imbalance that still prevails in our country.

One reason for many women agreeing with this statement could be that since women are still the primary or even sole caregiver in many families, home commitments do not allow them to be more ambitious when it comes to their business. 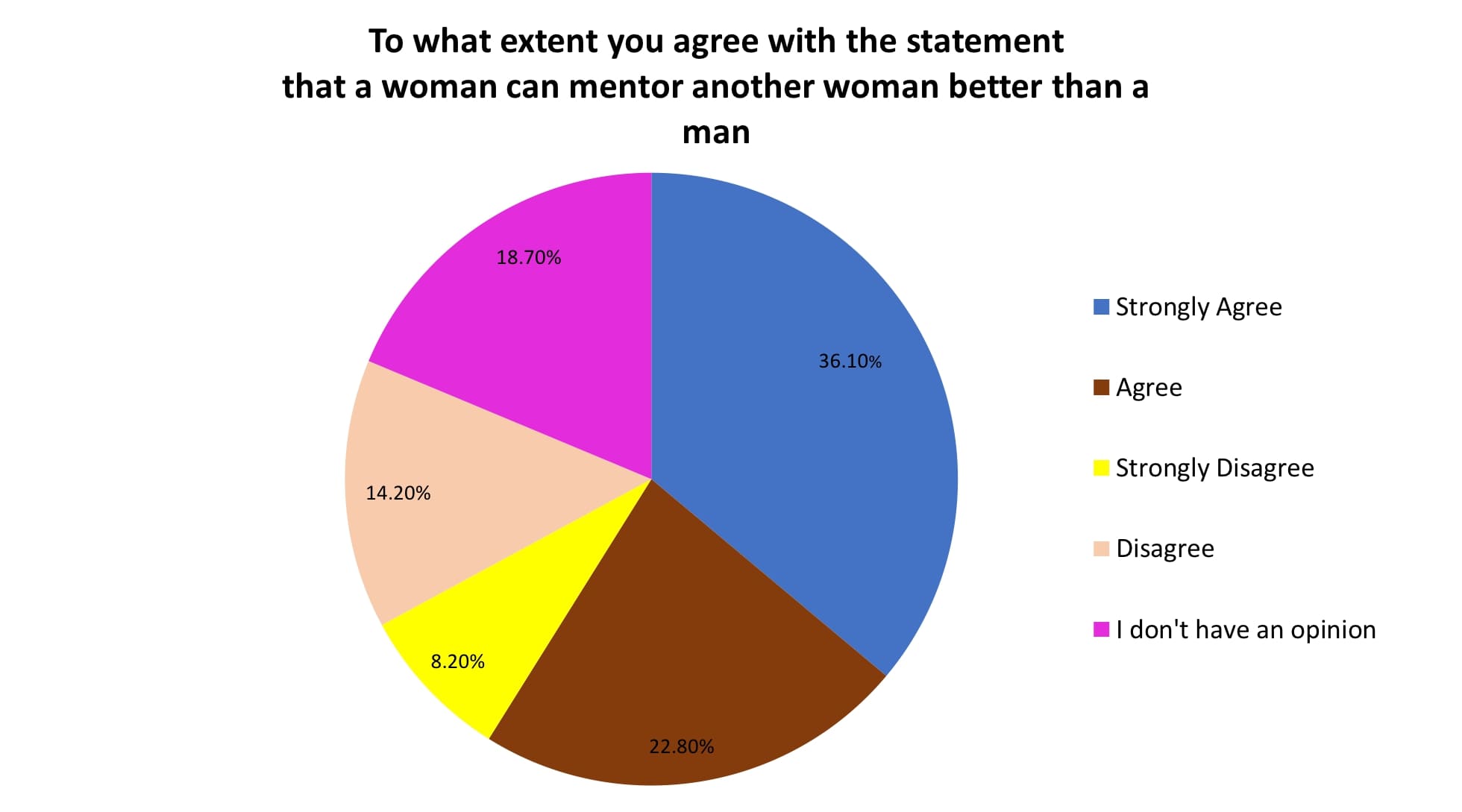 Another question that revealed how much the community of women entrepreneurs matters, was the question, how much do you agree or disagree with the statement that a women can mentor another woman better than a man. A majority of around 58% agreed to this statement.

Women today have stepped out of their comfort zone and are breaking barriers all around the world.

The Women Entrepreneurs in India 2019 Survey reveals the many challenges that women entrepreneurs are grappling with, as well as what drives them, and what else they need in order to flourish.