Marriages have always been 'mandatory' in our culture, but singlehood is so much better than living in an abusive or even loveless marriage!

Marriages have always been ‘mandatory’ in our culture, but singlehood is so much better than living in an abusive or even loveless marriage!

The stereotypical Indian mindset: No grown up ‘girl’ – no matter how educated she is, no matter that she occupies a plump post with a large salary – is  considered “safely, securely and happily settled” in  life and society unless she “ties the knot”.

In earlier times most young girls were virtually considered inert objects, ones that were to be “seen and not heard” by the elders in the family. Like domestic livestock, they would be untied from one tether, and tied to a new tether. This basically summed up their lives.

Owing to the lack of economic independence and education, the only option for women was getting married. So, demurely, they accepted what fell to their lot. Marriage in those days was for keeps, because it was an era of  idealism and lofty human values. Once married, a couple was expected to lead a harmonious life till death parted them.

The times, they are changing; and yet the bulk of Indian parents continue to cling to the old idea of  marriage being the summum bonum (Roman expression for the highest good) of  a woman’s life. Such parents’ idée fixee (fixed idea) is that marriage guarantees a woman a healthy sex life (sex being a taboo for single youth), food-shelter-economic stability, social status (that she is somebody’s spouse) and above all, the climactic experience of motherhood (Women à la Kunti from the Mahabharata are abhorred).

Ponder this: If marriage guarantees lasting happiness and stability then why are dowry deaths, suicides by young wives, estrangements, dysfunctional marriages and divorces on the rise? Social norms invariably blame the women. But isn’t there more to it than meets the eye?

Happily ever after, or not?

My maid Jaya lives with her four sons and husband who is a car-cleaner-cum-driver. A diehard tippler, he blows up all his earnings to buy liquor.  When short of cash he extracts money from the hapless woman. Is Jaya happily settled in wedlock? Some may feel such instances are confined to  the lowest economic rung of society.

But that’s where they are wrong!

Utpala Sarkar’s case is not different. The only child of an affluent lawyer she married Kamal Sarkar without her papa’s blessings. Consequently he cut her off without a penny. Five years into their marriage Kamal lost his job as a salesman. They were already parents of a girl. They survived because of Utpala’s job as an economics lecturer at a central university.

To cut a long story short Kamal never found a job again. Frustrated and dejected he began sponging on his wife for his regular quota of liquor and cigarettes. When inebriated he would regularly thrash and foul mouth the poor woman.

Post retirement Utpala invested her terminal benefits as well as  her jewellery to buy an apartment for the family. A year after they moved into the new home Kamal succumbed to cancer.  Blissful matrimony, what?

The guy is a teetotaler and NO, there was no “other woman.” Latha has a gut feeling that her aunt-cum-mother in law who  disliked her, had driven a wedge into their ties. Till date the couple does not share a bedroom, and converses only in public. Sukumaran has been dutiful though: He saw the girls through college and got them married to men  of their choice. To this day, Latha’s aged mother Aishwarya rues her daughter’s loveless marriage. Who could imagine that blood relations could turn adversaries?

Staying married for the sake of it

My cousin Rekha’s story is pathetic. When she  married Anil nearly thirty years ago, all was smooth and they were blessed with a son and a daughter. However things went on a downward spiral when Anil began a quest of spirituality.  He joined a local ashram where a sanyasini (a.k.a mataaji)  became his mentor. After a day’s work he would head to the ashram rather than going home.

The time spent at home was limited. From his wife he sought very little beyond sex. The saving grace was that he catered to the family’s needs:  groceries, children’s educational costs, compulsory savings etc. He even took them on vacations occasionally. Sadly, there was no love lost between the couple.

Battling against all odds, Rekha concentrated on her children, all on her own. Today her daughter works at a multinational company while the son is an MBA aspirant. They lead a lacklustre life spending time under the same roof.

You, me and her

Another cousin Bharati married her brother’s classmate from engineering college. A decade ago, her spouse Agni went to Nigeria on an assignment leaving her with their teenage son.

Soon after, he disappeared, leaving no trace of his whereabouts. Two years later he resurfaced in his hometown. Bharati was shocked to discover that he had a mistress! As of now he has (reportedly) worked out a time sharing arrangement. Happily married, huh?

Who said marriage is sacrosanct?

Now straight from the horse’s  mouth. Two decades ago I entered a negotiated alliance with a software professional. His father was a senior doctor in the railways. The women in the family were ultra orthodox. From the outset they despised my feminist beliefs and outspoken nature.

They nagged and indulged in nitpicking at every step. Since my nature wasn’t malleable as they wanted it, they complained to the husband, provoking him to such a degree that he often beat me up while the rest of the family looked on smugly.

If this is not insult and injustice enough, what is? That I lodged a complaint with the Crime Against Women Cell, is of course another story.

If marriage is genuinely sacrosanct, why do so many women receive such shabby, humiliating, nay, inhuman treatment in their marital homes? Isn’t it ironical that battered, mistreated wives and mothers still crave to get their daughters hitched?

They say, just because we have suffered a bad marriage doesn’t mean our girls will meet with a similar fate. Hoping against hope?

A clarion call to the female Millennials: Marry for all it is worth. If your stars are shining, you might land up with doting in-laws.

If you are moderately lucky, you may escape with mild criticism and a little bullying.

But for Heaven’s sake never advocate matrimony as the ultimate goal of life for women.

The thorns concealed beneath the rose petals on their paths are far too many for comfort.

There is a new option though – if you are highly qualified and pursuing a flourishing career, you could safely give matrimony a miss… for a change! 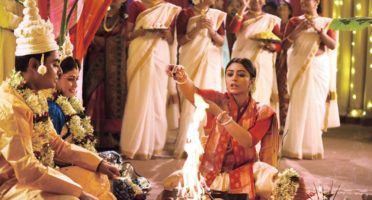