Based on Prayaag Akbar's novel of the same name, Leila, the new Netflix series is set in a dystopian world where misogyny rules and caste matters. (Sounds familiar?)

Based on Prayaag Akbar’s novel of the same name, Leila, the new Netflix series is set in a dystopian world where misogyny rules and caste matters. (Sounds familiar?)

Deepa Mehta is an all-time favourite of many, not only for her films but also for her thought-provoking words and ideas. She is well-known for her Elements trilogy namely, Fire released in 1996, Earth released in 1998 and Water released in 2005.

After a short gap she is back in the limelight as a co-director for Leila, the latest Netflix original series from India which will be aired on Friday, 14th June. This series is all about extremely right-wing ideologies that are prevalent and an oppressive regime that segregates society.

The six-part series is based on Prayaag Akbar’s novel of the same name, which revolves around the search of Shalini Pathak Rizwan (played by Huma Qureshi) for her daughter who was taken away from her years ago. 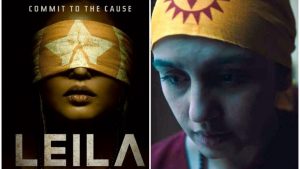 I always adore Mehta’s films for the absolute craftsmanship where she tries to explore women in every situation of life and place them perfectly. Ranging from homosexuality to patriarchy, to communal strife, to misogyny, to ill-treatment of widows, her films have explored women in a most courageous way.

In an interview with the Indian Express, Deepa Mehta says, “It’s boring to have stories of women if they don’t interest everyone. Good stories should touch everyone. Humanitarian stories are far more important than just talking about gender.” She adds, “The novel was picked up by Netflix soon after it came out. They looked around to see who can do justice to its adaptation as a short series and contacted my agent in Los Angeles…This was interesting since I got to set the tone for the series. What is great is that I was an integral part of the casting. For me, that’s extremely important. I fell in love with Huma and the rest is history.” The cast of Leila includes Seema Biswas, Rahul Khanna and Siddharth.

This Netflix original series has a futuristic setting that talks about many current issues including the caste divide, air pollution and water crisis. The series attempts to question the misogynistic practices that women characters are made to go through such as “purity tests” and how they are subjugated.

It will be a jarring series to reveal the disparities in society through its futuristic story telling. As a woman, I yearn for such movies or portrayal of gender misogyny to give women the power to choose – that is where empowerment belongs.