Sharing your past years with your teenagers creates a special bond and makes them share with you their insecurities and fears.

Sharing your past years with your teenagers creates a special bond and makes them share with you their insecurities and fears.

A couple of weeks ago, I took the kids to watch Wonder Park at Metro Cinema in Marine Lines. You can check out the review of the movie here.

But, our fun day did not end there. There was a reason I took them to the other end of the city for a movie, which could be watched much closer to home. Yeah the movie theater experience turned out to be an unexpectedly luxurious surprise, but that’s not why we went so far away.

How I met your father!

Opposite the movie theater is St. Xavier’s college, where their Papa and I had met for the first time. We were in the same class, and ours is a college romance. I wanted to show my girls around the college and tell them a few stories about the early days of our relationship.

My older one is fast approaching her teens. I wanted her to be comfortable telling me about all her confusing and tormenting teenage feelings and I’m hoping that one way to do that is to share that part of my life with her. Besides, as both my girls grow up, I would prefer they go awww, rather than yewww when the romantic relationship between their parents is mentioned. 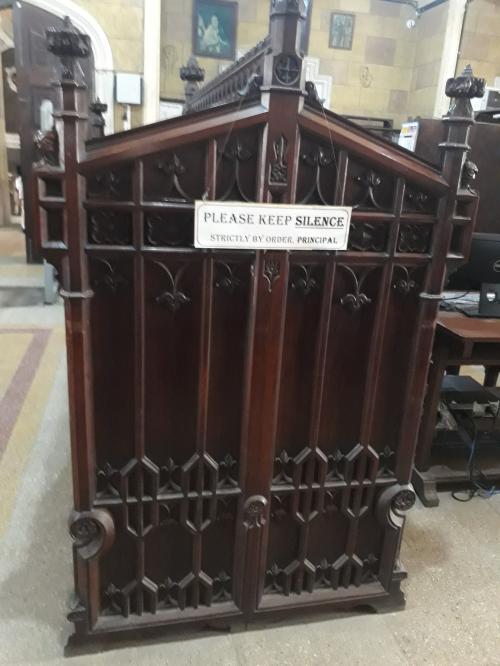 So I showed them the laboratory in which their Papa and I did Physics experiments together, the reading room table at which he explained the prisoner’s dilemma to me, the terrace where he impressed me with his knowledge of tensors, and the canteen where we ate pav bhaji almost every day.

I showed them the balcony at which we first said the three magic words to each other, and told them stories of cutting classes to catch a movie or to go out for ice-creams. There is something about those two century old stone walls that always makes me feel like I am back in those magical, romantic, giddy in love years of my life, and I loved sharing the memories in the appropriate atmosphere with my girls.

Telling my daughter about my teenage years…

I like to tell my older daughter about my own teenage years, in the hope that when she is in her teens, she thinks of me, not as an alien entity from another generation, but as someone who has dealt with the same insecurities and turmoil of emotions that she herself is going through.

Technology may change, and social norms may change, but the basic teenage struggles have stayed the same for generations, and I want her to understand that despite the generation gap, I will be able to empathize with her, and that she can confide in me without embarrassment.

As an added bonus, my older daughter was most intrigued by the Xavier’s campus. The Gothic architecture and the many confusing staircases reminded her of Hogwarts and it made me smile, because when I first read the Harry Potter books about 15 years ago, I had pictured Hogwarts to look somewhat like my old college.

Later I took the girls to a restaurant where their Papa and I had many a special lunch dates.