Rushabh Turakhia, founder of ‘Your Turn Now’ is on a mission to spread kindness in the world. He is also the father of 14 year old Vivaan, an inspiring advocate of Dad’s work.

This dad has pledged to spread kindness in the world, one YTN card at a time!

It was an exquisite boutique bookstore with an enthralling vibe to it. As the bibliophile in me began to scan the array of meticulously arranged books from a distance, my eyes fell on him. With a warm smile and an affable demeanour, he came forward and greeted us.

He was exactly how I had imagined someone like him to be.

We were at a book launch event, and the panel discussion was on. His son was a panelist and also the host of the event – yes, at the age of 14! And if that raises your eyebrows, hold on to your breath.

The topic of discussion was puberty and the teen boy was talking on this subject with confidence and an endearing earnestness amidst a teeming crowd.

That’s Rushabh Turakhia, the inspiring founder of the “Your Turn Now” movement, and 14-year-old Vivaan Turakhia for you! The father-son duo not just left me in awe but also fuelled the curiosity in me to know more about the relationship they share.

If you don’t already know, Your Turn Now is a global kindness movement which was founded by Rushabh a decade ago with the sole purpose to promote kindness, a virtue which though intrinsic to humanity has been dwindling away in this era.

To be a part of this movement, all one needs to do is order the little blue YTN card free of any cost whatsoever and perform a kind deed for someone. The card, which is meant to serve as a reminder, is then passed on to the recipient of the kind act to pay it forward to someone else, thus creating an unremitting chain of kindness.

As of today, 658000+ YTN cards are in circulation in 45 countries, and Rushabh continues to amplify this reach with his undeterred efforts.

How is Vivaan involved in the movement?

While talking to him about fatherhood, the first question that I shot at him straight off the bat was about his son’s involvement in his unique and powerful movement. I was keen to know how someone who is inspiring millions impacts his own child.

Rushabh proudly shared that Vivaan was an excellent host for the book launch of both the editions of the Your Turn Now books. He was 5 years old when the idea of YTN was being contemplated, and Rushabh feels he got the best opinion from Vivaan when he shared the idea with him.

Vivaan has been an integral part of the journey of YTN, and has spread the word by performing various skits based on the stories in the book. When Rushabh was in Leh to conduct kindness workshops in 4 schools, Vivaan would take up a part of the presentation. Rushabh has involved him in every drive he undertook as a part of his philanthropic work to make a difference to the society and Vivaan joined him each time with equal fervour. 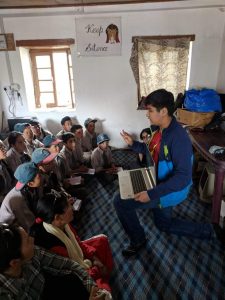 Vivaan conducting a Kindness Workshop at a school in Leh

An interesting anecdote that he narrated during our chat touched my heart.

Once when they were both travelling, Rushabh helped an old lady with her bags at the airport and carried it till her car. Vivaan was quick to remind him that he needs to give her the YTN card to keep the kindness chain going; he always remembers to carry the cards even when he travels alone.

It was heartening for me to learn that Vivaan is called the most helpful and caring child by his school teachers and friends. That says a lot not just about him but also about how his parents have marvellously nurtured him.

On probing for the secret, Rushabh states matter-of-factly, “Vivaan and I share a rapport that is based on mutual understanding.” 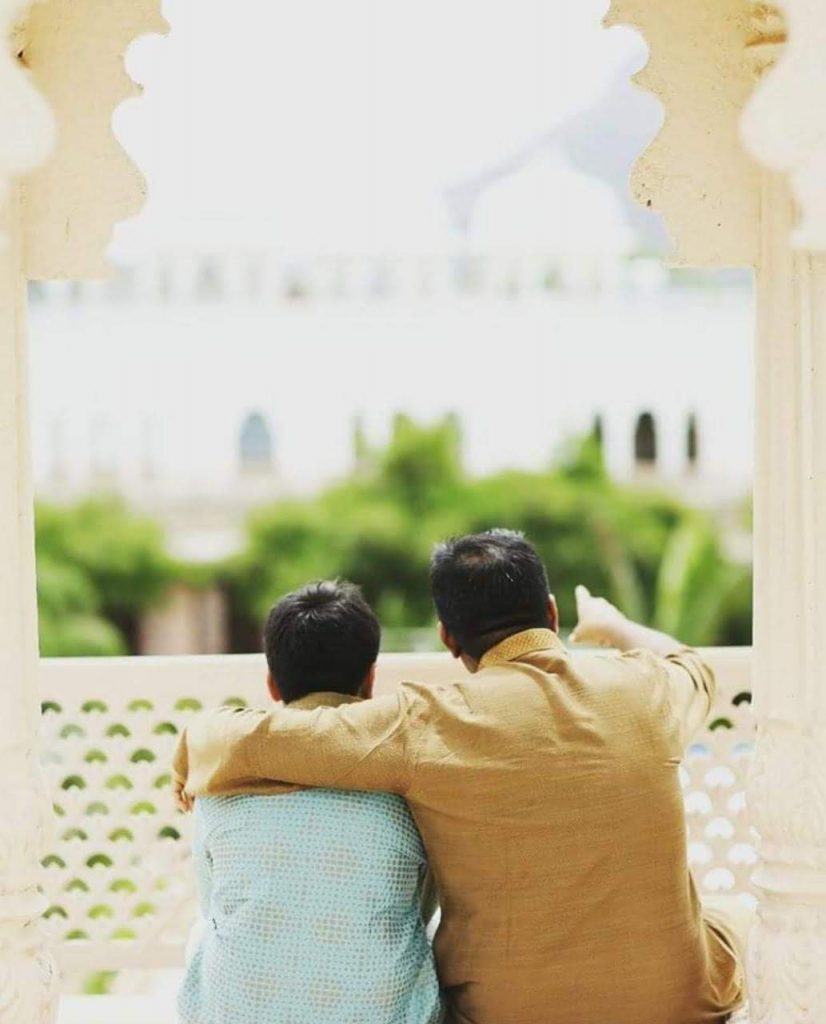 Rushabh Turakhia with his son Vivaan

Right from the beginning, even while he was in the womb, we have tried to inculcate values in him by talking to him about kindness, respect, generosity, loyalty and honesty. We have also read all possible books based on moral values to him during his growing years. We understand that children observe and follow parents more than actually listening to their advice. So, we practice what we preach to set the right examples for him.”

When I steered our conversation towards equal parenting and gender stereotypes, Rushabh’s clarity of thoughts, pragmatism and gender awareness came to the fore.

He accepted that there was a conscious effort from his side to be an equal parent though it did come to him naturally. Being a life coach makes it easier for him to understand others’ perspectives.

“A father’s job is just not to earn money and be the provider. The most precious gift a parent can give to their child is time. Both, my wife who is a teacher at an International school, and I, are hands on parents, and divide responsibilities based on our strengths. We try to spend as much time with Vivaan as possible because we know once kids grow up, they have their own routine and get busy and sooner or later fly away,” he further adds.

Rushabh also revealed that they never perpetuate gender stereotypes at their home.

Cooking and other household chores are considered basic life skills and Vivaan is encouraged to learn it all and contribute. He is a foodie and enjoys baking. He is never stopped from expressing his emotions and is expected to take up responsibilities as now he is a teen, of course under the guidance of his parents.

Rushabh lives his own life with the same values, and agrees that promoting kindness, which is an all encompassing virtue, helps to get rid of the inequalities and biases in our society and teaches us to look beyond our differences and respect others.

On being a father of a teenager

Teenage can be a daunting period for both the parents as well as the child. Rushabh realizes this and keeps the communication channels open with Vivaan. They freely talk about all kinds of topics – be it related to schools or girls or heartbreaks of his friends. 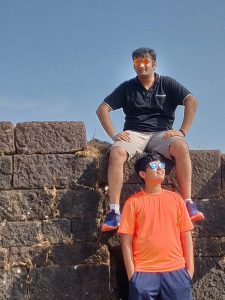 Chilling out with dad

While there is a strong bond tying them, there is also space in the father-son relationship – the space of respect, trust and understanding.

While Vivaan is a lively child, it sure must have been a challenge to initiate conversations on sensitive subjects with him at home.

“Initially, it was a bit uncomfortable for him, but giving him sex education through experts’ guidance helped us to break the ice. We, as parents, have been very open on this topic, as we feel it is better to give right information rather than him learning something incorrect from his peers.”

“I would like to share what happened the other day. I was teaching him Mathematics and gave him a few sums on mensuration. After a while when his mom asked him what he was doing, he said ‘mensuration’ and she heard ‘menstruation’, and we had a good laugh on it!” he explains.

It is pretty evident that this daddy cool has got his parenting right. But he asserts that parenting is not a ‘one size fits all’ thing.

He has always focused on Vivaan’s emotional intelligence and life skills over scoring perfect marks in his examinations. Vivaan is an A+ student because of his hard work and intelligence, with absolutely no pressure to attain a target. In the times of competitive rat race, Rushabh chooses to say “Have fun, be happy” to Vivaan before he leaves home for any test or exam. 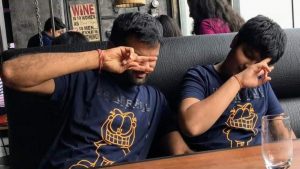 When I ask whether he is always so chilled out, Rushabh confesses, “There have been fleeting moments when I have been annoyed while doing Maths with him, but after all these years it has shown the results. According to me, you are an unsuccessful parent if your child has not hated you at some point in time.”

Kindness in every aspect of life

Exploring Rushabh’s facet as a father made me realize that kindness is in his every muscle and bone and this trickles down to all the roles he plays in his life.

“Vivaan is my personal in-house stylist and over the last few years, all my purchases have happened only after getting a nod from him. We share it all with him – mid life crisis or other issues – and sometimes we get a fresh perspective to that problem. He gave birth to me as a father and often he becomes my guiding light,” he shares.

One interesting advice he gives to Vivaan which has got embedded into my mind too is – “You will be the average of your close five people, so it’s on you to choose what you want to become.”

We all can sure take a leaf or two out of the book of this wonderful family, isn’t it?

Author’s Note: You too can join this inspiring father-son duo in their mission to spread kindness globally by obtaining your Your Turn Now cards or inviting them to conduct a kindness workshop.

You Don’t Have To Be Aggressive To Get Things Done Either At Work Or Otherwise; Be Kind