Millions Of Indians Are Trapped In Bonded Labour, But This Mom Escaped The Illegal System

Posted: May 9, 2019
Tags:violence
Writers, Instagrammers, or Video Creator? Join us at the Orange Flower Festival on Jan 22nd!

This Mother’s Day, we celebrate and salute mothers who have triumphed over conditions of bonded labour, remaining hopeful despite it all. Here’s the inspiring story of Papamma and Chiranjeevi.

Mother’s Day is a celebration honoring the mother of the family, as well as motherhood, maternal bonds, and the influence of mothers in society. It is celebrated on various days in many parts of the world. This Mother’s Day, we celebrate and salute mothers who have triumphed through conditions of Bonded Labour.

Bonded labour is an oppressive form of forced labour where, due to a debt or other obligation (customary, caste-based, economic deprivation), the labourer forfeits certain basic rights and freedoms that are guaranteed by the Indian Constitution. Physical violence, verbal insults, brute force and sexual abuse are often common elements in bonded labour, making it a serious human rights crime.

Bonded Labour is a crime and was abolished in India by the Bonded Labour System (Abolition) Act of 1976. Yet statistics reveal that there are 1.84 crore bonded labourers in India today*.

Women who have been rescued from bonded labour recount heart wrenching experiences of being a mother in those circumstances. Long work hours meant they could neither adequately feed or take care of their children, nor spend time with them. Very often they had to watch their children lay hot bricks from the kiln to dry, tend and graze farm animals through the day, crush rocks with no protection or cut and roll tobacco leaves for hours. Experiences of miscarriages and lost babies because pregnant women were forced to keep on working are recurrent themes in their stories.

Here is a story of the triumph of a mother’s resilience, the story of Papamma and Chiranjeevi.

Papamma remembers the day she found out the 6-month old baby in her womb stopped moving. She was out at the brick kiln, making bricks in the hot sun since dawn. “I just knew something was wrong,” she says as she reminisces. “The owner of the brick kiln refused to let me take a couple of days off even though me and my husband Chiranjeevi requested him several times.” When she was rushed to the hospital, tests revealed the baby was not breathing.

They lost the baby and Papamma ended up in the hospital for a week. “I have never experienced another week like that,” she says as tears spring up in her eyes. “The owner did not allow my husband to come to the hospital at all, so I was all alone,” Papamma explains. A week later, the owner of the kiln forced her to get back to work.

This was just a glimpse of the life Papamma and Chiranjeevi lived out at the brick kiln in Ramanagara district of Karnataka for about 5 years.

They knew what 12-14 hour work days in the scathing sun felt like, especially on days when there was no money to buy the basics required to cook one square meal. They were not allowed to leave the kiln or go home to visit their families during festivals. Papamma remembers praying that all the 1200 bricks that she, her brother and sister-in-law made every day would come out “perfect” so that they would get the Rs. 500 – 1000 the owner would pay them at the end of the week. Sudden rain or even a stray dog running over still-wet bricks could damage them, causing the owner to cut their payment!

Chiranjeevi remembers the constant verbal abuse and threats that were thrown at them. The day his mother Shivamma was beaten up by the owner is still fresh in his mind.

“The good days when I was in school in the village with my parents and six siblings began to feel very far away – as if they had happened a long time ago,” says Papamma. When asked about her childhood, she smiles mischievously and recounts an occasion she remembers vividly.

While in school, Papamma enjoyed dancing at competitions, where she often represented her school. During one of the competitions she had practiced for, she suddenly fell ill just before the performance. “I was not daunted even though I felt unwell. I went for the competition and won the first prize for a patriotic song I danced to!”

Papamma says she enjoyed learning new things at school and had wanted to continue even after the 5th standard, but was pulled out of school with the question, “How are you going to support the family if you only want to study more?”

The circumstances that brought these two families into bonded labour were similar in nature, though they were recruited to work in this brick kiln at different times. They met at the kiln and Papamma describes how she and Chiranjeevi often worked alongside each other. “He was a good friend to have,” she says shyly.

It was Papamma’s brother’s wedding in 2011 that brought them to the kiln. The owner of the brick kiln was ready to give out Rs. 40,000 if all three of them (Papamma, and the newly-weds) began working at the kiln. In the case of Chiranjeevi, his grandfather and his parents were already working at the kiln when he joined them, reluctantly.

Their marriage was deliberated by the brick kiln owner, who convinced both families that it was a good move. Both Papamma and Chiranjeevi rejected the suggestion, since they had not considered marriage to each other. The kiln owner, devising it as a plan to retain the two labourers, explained how the respective family debts would continue to be paid off as Papamma and Chiranjeevi continued to work at the kiln. After much coercion by the families and the owner, the two of them agreed.

Stories of abuse by the kiln owners

After they were married, working conditions only got worse for all the kiln workers as the owner resorted to frequent physical abuse. Labourers in the kiln, who had been brought in from other places were also beaten and abused.

Papamma brings the story back to the few weeks after her return from the hospital. “I was very depressed and unable to work. My mind was numb. I did not talk much to anyone, even to my husband. All I could think of was the baby I lost…and those terrible days when I was left to grieve alone.” Chiranjeeevi took the responsibility of cooking and cleaning the house and even taking care of her as she slowly recovered. “That was when we began to talk about escaping this life,” Papamma recalls. They frequently spoke to each other and often thought of possible escape routes but were too afraid to try anything. “We were so sure the owner would find us and bring us back here, no matter where we fled. And the consequences after that would not be good.”

It was only about a year later, on the morning of August 13th 2014 that Papamma and Chrianjeevi saw a ray of light. “When the police and some other government officials arrived at the kiln, we were first shocked and afraid because we didn’t know why they had come. But when the brick kiln owner was forced into the police car, we began to comprehend what was happening.”

Papamma’s excitement is palpable as she paints a picture of the sudden hope that exploded among the labourers at the kiln. They recovered their courage and were able to recount their experiences to the government officials who had conducted the inquiry, amid threats and fear-tactics by the brothers and friends of the brick kiln owner. The 13 labourers who were rescued by the government and the Anti Human Trafficking Unit with support from International Justice Mission, were successfully taken out of the kiln and repatriated to their own homes with government attested Release Certificates.

In what turned out to be a landmark case in the fight against bonded labour and a significant development in the history of the criminal justice system in the State of Karnataka, Papamma and Chiranjeevi’s story took a new turn on 10th March 2017. The judicial decision sentenced the brick kiln owner to ten years of rigorous imprisonment and imposed a penalty of ₹16,000 on him under the IPC 370 (Trafficking of Persons) and Bonded Labour System (Abolition) Act, 1976. The verdict is the very first one of its kind in Karnataka where a perpetrator has been convicted under IPC 370 for a bonded labour trafficking crime. 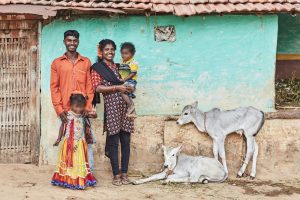 Today Papamma and Chiranjeevi laugh a lot as they take turns to run after their year-old son Sidharth, and Pallavi their 3-year old daughter sings to herself as she plays nearby. While they still await the rehabilitation funds due to them from the government, the family has a steady income from Chiranjeevi’s daily-wages employment as a plumber. He is quick to say he enjoys his work and finds it very fulfilling. Papamma takes care of the children and the home. “We are now living the lives we once thought we could only dream about,” she says simply.

*The Ministry for Labour and Employment has stated that the government will rescue and rehabilitate 1.84 crore bonded labourers in the country by 2030.

As told to Prashanti M, from International Justice Mission.

This November Let’s Pledge To Leave No Girl Behind