More Girls Than Boys Enrolling In Govt Schools Seemed A Good Sign, Until I Dug Deeper

Education and jobs are still a secondary affair for most of girls in the country, especially in rural areas. And as the author found out, those who do enrol are pulled out for the smallest of reasons.

Education and jobs are still a secondary affair for most of girls in the country, especially in rural areas. And as the author found out, those who do enrol are pulled out for the smallest of reasons.

As a woman or girl, if you find a field where girls outshine boys, you feel quite happy. Also girls joining odd jobs, breaking stereotypes is almost a good feeling. However, finding an arena where girls outnumber boys is not that easy.

There is one place where not in one case have boys outnumbered girls. If you look at data of the Government Primary Schools of Uttar Pradesh, you will notice that girls’ enrolment is always higher than boys.

On the surface, it might look like that. In fact, as a college student, I too considered this as positive sign. Wow, I thought. Gender discrimination is slowly disappearing and awareness about girls’ education is spreading in economically and socially weaker section, isn’t it? Data is suggesting so.

However, after couple of days at the primary school where I interned, the bubble burst. I was deeply saddened. The situation was worse than I could imagine.

The girls in the school had other siblings who didn’t enrol in government primary, but in private schools, the male ones! Parents assumed that private schools are better for quality education. Changing this perception and working hard in that regard was surely on my mind, but this mindset points out the discrimination and misogyny that is still prevalent.

Reason why the girls came to government schools

In my conversation with different male and female students, the reason that they cited for preferring government school turned out to be more disturbing.

I can be easily pulled out if needed

One of the girl said, “ammi khti hai sarkari me jabe jarurat howe bula to lenge, private me natak jada hai”. That translates to, “It’s easier to call girls back to home when needed.”

Education of girls is still a secondary issue for these parents. When these kids work at home the results are delivered instantly, and the parents don’t seem to have patience to see the fruits of their girls’ education.

My brother’s education is more important

Another cited inability to afford private school, and pointed out “babu k padhna to jada jaruri, hmara to biyah ho jayega.” What she meant was, “Brother’s education is more important because in the end I’ll marry and education is not compulsory for marriage.” This little one is growing up with belief that quality education is right of males, and for females, it’s an option. As she grows up, she will become part of this institutionalised discrimination unintentionally.

I go hungry at school, but get food at school

Another one said it’s the food that made her join the Government Primary School. Her mother continuously favours her brothers and she is often left without breakfast.

The male students had more enrolment in lower classes as 1st and 2nd. After that, they drop out from government primary school after learning basics and join private schools. The same is not case with girls, they continue education until 5th standard.

Moreover, if these kids grow up with the same perception, this cycle is not going to break because they too will follow footsteps of their parents and contribute to institutionalised discrimination.

On my part, I tried to ensure all those kids had access to quality education. I tried my best to erase the misguided beliefs they had. But it is still a matter of concern.

Not only at primary level but in higher education too, this discrimination is prevalent.

Throughout my convent schooling I always noticed that girls were less than boys. However, when I joined an aided government college for my B.Sc, girls were almost equal to boys in number. But the same is not trend if you look at colleges which have great infrastructure and a high fee – boys are more there.

Most of my female college mates married after graduating; a few were lucky to prepare for jobs and get one. Some are still preparing. But almost all the boys opted for higher studies, business, even odd jobs. None of them chose to marry immediately after graduating and become a househusband. 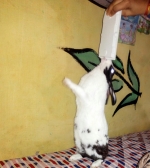