“We need to tell these tales embedded in our culture and imagination about the magic we have forgotten we possess, or are told we don’t, because the world is afraid of a female who knows she is powerful.” – Sukanya Venkatraghavan in the Editor’s Note to Magical Women

Having previously read and enjoyed books by many of the authors featured in Magical Women, I was eagerly looking forward to its release. When I pre-ordered it, I imagined that I would devour the book in a day or two, because that is how impatient I was.

The way things turned out, when the pre-ordered book was downloaded onto my Kindle, I barely had a second to glance at its gorgeous cover. I read the first couple of stories on a long bus journey and then was forced to keep it aside as I became busy again. Ultimately, reading in bits and pieces, it took me a fortnight to read this fabulous book.

Just as well, because had I rushed greedily through the book, I may have missed the nuances. I enjoyed spending an extended period of time with each story, savoring its moods and getting friendly with its characters. Each story in this book has something to give – be it a new tadka on the same old daal, or a strange new fruit from an alien planet.

Magical Women features women who own their power and who are not afraid to use it. They are unapologetic women who drink deeply from the waters of their own rage as they attempt to right wrongs and claim justice. They are in no mood to forgive, and in this the book speaks to the #MeToo generation of women, who are no longer willing to grin and bear it. These women do not whisper –they roar!

Each story does have its own unique flavor, and it is to Sukanya Venkatraghavan’s credit, that all these competing tastes are balanced.  Where Shreya Ila Anasuya’s story, Gul, leaves one with the ache of a lost love, S V Sujatha’s Gandaberunda, evokes a sense of danger and mystery. If  Tashan Mehta’s Rulebook For Creating a Universe, The Gatekeeper’s Intern by Ruchika Roy, Kiran Manral’s Stone Cold or Asma Kazi’s Bahameen, make you feel transported across space-time; The Carnival At The Edge of The Woods by Shveta Thakrar, or The Girl Who Haunted Death by Nikita Deshpande will lead you gently from the familiar to the new. While Sejal Mehta’s Earth and Evolution Walk Into A Bar, Tridevi Turbulence by Trisha Das or Apocalyptica by Krishna Udayashankar leave one contemplating darkly about the future of our planet, The Rakshasi’s Rose Garden by Sukanya Venkatraghavan makes one feel powerful and hopeful that rage can be channeled into creation and beauty.

And of course I have my favourites! The Demon Hunter’s Dilemma is a wonderful gender role-reversing take on the “damsel kidnapped by a monster” trope, featuring a heroine who is realistically flawed. The reader follows along as she questions her beliefs and forms new opinions. Shweta Taneja’s Grandma Garam’s Kitty Party is both hilarious and relatable. Featuring a young “chudail” who questions the ancient and traditional “chudailism” practiced by her extended family and who wishes to “go straight” so that she can live a “normal” life, it explores ideas of identity, choice and “normalcy.” 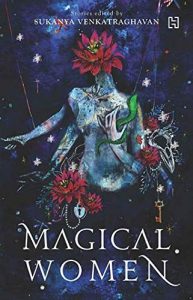 There were, however, a few creative choices that didn’t sit well with me, and while I understand that it is the prerogative of the author and the editor to include them, I as a reader reserve the right to question them. For example, in Apocalyptica, the Goddess Lakshmi uses a minor girl as bait in a honeypot trap to steal something from a man. She does feel bad about it, but not enough, obviously. And while in the end, she does shield the girl, one does question if the child should have been exposed to such a situation in the first place. If the ends justify the means even for divine, all-powerful women, then how are they different from the monsters they claim to destroy?

Perhaps that is the point –that the divine and magical are as flawed and fragile as the rest of us. That good and evil are not as easily separated as we would like. Magical Women reveals the ugliness within us as much as it revels in the beauty and power of womanhood.

In the pages of the book are women who are lovers, warriors, witches and goddesses, and it is never obvious who is “good” and who is “bad.” Just like us non-magical women, they are complex creatures of shadow and light.