Comedy is a tricky premise. You either win all guns blazing or fall flat. There is no in between. The Marvelous Mrs.Maisel delivers and does it in a fiercely feminist way.

The Marvelous Mrs. Maisel is one such experiment that fared well enough to receive many accolades for its cast and storyline. However, as an Indian viewer, it is sometimes hard to interpret the jokes – since we are unfamiliar with the socio-cultural background in which they are set. The late 1950s in New York City are something beyond our imagination of course. Maybe some of the jokes couldn’t tickle our ribs, but the message they deliver is always loud and clear.

As an Indian woman, I have always believed that the emancipation of woman will happen first through education, and sexual liberation shall follow. This I found hard to understand in The Marvelous Mrs. Maisel, where the women seem to be sexually liberated, but there is no due importance given to education. Mrs. Weissman manipulating the female students in their post-graduate year into believing that the Master’s degree has no value but to find a man, that it is the ultimate purpose of studying in a college seemed very out of place given the level of independence women were entitled to in the show. Well, again as I said, I do not completely understand the background of the show.

A woman who discovers her voice

The synopsis of the show, as the director herself says, goes like this: “I wanted to do a story about a woman who thought she’d scored… She’d gotten it all, and then, bam, it all falls apart, she discovers an ambition and a need to speak, and a voice that she frankly didn’t know was there.” How accurately she has captured it! When Midge gave her own version of stand-up on becoming Mrs. Maisel, little did she know that this would become her profession later.

The show had me scratching my head at times but has always managed to reason it out in the following episodes. One such instance is Midge referring to herself as Mrs. Maisel (though reluctantly) to people around her even after turning down Mr. Maisel clearly. She uses her surname to everyone, except on stage, and only when she thinks she can be Mrs. Maisel again, does declares herself as Mrs. Maisel to the whole world on stage. But bam again!

There are 4 scenes that were marvellous enough to scream to the whole world, “Yes we are feminists and we are on a path to conquer the world.”

As women, keeping the marital status intact is something that is second nature to us.

Midge too fits this role perfectly with her husband Joel Maisel. But once all hell broke loose, she was not that damsel in distress waiting for her knight to come back and sweep her off her feet anymore. The scene when Joel returns, asking her to give it one more try would have convinced anyone in desperate straits but Midge. Though she was totally broke without a day job (at that time) or any definitive goal to look forward to, she was clear that she could find a way to put her life back on track without her ex-husband who walked away from her over another girl.

Her reasoning is lucid: “Because you left”. You cannot simply walk away from someone who has pledged their life to you and come back just because things didn’t work out the way you expected. To look into it more deeply, Joel did not apologize; He did accept the mistake but did not take the blame on himself – instead, he generalized that “maybe” it was a mistake. But whose mistake was that? He simply came back because he was unhappy with his new found love and lifestyle. If he had been happy, he would not have come back.

Why on earth should women entertain such bullshit? Midge may not have figured out her roadmap to a secured future but that did not stop her from turning down her opportunistic ex with a simple yet powerful “No.” 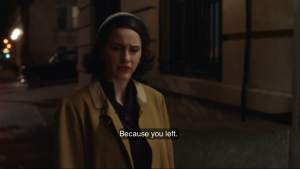 No Thanks.  We are done with your helplessness masquerading as love.

Women will fix it and accessorise it

“My father says, my favourite part in the newspaper is the ad for shoes. That makes me angry. They put these ads to distract us from the news.  Because if women don’t realize what’s going on in the world, they won’t step in and fix it. Because they will fix it and accessorise it”, says Midge. 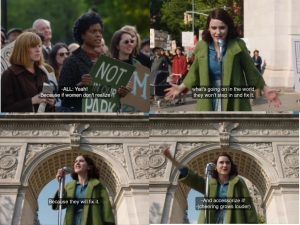 Time and again, women are kept away from politics on the grounds that they don’t know anything. But the actual reason is what Midge puts forward. Because they will fix it and accessorise it, and the world is not ready to face that. Apparently, there could be nothing more terrifying to them than having women at the giving end.

Women are labeled better administrators at home to limit their presence only there. In the crooked view of patriarchy, the able administrators at home become good for nothing when they dare to fix things outside their homes. However, the blame has to be shared by women as they are generally distracted by juvenile pleasures that they fail to find access to more important issues. The results are harvested by men, while most women still keep finding happiness in petty matters. Correcting a smudged eyeliner takes away more of our time than rectifying the political issues around us. Women are made to believe that petty matters matter most.

“Nari Shakti” is the Oxford Hindi word of the year as it captures the prevailing ethos, mood or preoccupations of the passing year and is judged to have lasting potential as a term of cultural significance. But sadly, the meaning and purpose have not reached everyone much. Nari Shakti (Women Power) demands us to come out of our cocoons and fix the wrong in the world and accessorise everything in it. Only when women accessorise something, it becomes devoid of the social stigmas and becomes truly open to the whole world irrespective of any form of discrimination.

Enough with the inhibitions. Let us fix things that need to be fixed and accessorise them.

Susie is that badass friend every woman needs. Got a problem? Pour a goddamned tequila and get all the f&^%ing nonsense out of your system. She is that friend who will whack some sense into a friend lamenting over any f*&^ing thing. Hey, but she doesn’t want to be friends with anyone. Susie initially defines her relationship with Midge as ‘Partnership’ and later upgrades it to ‘Connection’. Some really good improvement there!

“Bull shit. You are not an idiot. Just drop that doe-eyed Bambi thing right now. Okay. I’m sick of you acting all innocent. “Oh, I don’t know how the world works, because I’m a housewife and I wear four layers of petticoat.” It is tired and it is weak. And you are not tired and you are not f&^@ing weak.” Susie schools Midge. 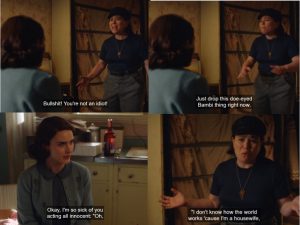 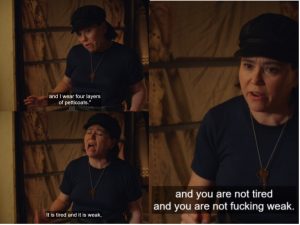 A brutally honest friend like Susie is the best thing that could happen to anyone. A woman’s problems are fuelled by the surroundings that victimize her so much so that she feels better being a victim rather than a warrior. The solace women find in being a victim is what stops them from taking on the screwed up system that made them victims in the first place.

The moment a woman resigns her innocent self and unleashes the bitch in her is when she is going to go places. There is no way that doe-eyed Bambi thing is going to work in a world full of assholes ready to pounce on us and push us to all the extremes to bring out the beast in us. You are never tired to let go of a battle and never f&^%king weak to lose it.

Why do women have to pretend to be something that they are not? 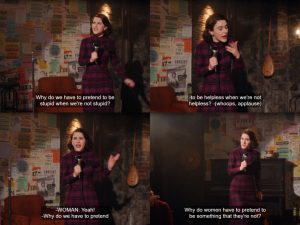 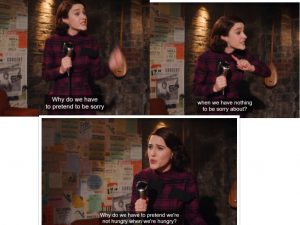 This comes from a woman who used to pretend even for silly things to keep her Mr. Perfect happy. Midge is that kind of woman who gets her hair and face done just before her husband wakes up to make sure he doesn’t have to risk seeing her ungroomed self. She even goes an extra step to unhook her bra just before sex so that her husband need not go through the tedious process of unhooking a bra. She wanted to be that lovely dovey wife who takes a 1000 extra miles to be the eye candy and handy doll to her husband. Apparently, a trait she has inherited from her mother.

It won’t kill us to stop pretending and let the goddamned hair look disoriented; to look crappy; to smell foul; to gorge on the food; to talk shit; to make mistakes; to be loud; to be brutally straight-forward; to not fake a smile to an asshole; to not sweet talk in a tiring situation; to forget what the world expects from us and love the way we are without any societal filters.

Put that on your plate, ladies!

Why Shouldn’t I Keep My Original Surname After Marriage?