What We Talk About When We Talk About Rape by Sohaila Abdulali is a powerful, solicitous and hard-hitting read which has the potential to create history.

Rarely does it happen that a book leaves me flabbergasted, shattered and reassured, all at the same time.

With the “Me Too” movement gaining momentum and changing the conversations around the subject of rape and consent, the timing of this book could not be better. This is an important read for all of us because the truth is that whenever a rape happens, we are all the victims – some of us realize it, some don’t.

There are many things about this book that one cannot define in quintessential ways and that is its real strength.  If someone asks me the genre of the book, I wouldn’t know how to answer this. If someone asks me about the writing style of the author, I would say it doesn’t really matter. Neither does Sohaila Abdulali claim to educate the masses about rape nor does she come across as patronizing at any point. She raises the right questions time and again, even though she might not have the answers to some. She makes us introspect and contemplate about our own behavior which is interesting because many of us think we are progressive and are doing it all right, but in reality we are not there yet.

The author takes a 360 degree view, if I may call it that, on this extremely sensitive and discomfiting topic and not only does she focus on what we talk about rape but stresses more on what we don’t talk about rape. Her in-depth analysis and understanding does not just come from the place of being a rape survivor herself, but also from being someone who has actively been involved in counseling survivors.

At the very beginning, she shares her own harrowing experience of being gang raped in the presence of a friend in the year 1980 when she was all of seventeen years old. She narrates how she penned a poignant account for a women’s magazine in the early 80s on surviving rape which created a trifling stir in the country because in those times, no one spoke about rape. It was soon a forgotten story only to resurface years later after the ghastly 2012 rape case shook the entire nation. Her story went viral, forcing her to face what she was trying to get past without any warning. And then this book happened!

Talking of rape as Indians

Having worked as a counselor with an NGO that rehabilitates human trafficking survivors, I do understand that there are so many complex layers to unfold as we try to comprehend the cause of rape not just in India but anywhere in the world. However, as I read through the different chapters, I realized that there are little nuances about our behavior and talks which we fail to notice, deterring us from being able to deal with the problem head on.

Typically, the conversations around rape are limited to consent and harsh punishments. But, Sohaila Abdulali makes us recognize that we need to go beyond that, and make these dialogues all inclusive, specifically mentioning about how we seldom involve trans people and sex workers in these significant discussions. There is a lucid explanation of consent, and how it is not as simple as saying a “yes” or a “no”.

For a long time, I thought rape was more about power than sex, which of course is true, but now I know that we cannot keep out sex from our conversations if we want to tackle this issue. The book talks about various scenarios from marital rape to date rape to incest, each viewed differently because of the different dynamics involved, although the crime is same. The survivor tales are distressing to say the least but are necessary to drive home the point, loud and clear.

Including toxic masculinity and male ‘protectors’ in the conversation

My favourite chapter in the book is “How to save a life” which cajoled me to think outside of the obvious. It discusses toxic masculinity and the impact of rape on men who are witnesses to the horrific crime but are not able to intervene. How many of us bother to think about this? This just re-affirms why patriarchy is harmful for everyone because men are expected to protect the honour of women and being witnesses to the rape of a loved one is a double blow for them. What also gave me immense hope in this section of the book were stories of heroes who make a difference. They reinstate the lost faith and reignite the extinguished flame. 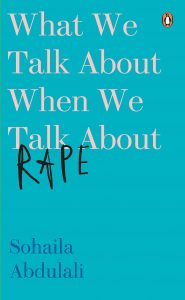 I think ‘The Abdulali guidelines for saving a rape survivor’s life’ should be printed and distributed to one and all. Each one of us needs to know them, no matter how well-read and aware we think we are. We need to be ready to unlearn and re-learn because many a time our actions or words are well-intentioned but detrimental to the cause. For instance, in one of the chapters, Abdulali makes a case for looking at rapists as humans, which I would have never bothered to do earlier. She elucidates why violence is not the answer to violence and that furiously demanding public castration of rapists is not quite a laudable reaction. This made me pause and reflect. I evolved as a person by the time I reached the end of the book because every word in this literary work is a journey, a lesson and a plea to rise above our egos and intolerance to make the world a better place.

To sum it up, What We Talk About When We Talk About Rape is a comprehensive, honest and enlightening attempt to normalize the discussions around rape. It is also a guide for parents, mentors and guardians on how to approach this matter with the next generation. For all this and more, it is an extremely important read. Did I say this before? Well, I would say it a thousand times over. Read it. Absorb it. Share it. Re-read it.

I want to conclude by quoting the lines from the book that I believe should be drilled into the minds of every living human in the world.

‘I want to be very clear that it is never a victim’s obligation to speak up, or report, or do anything but survive. Her first responsibility is getting through it. But we are all culpable in the silence around rape, a “vast international conspiracy” if ever there was one.’