Because He is… by Meghna Gulzar is a personal narration – a daughter’s perspective of her illustrious father-writer-poet-director Gulzar’s accomplishments.

While the writing may be by the daughter, the book aptly opens and ends with a word from the legendary writer-father himself.

I haven’t read many memoirs or biographies – Anne Frank being the only one I’ve read, if I remember correctly – simply because somehow non-fiction doesn’t hold the same charm for me as fiction. Also, for some inexplicable reason, I’ve always considered biographies would be too boring to hold my attention for long. For this reason alone, I’ve steered cleared of them.

This book, however, was one I couldn’t possibly resist for three reasons.

One, it was about Gulzar – for me, the best writer in Bollywood. I’ve always admired Gulzar as a writer and lyricist, and this book would, hopefully, offer some insight into his writing process and journey, I thought.

Second, I have immense admiration for the film-maker that the author, Meghna Gulzar is. Her debut film, Filhaal, was one of the earliest women-centric films that had made an indelible mark on the young rebel girl that I was. Her recent film Raazi had ensured my respect for her would only grow. As a result, this was one book I was extremely keen to read.

Third, being an only child, I have a similar close relationship with my father. This book, based on the relationship of a single girl child and her parent, was sure to be right up my alley.

The book is divided into various sections (not much different from chapters) which, based on the theme each chapter deals with, chronicles the writer’s life and shares more details of his professional as well as his personal relationships. Each chapter ends with a meaningful poem penned by Gulzar himself, which adds a rich depth to his daughter’s words.

In addition to the stories and anecdotes – which the book is replete with, an added bonus are the many photographs, which make one feel like you’re sitting in their home, browsing through their personal album while listening to them regale you with happy stories from ‘those by-gone days’.

The personal anecdotes – whether they be of Gulzar as an eleven-year old child during Partition, or as a hands-on father to Meghna – create a sense of intimate bonding with the reader, offering them an insider’s view into the family and their world. The surprise element is how the reader discovers more about the man and who he is as a person, parent, and creative artist. The daughter’s perspective is an interesting angle which makes the book different from most biographies, and her father’s influence on her is evident in her writing and life’s choices.

The book interestingly begins with Meghna’s birth, as, in her own words, before that she wasn’t there to witness his beginnings.

It was fascinating to read how seriously Gulzar took his fatherly responsibilities – whether tying her shoelaces while getting her ready for school, or disciplining her without instructing the young girl at all.

The relationship between the subject of the book and its writer is, admiringly and most unusually, one of mutual respect despite being parent and child in real life. It is evident how Gulzar encouraged her growth – creatively and intellectually – by not imposing his own opinions or rules on her. Meghna shares how in an interview he had said that parents, despite being biologically older than their child, in their experience as parents were only as old as their child. This, for me, was a sage piece of advice.

His feminist attitude comes through in his views and conduct, and has, no doubt, made Meghna the sensible intelligent woman she is. It was heartening to read how she was free to make her own choices – from books to men! Despite being as indulgent as he was-writing books for her or giving her all his attention, never once does he let it interfere with his responsibility as a father to inculcate good values in the child.

One of my favourite anecdotes is how Gulzar’s refuses to give her money when she asks for it. As he explains in his foreword, ‘it is not wealth or resources that make the difference, but attention, concern, and time’. I couldn’t help but draw happy comparisons between Meghna’s childhood and my own.

It is obvious that Gulzar’s initial years would have shaped his thought process and beliefs, and later influenced his writing. His struggles have made him the person he is and led him to the life he lived – that of a writer. There is a section where Gulzar shares his own feelings of visiting his birthplace after seventy years, and one can’t help but feel the same emotions of pain, loss, and regret.

Meghna doesn’t shy away from asking questions that dig deeper into the life and emotions of her Papi (as she calls him) or making statements that reveal more about their private lives as a family. Same goes for the difficult phases of her father’s life – whether it be his pre-fame struggle or his failed attempts at having a family.

For example, this incisive observation and subsequent question from Meghna – ‘Papi was thirteen years old when he moved to Bombay, to an alien city and an unfamiliar life. I wondered if there was a time when he was overwhelmed by his circumstances? Did the little boy break down and cry?’ The narrations of the Partition are heart-rending, while the anecdote around his birthdate or when he first visited Bombay, are amusing and heart-warming.

I was pleasantly surprised to read about the relationship between Gulzar and Rakhee. It is admirable how the story of their romance and later, their unfortunate separation is devoid of any resentment towards either parent or mention of any salacious gossip (not even to discredit any false rumours that may have spread at that time). While it’s obvious why anyone from a broken home would avoid the more intricate and, possibly murky, details of their parents’ separation, I had actually presumed that the author would sidestep that aspect of her father’s life completely. Instead, not only does she tackle it head on, she actually analyses it with objectivity and displays a keen and deep understanding of relationships.

An entire chapter is dedicated to Rakhee – Gulzar’s wife and Meghna’s mother, and is indicative of the immense respect Gulzar has for his wife, even after their separation – the unfortunate reality of which rears its head, but Meghna handles it deftly. Her writing style hits home most poignantly when she talks about her parents’ separation right after a trip they took to Kashmir. ‘As we returned from Kashmir, paradise got left behind. Papi and Ma went their separate ways.’

She shares how she was raised to respect the unknown reasons and appreciate the amicable separation, and how her parents continued being friends with each other despite not being a married couple. It speaks volumes about the maturity of the estranged couple. A sense of admiration grows as one reads about they handled their separation and how they explained it to their daughter as well.

This exemplary behaviour by her parents would no doubt have influenced the author too. For, it is evident in not just the writing skill that Meghna displays, but also in how she herself dealt with the reality of being from a broken home – with sensitivity and dignity – something that is all too evident in her books and films.

Gulzar, the writer and film-maker

His journey from Sampooran Singh Kalra to Gulzar evokes a sense of admiration – for his determination to continue on his chosen path despite all the struggles he endured, as well as for the craft of poetry and writing.

Revelations like how Gulzar was considered the ‘black sheep’ of the family or how he had no literary background and his family wasn’t very encouraging of his fondness for Literature, or even his aversion to become a songwriter in the first place, come as a surprise and make the reader value Gulzar’s struggle, his efforts and his contributions even more. It’s a lesson for every writer, and his story not just inspires but also teaches valuable lessons. 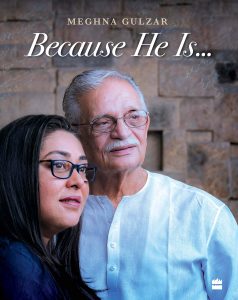 For example, he once stamped another author’s book with his own name just to see how his name would look on a cover – this made me smile in understanding. Other intimate disclosures like Gulzar stealing a book from a library owner have one laughing out loud. The story of how he first became a lyricist in Hindi films makes one believe in destiny for there is no doubt that this is what Gulzar was meant to do all along. Our affection for the young writer that was Gulzar grows in leaps as does the respect.

Gulzar’s respect for women isn’t just restricted to treating his wife and daughter with respect but also in how he perceived women in general. This is more evident when the author narrates how Gulzar was influenced by famed author Sarat Chandra’s stories in his portrayal of women.

The literary connection between Gulzar’s films and the stories of Sarat Chandra Chattopadhyay or Munshi Premchand has always been common knowledge but the way the author tells the story of the making of these films is what makes one more aware of his prowess as a writer and director. Further, Gulzar’s take on the original stories by these literary geniuses, and how they influenced him, and his work adds a whole new insight into his work.

The book holds immense wisdom in its pages, and not just regarding parenting and relationships, but also life in general. In addition, it is an insightful, warm, read about a father-daughter bond.

I haven’t read many celebrity memoirs or biographies, but I know, even if I do, this one would probably remain at the top in my list of favourites.

If you’d like to pick up Because He Is… by Meghna Gulzar, use our affiliate links: at Flipkart, at Amazon India, and at Amazon US.

If You Have BIG Writerly Dreams (Like Them), Let’s Talk About How To Get Published In India

“I Think No Issues Are Women’s Issues, These Are All Human Issues”: Pooja Priyamvada, Author Of The Month, June 2018